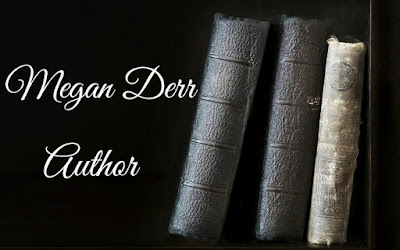 Megan Derr is an outstanding writer. Having recently discovered her I've done my best to read whatever I can of hers. She has a talent that she THANKFULLY shares with all of us and I'm thrilled to have her as my Saturday Author Spotlight today.

We are going to do an interview, look at her work, and of course wrap it up with a giveaway. So, grab that coffee, tea, wine, whatever and enjoy. 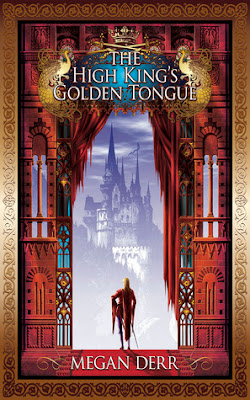 Prince Allen has trained his entire life to follow in the footsteps of his illustrious mother, who has made their kingdom one of the wealthiest and most influential in the empire. For the past few years he has trained to become the new consort of the High King. The only thing no one prepared him for was the stubborn, arrogant High King himself, who declares Allen useless and throws him out of court.

High King Sarrica is ruling an empire at war, and that war will grow exponentially worse if his carefully laid plans do not come to fruition. He's overwhelmed and needs help, as much as he hates to admit it, but it must be someone like his late consort: a soldier, someone who understands war, who is not unfamiliar with or afraid of the harsher elements of rule. What he doesn't need is the delicate, pretty little politician foisted on him right as everything goes wrong.

Publisher note: this is a highly expanded, completely re-written version of the free short that was previously available under the same title. 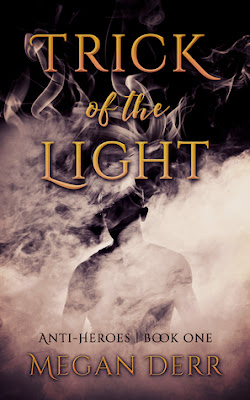 Karl leads a quiet life—quieter than he wants, especially since getting into a fight with one of the most powerful men in the city—but it could be worse. In a city where super heroes and villains can level a city block in a moment, it's a good day when nothing is destroyed, especially for the man who sells super hero insurance.

After yet another date stands him up, Karl heads home for another night spent reading with only his cats for company. But a strange sound at the bus stop leads him to a shocking discovery: Trick of the Light, a notorious villain in possession of an impossible power, and currently the intense focus of a man hunt by the Grand Order of Defenders.

But Karl has never had much respect for the Order and its arrogant, cavalier super heroes. Whatever the risks, he'd much rather spend the night helping a villain, especially since once Trick is well enough to move Karl will probably never see him again… 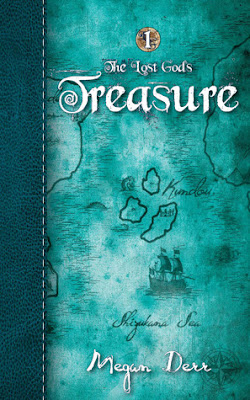 Nine gods ruled the world, until the ultimate betrayal resulted in their destruction. Now, the world is dying and only by restoring the Lost Gods can it be saved.

Nine hundred years ago, the Dragons of the Three Storms, gods of chaos, tried to destroy their land of Kundou. Only by rising up and slaying the Dragons and stealing their power was Kundou saved. Now, that power resides in the royal family and grants them the right to rule.

But that power comes at a terrible price, and Prince Nankyokukai is determined that he will be the last to pay it—even if it means surrendering his chance with the man he has waited for his entire life.

Thank you so much, Megan, for being my spotlight today. You are a very new to me author but the second I read The High King’s Golden Tongue I found myself scrambling to read as much of your work as possible. I have some questions for you so I can get to know you better and so your fans can too.

Thank you very much for having me J And I'm still giddy you enjoyed High King so much.

One thing that struck me as amazing the second I opened The High Kings Golden Tongue was the map of the lands you cover in the novel. I immediately thought of Lord of the Rings and Game of Thrones with the amazing detail and creativity. What insured the land names and what made you choose a made up world over one we already know?

Fantasy has always been my favorite place to play. I love starting from scratch and making up the cultures, magic systems (though this world doesn't have those) and so on :D Contemporary can be fun, but it's never been my thing. I've been a fantasy junkie from day one.
The land names I just made up. You can see where some of them were bastardized real words (Gaulden I just took Golden and changed the o to au) but mostly I just jumble letters together and see what I come up with :3

Where did the inspiration for THKGT come from?

It was a prompt I took on in the MM Romance Group's Love is Always Write event a few years ago now. At the time I could only manage a short story with the premise, but once my plate was cleared I took it and made it the longer story it always wanted to be.

Trick of the Light is your newest release and the first book of what looks like is going to be an awesome series. I recently read it and loved it. Can you tell me what sorts of things we will see in this series?

Plenty of shenanigans J Dixie's story is up next, and he is heavily involved in the systems that the bad guys rely upon, and he's determined to fuck that system up. The third story is about a character mentioned briefly but not introduced until the second story: Byron, and there is much more to him than anyone has ever realized. Lots of heroes and villains still to come, and it's all just going to get messier ;)

Are you a fan of superheroes and if so are you a DC, Marvel, or Dark Horse fan and who’s your favorite Superhero or villain?

I'm a huge fan! Not as big a one as my brother, who knows like PILES of stuff that blows me away, but I followed some of them as a kid, fell out of it, and came back several years ago when they started getting more mainstream attention and dragged me back in. I'm equal opportunity. Batman was probably my first true love, right now I'm loving Thor as a woman, and I'm super stoked for the Deadpool movie coming out soon.

Who are some of your favorite authors to read?

What are some the hardest parts of writing a book and what are some of the most rewarding?

The end is always the hardest part for me. The closer I get to the end, the slower I write. I've read so many books that were so good right up until the end fucked it all up, and that has instilled a paranoia in me. So the end is my struggle.
The fall out is where I always have the most fun. That moment in the book where everything goes to shit, everyone is angry and hurt and apart… and then I get to write it all coming back together and that's the best moment, really and truly. All that work, all that dithering and struggling and fearing, to finally get to the moment at the end I was afraid of where it all comes together is the best.

If someone was to come to your home and see your writing station, what would they see?

Something a lot like this, though probably hella messier and with at least two cats getting in my way 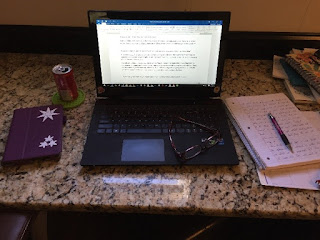 If there was a soundtrack for your life, what would it be called?

What are you currently working on and what can we look forward from you in 2016?

Literally today I am working on Twilight, a sequel to Midnight that I never thought I would write, but I cannot say no when some people ask (Sasha and Kitty in this instance). But I am also juggling the third Anti-Heroes book, some more Dance with the Devil short stories, the last book in the Engineered Throne trilogy, and a book set in that same world, but on a different continent, called Hammer & Powder.
Coming in 2016 there is lots: The Pirate of Fathoms Deep, the sequel to High King, Shield of the Dragon, which picks up a couple of months after Sword of the King, and The Painted Crown which is the sequel to The Engineered Throne. There's other, smaller stories, but those are the big ones :3

Thank you, Megan for taking the time to answer my questions. It’s been so much fun!

It's been loads of fun, thank you again for inviting me ^__^

Megan Derr is being awesome and will be gifting one person ANY 3 books of hers.
Simply fill out the rafflecopter below. Winner will be contacted via email.
Contest runs until February 5th!

I want to thank Megan for being here today and I want to encourage you ALL to check out her amazing work. She's not an author you want to pass up!

Read what you review. It matters.

a Rafflecopter giveaway
Posted by Diverse Reader at 5:22 AM