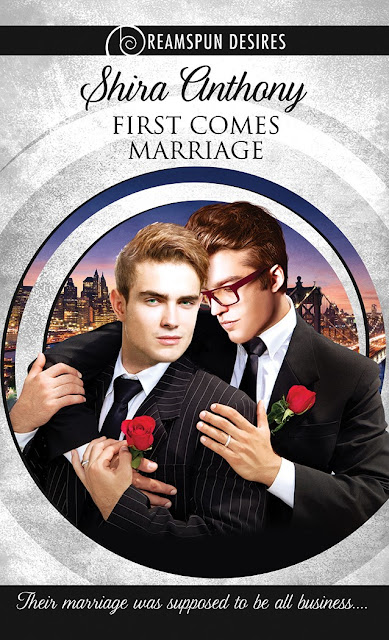 Shira: Thank you Meredith and Diverse Reader for hosting the First Comes Marriage book tour! For those readers who may not already know, First Comes Marriage is the second book in the brand new Dreamspun Desires line of gay category romances from Dreamspinner Press. Be sure to read to the bottom of the post for an excerpt from the book, as well as the Rafflecopter giveaway for the book tour. You could win a dozen red roses for your sweetheart or yourself!
First Comes Marriage is an honest to goodness “category romance,” reworked for a 21st Century audience, and of course with two male main characters. The term “category romance” comes from the old tradition of publishing a certain number of books on a monthly basis in a certain category. When I was a kid, these were the Harlequin and Silhouette romances that were shipped, 4 books a month, on subscription. I took one trope in particular from those classic romances, the marriage of convenience, when I wrote First Comes Marriage. It’s one of my favorites and I hope you’ll enjoy it too.

Blurb:
Their marriage was supposed to be all business....
When struggling novelist Chris Valentine meets Jesse Donovan, he’s interested in a book contract, or possibly a date. The last thing Chris expects is a marriage proposal from New York City’s most eligible bachelor!
Jesse’s in a pinch. To keep control of his company, he has to marry. So he has valid reasons for offering Chris this business deal: in exchange for living in a gorgeous mansion for a year, playing the doting husband, Chris gets all the writing time he wants and walks away with a million-dollar payoff. Surely Chris can handle that. He can handle living with the most handsome and endearing man he’s ever met, a man he immediately knows he wants in the worst way and can’t have. Or can he?
~~~~


Excerpt from Chapter Nine
Jesse threw the Frisbee back toward Chris, who ran backward and jumped to catch it.
“Where’d you pick up those moves?” Chris threw the Frisbee back again.
“Mostly taught myself.” Again, Jesse easily caught it. “I used to meet up with some guys in the city on the weekends when I got my apartment. Central Park league.” Jesse threw the Frisbee underhand and it arced toward the beach, forcing Chris to slide to catch it.
“I’ve lost count.” Chris returned the throw, forcing Jesse to run into the water this time.
“Five for me, seven for you. I gave you two for the slide.” Jesse grinned, then sent the Frisbee soaring in a high arc that started to fall into the water a few feet in front of Chris.
Chris laughed and chased it into the waves, reaching up as he ran. The tips of his fingers made contact with the disc at the same time his left foot slid on a rock. Shit! He did his best to maintain his balance while grabbing at the Frisbee, but he wasn’t used to catching in the water. He fell face-first into the surf right as a wave broke in front of him. He coughed and spluttered as he raised his head above the water, face plastered with hair, mouth full of salt water.
“Chris!” Jesse shouted as he ran toward Chris. “Are you okay?”
Chris held up the Frisbee. “Does this count as a trick catch?” he said.
Jesse started to laugh. “I think you deserve extra points for that one.” He grabbed Chris’s wrist and pulled him to standing just as another wave came crashing in. This time they both ended up in the water. “Great.” Jesse laughed again.
“It’s fucking cold, you know.”
Jesse held out a hand and Chris gladly took it. “I wasn’t planning on swimming. That was your idea.”
“Good one.” Chris laughed and fell onto the sand, hair dripping, clothes sticking to his skin. Jesse stood over him and shook his head. “So who won?”
“I think I did,” Jesse said as he slipped his T-shirt over his head and hung it over a nearby rock. “But I’m still happy to take you to dinner.”
“Works for me.” Chris shivered, partly from cold, but partly because seeing Jesse without a shirt, nipples peaked from the chill, was making him wish he could kiss Jesse right now.
Jesse retrieved the blanket. “Shirt off,” he ordered. “We don’t need you getting sick.”
“Old wives’ tale. You don’t get sick from cold water.”
“Yeah, but hypothermia isn’t something you want either.” Jesse helped Chris off with his shirt and wrapped the blanket around him.
“You’re cold too.”
“I’ll be fine.” Jesse rubbed Chris’s arms through the blanket, creating centers of warmth that traveled through his body to places Chris would have preferred to stay out of the mix. “I’m the crazy idiot who likes polar bear swims.”
“Polar bear?” Chris was starting to feel the warm fuzzy of Jesse’s arms. Even through the fabric of the blanket, it felt damn good.
“You know the people who swim in Lake Michigan in the dead of winter?”
Chris nodded.
“My grandfather used to do that with me. I’m impervious.”
“So, Mr. Impervious,” Chris ventured as he sat in the warm sand and began to warm up, “why are you shivering too?”
Jesse narrowed his eyes, but when Chris ignored him and lifted the blanket to invite him under, Jesse didn’t argue. “I’m used to getting my way, you know.” One corner of Jesse’s mouth quirked upward.
“I guessed.” Chris leaned against Jesse and tried to focus on something other than his hardening dick. Amazing that it wasn’t so frozen that it wouldn’t respond. Not that the wet jeans felt all that good, but Chris liked having Jesse’s skin against his.


This is the first of Dreamspinner’s Dreamspun Desires books I’ve read! I LOVED IT! I’m such a sucker for a great love story. Two men come together, sign a contract to save a legacy, and in doing so fall in love *sigh* what’s not to just swoon over?
Chris and Jesse are so freaking adorable. Jesse broke my heart. His relationship with his step grandmother, that just tore me up. And Chris… he has a huge hang up and well, these guys are in a tangled mess and of course it takes the love of ONE man and one lovely woman to make them shape up.
Shira Anthony brings us a sweet and emotional love story that will have to taking deep breaths and wishing it never ends!

~~~~
All about Shira
Shira Anthony is a complete sucker for a happily-ever-after, and rarely reads or writes a story without one. Never a fan of instalove, Shira likes to write stories about real men with real issues making real relationships work.

In her last incarnation, Shira was a professional opera singer, performing roles in such operas as “Tosca,” “Pagliacci,” and “La Traviata,” among others. Her Blue Notes Series is loosely based upon her own experiences as a professional musician.

Shira is married with two children and two insane dogs and when she’s not writing, she is usually in a courtroom trying to make the world safer for children. When she’s not working, she can be found aboard a 36’ catamaran at the Carolina coast with her favorite sexy captain at the wheel. She’s given up TV for evenings spent with her laptop, and she never goes anywhere without a pile of unread M/M romance on her Kindle.

Interested in hearing Shira sing? Here's a link to a live performance of Shira singing an aria from Puccini's "Tosca": http://www.shiraanthony.com/wp-conten...


~~~~
Giveaway:
First Comes Marriage is all above love and romance, and Shira’s grand prize is a dozen red roses for your sweetheart (or whoever you think deserves it!). First prize is a $10 Dreamspinner Gift Certificate. 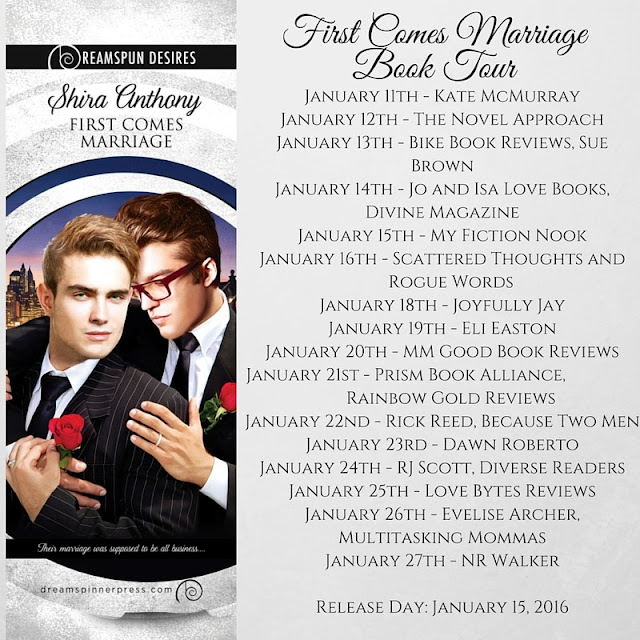 Posted by Diverse Reader at 6:03 AM