Book of the Week: The High King's Golden Tongue by Megan Derr #Review 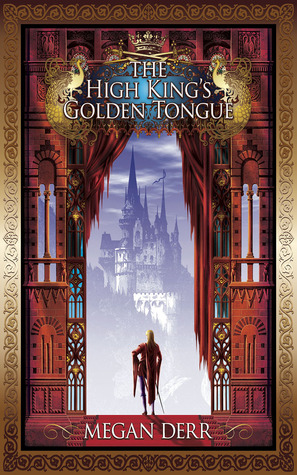 Prince Allen has trained his entire life to follow in the footsteps of his illustrious mother, who has made their kingdom one of the wealthiest and most influential in the empire. For the past few years he has trained to become the new consort of the High King. The only thing no one prepared him for was the stubborn, arrogant High King himself, who declares Allen useless and throws him out of court.

High King Sarrica is ruling an empire at war, and that war will grow exponentially worse if his carefully laid plans do not come to fruition. He's overwhelmed and needs help, as much as he hates to admit it, but it must be someone like his late consort: a soldier, someone who understands war, who is not unfamiliar with or afraid of the harsher elements of rule. What he doesn't need is the delicate, pretty little politician foisted on him right as everything goes wrong.

Publisher note: this is a highly expanded, completely re-written version of the free short that was previously available under the same title.

I don’t know where to begin with this book. I finished it last night and literally had to sleep on it. It rendered me speechless. It was so much more than a book. It truly was an entire experience. I felt involved in what was going on and every facet of what happened affected me. It’s a rare thing that a book pulls me in like I’m a character in the Neverending Story. I felt like I needed to get my butt over to Harken and deal with things LOL.
This is the first Megan Derr book I’ve read and I promise you that it is far from the last. She’s a freaking literary wizard I tell you!
Allen… oh Allen. What an outstanding character. Smart, stronger than any soldier ever, kindhearted, and his ability to love? It’s like art. Rare and beautiful!
The King? Well. I got his pain it made sense. I think he blamed and rejected all the wrong people but in the end he got himself together.
The ensemble of characters. It was like finding a pair of shoes you love, seeing there’s only one pair left and they’re your size… and on sale! It’s a miracle and you never want to take them off. That was this cast!
I had one heck of a book hangover afterward. I couldn’t watch TV, I was staring out the window actually wondering what these characters were doing right now. LMAO! I know, ridiculous, but it was that breathtaking!
I want to keep talking about it hahahaha!!! The descriptions, the work Megan went into to create this land! WOW! I mean I can’t even imagine the notebooks and post it notes!!!!
I want to say it’s the best book I’ve read all year but the year just started! I will say I won’t forget it, ever and that the second there’s a second book to this series I’m devouring it!
AMAZING!

Posted by Diverse Reader at 3:05 PM