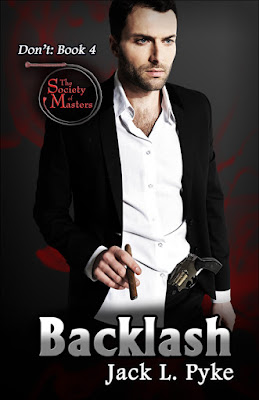 In the aftermath of Jack Harrison’s release from the psychiatric unit, Gray Raoul’s first instinct is to take brutal revenge on the one responsible for financing Jack and Jan’s torturous psychological reconditioning. However, that person plays the game dangerously well, and knows exactly how to manipulate everyone in Gray’s life. To help negotiate this delicate situation, Gray contacts ex-Diadem Doms Trace and Gabriel Hunter. But the more Gray seems to regain control, the clearer it becomes that there’s something not quite right about Jan Richards. Jan quickly unravels, taking Jack and Gray with him, and bringing out one particularly deadly player. Gray is left with one last defense: break Jack down in order to partner up with his alter ego, Martin. But once freed, Martin has plans of his own, and he wants to make it personal with Gray. Complete trust between Master and sub, between Gray and Jack, will be tested to the absolute limit.

Jack L. Pyke Bio: Jack L. Pyke blames her dark writing influences on living close to one of England’s finest forests. Having grown up hearing a history of kidnappings, murders, strange sightings, and sexual exploits her neck of the woods is renowned for, Jack takes that into her writing, having also learned that human coping strategies for intense situations can sometimes make the best of people have disastrously bad moments. Redeeming those flaws is Jack’s drive, and if that drive just happens to lead to sexual tension between two or more guys, Jack’s the first to let nature take its course.
Connect with Jack at:
Her website: http://www.jacklpyke.com/
Facebook: https://www.facebook.com/profile.php?id=100007776739131
Goodreads: https://www.goodreads.com/author/show/6691397.Jack_L_Pyke

Giveaway
ALONG WITH THE RAFFLECOPTER, ONE PERSON WHO COMMENTS ON THIS POST WILL WIN AN EBOOK COPY OF BACKLASH!!!
a Rafflecopter giveaway