I’d like to thank Diverse Reader for the opportunity to share an exclusive excerpt of my latest release, Yesterday, which releases today from Dreamspinner. This novel is a period piece set during the tumultuous last days of the Pahlavi dynasty. The time and place aren’t conducive to romance, especially between two men, but love and logic aren’t always compatible as Kamran and Grady soon find out.  Can a chance meeting alter one’s destiny?  The answers are found within the pages of Yesterday.
The striking cover was created by multitalented author and cover artist Catt Ford. Aside from the giveaways that are listed in Rafflecopter, I bring an exclusive excerpt to whet your appetite. Enjoy! 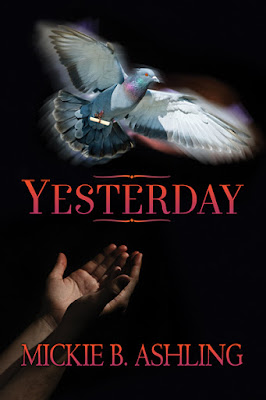 About the Book
In June of 1978 Grady Ormond, eighteen-year-old son of diplomat Peter Ormond, accompanies his father to his new posting as US Ambassador to Pakistan. Neighboring Iran is on the brink of a civil war, with the monarchy in danger of being overthrown.
Grady will be leaving for New York City in late August to study cinematography and has been warned to keep his homosexual orientation tightly under wraps while on vacation. Repercussions in the predominantly Islamic region could be severe.
On their first night in Karachi, his father hosts a cocktail party to meet the local dignitaries. Grady is introduced to His Highness Prince Kamran Izadi, nephew of the Shah of Iran. Twenty-three-year-old Kamran has recently returned from the UK, where he spent eleven years, first as a student, and then as a financial analyst.
The attraction is immediate—unforeseen and dangerously powerful—but neither one dares to make a move. Odds are so stacked against them it's futile to even entertain a friendship, but they do, and their world tilts precariously.
With his country in turmoil and Grady about to leave for college, Kamran makes a decision that will change their lives forever.

Excerpt
I threw on a pair of khaki shorts, a fresh cotton shirt, and my worn trainers. In a couple of months I’d have to start referring to my beat-up athletic shoes as sneakers, like everyone else on campus, but until then I’d carry on as normal. Adjusting would have to wait until I was back home. It was odd referring to the United States as home. My passport said I was American, but my upbringing was a hodgepodge of cultures, so it was difficult to relate to only one. In a sense it was good to be so cosmopolitan, but there were days when I wondered where I truly belonged. The only reason I was heading for New York in the fall was to get the best education possible, and when it came to cinema, the Americans were ahead of the pack.
I knew I’d be a fish out of water, though. There were certain things ingrained in my psyche that were clearly un-American, like my fondness for tea instead of coffee. I’d heard that back home it was difficult to find cafes that didn’t serve tea in any form other than a tea bag dipped into hot water. The mentality of brewing a pot from scratch was as much a part of my upbringing as hamburgers and fries were to someone raised in Idaho.
The upside to my unusual background was that I had hardly any prejudices. Color, race, and creed didn’t matter one iota, nor did sexual orientation. In my opinion, a Jew was no better or worse than a Muslim. Who one chose to deify was none of my concern, and by the same token, I resented people who tried to convince me their way was better. There was no first or best in religion. And colors of the skin were simply part of a spectrum making the world a far more interesting place. I could see beauty in the deep ebony complexion of an Ethiopian, for instance, and the almost hairless, poreless bodies of Asian men were a source of fascination. Redheads were a sensory delight, with colors ranging anywhere from deep auburn to palest strawberry blond, and I’d had, most recently, the pleasure of viewing the extraordinary men populating the Mediterranean landscape. Spanish men, in particular, were quite attractive. I loved the variety of humanity and felt sorry for anyone who put themselves in a small box with no room to enjoy the diversity.
As such, it came as no surprise that I was attracted to Kamran. Everything about him appealed to me, from the shape of his tapered fingers to the lush mane of raven-black hair spilling down his shoulders. I knew his body would be covered by a silky pelt, judging by his hairy arms. The white cotton shirt was chastely buttoned, so there was no chance to glimpse his chest hair, but I was certain it would be bountiful.
He had eyelashes far too long and curly to ignore, and his eyes, as I had noted the other night, were soft brown. They were trained on me as soon as I entered the car.
“There you are,” he said as he scanned me from head to toe. “You look cool enough.”
“It is okay that I wore shorts? I wasn’t sure what the dress code was for touring.”
“It’s fine.”
“What do you call the outfit you’re wearing? It looks very comfortable.”
“The pants are called shalwar and the top is a kameez—standard attire for this part of the world.”
“Isn’t it warmer when you’re all covered up like that?”
“On the contrary, the white reflects the sun.”
“I’ll have to invest in one of those outfits, then.”
“You can find a wide variety at the bazaar.”
“Excellent,” I replied. “I brought my camera. Will the vendors mind if I film them?”
“They shouldn’t, but it would be polite to ask before you do any filming.”
“Of course,” I said immediately. “That’s a given.”
Purchase Links
Dreamspinner Press eBook | Dreamspinner Press Paperback | All Romance eBooks | Amazon
REVIEW


I was very nervous to read this story based on the blurb. Though it takes place in 1978, so much of what I read in Yesterday still rings true, now, in 2016.

Grady, who's the son of Diplomat Peter Ormond finds himself accompanying his dad to Pakistan for the summer. His plans are to leave for NY come August. Grady, who's gay, is given ALL the warnings about keeping his homosexuality a secret while in Pakistan. Those warnings are still to be hushed even to this day. As we know from the news, homosexuality is not tolerated in an Islamic nation. The punishments are severe.

When Grady meets Prince Kamran at a cocktail party hosted by his father it's lust at first sight and I was immediately terrified for them! I read this book on the edge of my seat I was so scared the whole time.
Of course Grady and Kamran were in sync with my thinking and you can see their struggle. They feared even a friendship because of what it could lead to.

Kamran has a decision to make. I won't say what or the turnout but when I read this book I knew the impact that was being made. This book really shows the struggle of LGBT in an Islamic nation. It's utterly terrifying.

This was quite emotional for me but it was a wonderful and powerful read! I highly recommend it! 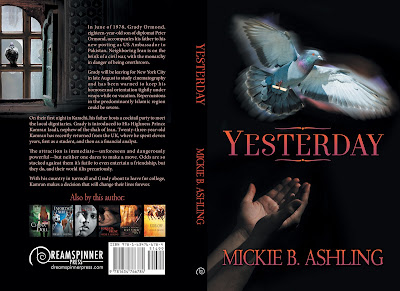 About the Author
Mickie B. Ashling is the pseudonym of a multifaceted woman who is a product of her upbringing in multiple cultures, having lived in Japan, the Philippines, Spain, and the Middle East. Fluent in three languages, she’s a citizen of the world and an interesting mixture of East and West. A little bit of this and a lot of that have brought a unique touch to her literary voice she could never learn from textbooks.
By the time Mickie discovered her talent for writing, real life got in the way, and the business of raising four sons took priority. With the advent of e-publishing—and the inevitable emptying nest—dreams of becoming a published writer were resurrected and she’s never looked back.
She stumbled into the world of men who love men in 2002 and continues to draw inspiration from their ongoing struggle to find equality and happiness in this oftentimes skewed and intolerant world. Her award-winning novels have been called "gut wrenching, daring, and thought provoking." She admits to being an angst queen and making her men work damn hard for their happy endings.
Mickie currently resides in a suburb outside Chicago.
Connect with Mickie
Email | Facebook | Twitter | Website | Blog | Goodreads & Ask the Author


Three winners will win an ebook copy of Yesterday, a signed print copy of Yesterday, or a Dreamspinner gift certificate. Contest open internationally. Must be 18 or older to enter.
a Rafflecopter giveaway
Posted by Diverse Reader at 4:44 AM