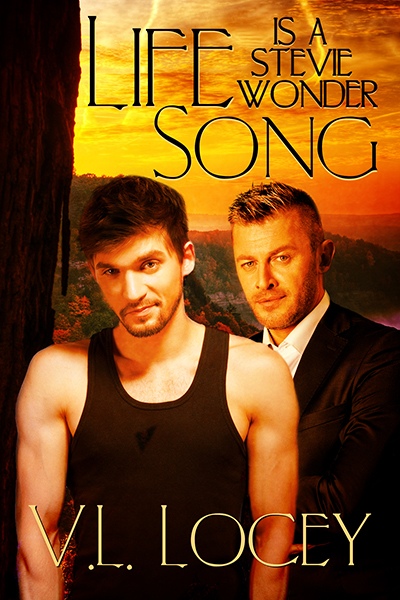 BLURB: Authors know that their muse is a fickle creature. Best-selling spy novelist Stephen Ramsey has been in a hate-hate relationship with his inspiration for months. When Stephen's publisher lays a legal ultimatum upon him, with a rapidly approaching deadline, he knows he must do something to kick-start his creativity or face the unemployment line. His daughter comes up with a possible answer: a summer camp for the creative soul. With nothing to lose, Stephen packs up his laptop, phonograph and beloved record albums and heads from Greenwich Village to the Catskill Mountains.

There, among a horde of college students attending for extra credits, is Declan Pomeroy, a photographer of fey creatures who is twenty-two years younger than Stephen. The woods are a magical place, and he quickly finds himself falling under the spell of the free-spirited photographer. Confusion wars with desire inside Stephen as he succumbs to the feelings welling up inside. But, sadly, summer camp always has to end. Can a man who has just found himself really leave the person that makes his heart sing?

Then he appeared from the tree line, a lithe, pale creature of the Finnish goddess Mielikki’s woods if ever I had seen one. Yay for that semester of world mythology back in college finally paying off. Declan wore nothing but a scrap of linen tied around his lean waist and a camera around his neck. I swallowed and stepped down off the porch, anxious to get closer to him. He waited patiently for me. As I drew closer, I could hear him humming. A smile tweaked my lips. It was Stevie Wonder’s Signed, Sealed, Delivered.

"You look like you have too much on," Declan announced when I stood in front of him. I glanced down at my attire. Gym shorts, a T-shirt, and sneakers sans socks. "How would you feel about doing this nude?" My sight knifed back from my clothes to my guide into the Twilight Zone.

"You’re not naked," I pointed out once I could speak around the knot of desire clogging my throat.

"I usually am, but I figured you’d be far too uptight to not have clothes on, so, I fashioned a makeshift chiton to cover my goodies."

"Okay. Yes, I'm not comfortable with our goodies hanging out." He glanced up at the fat moon over our heads, then sighed dramatically. "I can do no shirt and no shoes, however."

Declan’s gaze returned to me from Madame Luna. He made a sort of cooing sound then rose to his tiny toes to press his lips to mine. It was a soft peck, our mouths touching for a mere second, but it did things to my perceptions of who Steven Ramsey is that I still cannot fully explain.

"I think I'd like to see you without a shirt," he whispered over my lips.

"What are you doing?" I croaked. He shrugged a shoulder, then dropped back down to stand flat-footed. "Stop it, okay? I'm old enough to be your father."

He smiled then spun around, his bare back gleaming pure white. I wanted to touch his skin, trace the knobs of his spine with my tongue. This whole thing was pure insanity, yet I hurried to strip off my old T-shirt and kick off my sneakers. Declan glanced over his shoulder, smiled again, and then rushed off into the night, the coquette. I followed because what else could I do? Not traipsing after the kid was impossible. The grass was cool and wet under my bare soles. The high whine of a mosquito zipped past my ear. I would be nothing but a massive bug bite in the morning. I walked behind Declan, swatting at the air, hoping I didn’t step on something that would require stitches or a tetanus shot. We stepped into the woods. I debated going back for my shoes.

"We have to be as silent as possible," Declan, standing on my right, whispered.

"Shoes are quiet," I replied, my hand resting on the scraggy bark of an old pine.

"Shoes don’t allow you to touch the earth."

"They also don't allow thorns to penetrate your flesh," I parried. My guide grunted in consternation then set off once again. A million questions bounced around my head as I tenderly placed one foot down then the other. What kind of camera did he use? Was there a special ethereal film for capturing fey? Did I need therapy? Did I just step on a slug?

We walked deeper into the woods. The farther we traveled, the more I wanted to speak up or at least scoff. I was working on a good zinger when I ran into Declan’s bare back. He threw up a hand to silence me. My body tightened from a weird combination of fear and desire. The kid felt wonderful pressed against my chest, his clammy skin resting against mine. I peered over his head, my hand coming to rest on his left hip. Declan leaned back into me just the slightest bit. My cock began to swell. My eyelids drifted down as he wiggled enticingly closer still.

"Look at the hazy ring around the moon," Declan whispered. My fingers dug into his bony hip. I opened my eyes and looked up. We were on the edge of a small glen. He lifted up his camera and snapped several images as I stared at the milky white fingers of magic tickling the moon. "Now look at the ground." I did. There, in the center of the small glen, was a small, perfectly circular ring of mushrooms perhaps ten feet wide. "That's known as a fairy ring."

"Huh," I grunted, my body trying desperately to take over the show. Declan had to feel my erection resting against his pert ass. He seemed perfectly as ease with a hard dick between his buttocks. I, on the other hand, was slowly going mad. I longed to lower my mouth to his neck and lick the sweat from his skin. I also wanted to run away screaming to the world that I was not a faggot, but was I? It certainly looked it. Declan lowered his camera and took a few shots of the white mushrooms.

"I've heard tales of the fey blessing those who stand in a fairy ring under a full moon. Would you like to go stand in the ring, Steven?" he asked. I nodded. He slid out of my grasp and reached back to find my hand. His fingers were thinner than mine. He pulled me into the glen. I glanced up, then back. "Are you afraid that someone will see us cuddling in the fairy ring?"

"At the moment," I stepped carefully over several large mushrooms," I'm afraid of everything, mostly you."

I came awake with a start sometime later. Voices bounced off the forest. My empty rolled off my lap to the porch. As I bent over to retrieve it, my sight landed on a pack of young adults. Four to be exact, all male—or I thought they were males. Sometimes it's hard to tell with kids today. They sounded male. Loud, brash, and rowdy, the group meandered past my bungalow. They waved and called a greeting. I lifted my bottle in reply.

One kid, a lean young man with dark brown hair, broke away from the pack. They exchanged some words then the threesome went along their way. I watched the young man approach. He had a walk that was not quite mincing but not quite fully masculine either. His shorts rode low on his slim hips. He had no shoes or shirt but he did have a bright pink bandana tied around his slender neck. As he drew closer, I could see that his features were soft, rather delicate for a man. He smiled at me as his small bare feet hit the bottom step.

"Hello, neighbor," he said as the corners of his lips curled up. He spoke softly with a subtle Southern accent, as if he were afraid of scaring something away. I actually glanced around to see if a deer had stepped out of the darkening woods. "Is that Elton John?" he asked, his head tipping left, then right just like a dog as Sir Elton sang inside on my phonograph. I nodded. His smile widened. "I thought so. My father loves him. Are you here as an academic advisor or something?"

"No," I replied and sat back, my gaze moving over his face. I found his cheekbones amazing. They were sharp and pronounced, as if they had been cut into his face with a laser. His eyes darted here and there. They were deep green and stood out from his dark hair well. I found myself trying to find what it was he sought, then forced myself to stop. "I'm here to write."

V.L. Locey loves worn jeans, yoga, belly laughs, reading and writing lusty tales, Greek mythology, the New York Rangers, comic books, and coffee. (Not necessarily in that order.) She shares her life with her husband, her daughter, two dogs, two cats, a flock of assorted domestic fowl, and three Jersey steers.
When not writing spicy romances, she enjoys spending her day with her menagerie in the rolling hills of Pennsylvania with a cup of fresh java in hand. She can also be found online on Facebook, Twitter, Pinterest, and GoodReads.

January 14: Elisa - My reviews and Ramblings :: Unquietly Me


January 15: Bayou Book Junkie
Posted by Diverse Reader at 5:01 AM