After walking away from Gerry, Thom is back home in Minnesota living his best life. He’s flying through the air, embracing the sexual power he reclaimed in a lonely dungeon with Gerry. Yet when Gerry arrives unannounced and full of inexplicable hope, Thom has another choice to make. Does he let Gerry go and finally close the book on their tryst? Or does Thom open up his heart to the reality of their past and the potential of their future? The third and final chapter of the There’s Always Something trilogy stays true to form: there’s always an ending.

Chapter One: Falling
Thom gave a thumbs up and fell face first to earth.

His hands gripped his parachute harness as he tipped forward. He could feel his tandem partner behind him let go of the plane, because suddenly they went from the relative safety perched on the edge of the plane, as safe as you get 12,000 feet high, to emptiness.

The surge of adrenaline was pure ecstasy. At least, that’s what Thom told himself since there was nowhere to run and nothing to fight. All he could do was enjoy the coursing flood of hormones and blood as he ripped through the sky, succumbing to gravity.

Thom did remember what his instructor told him to do fifteen minutes ago when they were still earthbound. The tall, skinny, dark-skinned man was standing in front of him, the large parachute pack in between them.

“When we’re first out of the plane, I need you to arch your back and lean your head into my chest. You’re going to want to look down, but you need to resist that urge, OK?”

“Sure,” Thom said, ridiculously aware of the overlarge blue and orange wind suit he was wearing. “But if my head’s back, how will I see anything?”

The instructor smiled and slapped Thom lightly on his shoulder. “My man, when the parachute goes out, you’ll have all the time in the world to see what you’re going to see. But for free fall it’s all about feeling, not seeing. Now when we fall, are you into spinning or would you like me to keep it stable?”

“You mean, outside the falling?” The instructor, who looked far more attractive in his red, formfitting wind suit than Thom felt in his trash bag aesthetic, laughed and nodded. “I’m here to fall out of a plane,” Thom said. “Anything else you want to do, I’m game.”

“Good man.” He picked up the heavy pack, hefting it to one shoulder. “Then let’s get hooked up.”

“Careful what you promise,” Thom said with a smirk, at ease with his newfound ability to flirt.

“Oh, I know what I said,” the instructor said over his shoulder. “And call me Tay, all right?”

Thom arched his back and pressed his head into Tay’s collarbone as they dropped. The wind roared in Thom’s ears, filling his body with a pressure he’d only ever experienced on the inside, not out.

Even though the wind was deafening, Thom could still hear Tay’s loud voice telling him they were going to spin around before popping the parachute.

Thom didn’t have a chance to reply before Tay took them on a dance through the light-blue sky. Thom’s stomach did lurch, but that was the only moment of hesitation, and after it passed, there was a nothing but lightheaded giddiness. Thom flew past everything on the ground, however momentarily, and he rejoiced.

Tay tapped him on the shoulder. Thom struggled but finally saw Tay was trying to show him the red altimeter. The needle was dropping fast, steadily approaching the 2,500 feet mark, which was where Tay had said again and again they’d open up the parachute. Thom nodded as best he could, quickly trying to prepare for the sudden rush to be over.

He didn’t want it to end. Not after the summer he’d had—the strange amazingness and awfulness of Gerry. Thom wanted to be stuck in the clouds, falling and flying with nothing waiting for him and nothing to run from. It was a ridiculous wish, but it’s what he wanted. And Thom was trying to be OK with accepting what he wanted. Wanting Gerry. Not wanting him. Walking away. Forgetting Gerry.

Struggling to forget. If he’d been successful, Thom doubted he would’ve been hurtling through an almost empty sky right now, strapped in with a stranger. A handsome stranger with a beautiful smile but still a stranger.

Thom squeezed his shoulder harness hard, anticipating the sudden pull of his parachute. But he wasn’t ready for the jarring stop. His head snapped forward, wanting, Thom was sure, to fall off and continue the headlong drop toward earth. But his head stayed attached, and he remained tethered to Tay.

The parachute unfolded above them with a massive sound, like a giant shaking out the wrinkles of a flat sheet before making a bed. Once the chute opened, Thom’s free fall shifted effervescently out of control to a moderate forty miles per hour rush back to earth.

The wind still raged, but the inevitability of catastrophe was gone, and with it went Thom’s giddy peace. All of a sudden, the same problems and turbulence Thom thought he left back on the plane came back to him. It was disappointing, though at least he had found sixty seconds of peace in the free fall.

And then Tay tapped him on his shoulder. “Smile for the camera,” he shouted.

Thom looked to his left. He’d forgotten Tay was wearing a GoPro on his left hand. It snapped Thom out of his depressive reverie. He smiled and meant it. He wasn’t going to let what was waiting for him influence his experience of this magical thing.

This floating. This flying.

Thom let out a yell as he looked out onto the flat, patchwork earth beneath him. Rivers crisscrossed roads and farms and fields filled with either cars, buildings, or animals. He could see all of it, imagining all those lives and experiences carrying on beneath him. His imagination gave Thom a titanic feeling like he had old power in the seconds that were trickling out of his hands like the sands of time.

Thom whooped again, this time Tay joining him. The adrenaline, almost threatened by the dam of worry, was still there. But so was the joy. His voice was already hoarse after the two yells, so he gave away to grinning stupidly. 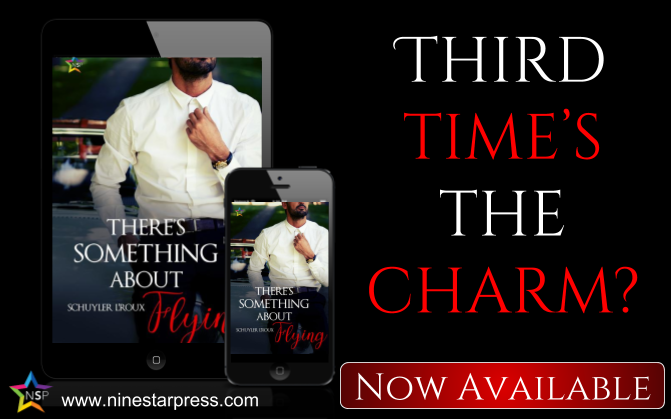 A Southern boy deeply proud of his Welsh heritage, Schuyler L’Roux is a writer who passionately believes in the power of sex—funny, world-changing, scratch-the-hell-out-of-my-back sex. He’s a new author and cannot wait to join the world of erotica with his own brand of thoughtful characters engaged in meaningful interactions and entertaining situations. With lots and lots of sex, of course. When he’s not traveling, Schuyler currently calls Germany home.

Posted by Diverse Reader at 8:40 AM