All About Me and What's To Come: SJ Himes #Giveaway 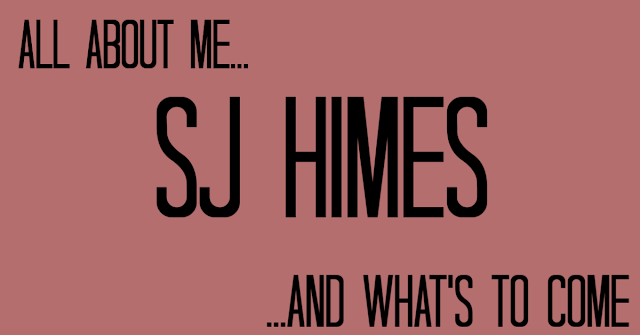 Next up in our feature spotlight: All About Me and What's To Come is the amazingly talented SJ Himes. Her books are outstanding and thrust you into worlds of great imagination. Take a look at who she is and see what's coming from her. There's a giveaway at the end so be sure to check it out!

Hello! My name is Sheena, and I write as SJ Himes and once upon a time as Revella Hawthorne. (RH is semi-retired.) I’ve written ten books to date, and I am working on another five novels. My main focus is urban fantasy and paranormal romances.

I was born and raised in Massachusetts, and most of my books are set in Boston and New England. I write LGBT+ romances, and yes, everyone is queer. Not a facet of life that I’m going to tire of anytime soon! Those of us on the Rainbow tend to gravitate to each other, for family and friends and love, and real life and fiction aren’t that far apart sometimes.

I live with my large and scary looking lap-dog Micah; my three cats: Wolf, Maximus, and Silfur; and we all hide together in the mountains of Maine. I’ve just recently moved back north after three years of living in Tampa and New Orleans, and I can say with complete honesty I will not miss the heat or the bugs. New England is HOME, in every meaning of the word, and it’s where I’m happiest. Even in the depths of winter with negative windchills!

One of my favorite places in new England is Boston, and within Boston, the neighborhood of Beacon Hill. It’s where I set my most popular series, The Beacon Hill Sorcerer, which currently has three books out and I am working on an anthology of short stories and another full-length novel in that series. BHS is urban fantasy romance with LGBT+ main characters. Angel Salvatore, a necromancer, is the main character for the first three books, and his love interest is a vampire Elder named Simeon. (Pronounced Sim-ee-ohn.) He’s Irish and has a fondness for expensive suits. The series follows their daily lives and the trouble that Angel finds himself in with alarming regularity. He goes looking for trouble as often as it finds him, but no worries, my necromancer packs a punch. He’s got plenty of back up if he ever needs it, from his apprentice Daniel, to his brother Isaac with a fiery temper, and a dragon the size of a house cat who happens to really dislike pigeons.

I am currently working on an anthology for BHS of short stories featuring current characters, it should be out in the next month or so. 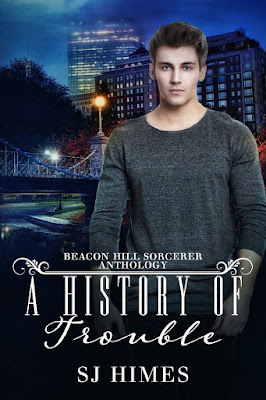 Blurb: A collection of short stories from The Beacon Hill Sorcerer series by SJ Himes.

Red Wine and Blood
The Blood Wars raged for centuries across Boston. Witness a brief glimpse into the brutal history of the Wars with Ignacio Salvatore and the vampire he loves, Ashwin Metcalfe, in 1897.

Patriot's Day
Daniel is helping the newly-resurrected fae Ruairi Brennan become accustomed to modern-day living. A boring trip to the bank quickly escalates, and Daniel calls Angel for help. The day goes downhill from there but ends in a trip down memory lane for a fae who has seen hundreds of battles, and a necromancer who barely survived Boston's Blood Wars.

A Dragon in the City
What happens when Eroch goes adventuring in Beacon Hill without Angel? Chaos, pure chaos.

A History of Trouble
Angel was joking when he asked O'Malley if someone resurrected a mammoth. Little did he know that was exactly what someone did. Experience the untold story of what happened that unfortunate night at the Boston Public Museum.
(For full enjoyment, the Beacon Hill Sorcerer Series Books 1 through 3 should be read before reading this anthology.)

Goodreads: A History of Trouble 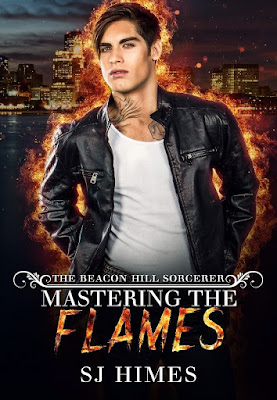 Guilt-ridden after the massacre of his family, Isaac Salvatore turned to binge drinking to escape the pain. Now twenty-four years old, Isaac is a recovering alcoholic woefully out of practice in the magical arts, leaving his fire affinity hanging on the edge of disaster. After a month of rehab, he returns to Beacon Hill and his family, determined to remain sober and fulfill his potential as one of the last Salvatore sorcerers.
Constantine Batiste is the oldest, most powerful vampire in the city. Born in ancient Gaul, the bastard son of a tribal king, his long life has been shrouded in tragedy and horrors. Recent mistakes have left him wary and determined to guard his clan from all foes. When two of his clan members fall victim to an ancient evil, he summons the Necromancer of Boston. Accompanying his older brother to the Tower is the handsome young fire mage once injured by Constantine's arrogance, and their encounter reignites an attraction that burns within both Constantine and Isaac.
The answer to who is targeting practitioners is buried in the dark, early days of Constantine's immortal life. Isaac finds himself saddled with an inconvenient insight into the evil cutting a swath through the supernatural population of Boston. Isaac is determined to keep both his family and the undead man capable of withstanding his flames safe from a danger he understands all too well.


One signed paperback of any of my published backlist books, open to all, international included. (Will be mailed out after first week of February.)


a Rafflecopter giveaway
Posted by Diverse Reader at 7:21 AM