When Dora receives a letter from the immigration service in Canada saying she will be deported soon, as her visa is expiring, a friend suggests she marry a woman. Since she doesn’t currently have a girlfriend, faking a relationship might be her only option since she can’t muster the desire to return to school for advanced photograph studies.

Abby is a reserved librarian who seems enthusiastic about helping with the marriage plan. As the two girls get to know each other through dates in snowy Toronto and meeting Abby’s family for Christmas, Dora starts to wonder how much of this relationship they are faking and how much is real.

Chapter One
My hands shook around the letter, the words blurring before my eyes. This couldn’t be happening. Not to me. Almost two years living in Toronto, without any complications, and now I received notice I was going to be deported. Thrown out of the place I was learning to love as my own. And honestly? I was to blame for missing the expiration date on my student visa.

Now, I had to race against time to legalize my immigrant status, or I’d have to go back to Brazil. To a home I barely thought about anymore.

I sat on the couch, letting the letter fall to my lap. I was screwed. Completely screwed.

My roommate, Julie, came out of her room, stopping in her tracks to give me a curious glance. “Geez, you look like someone died,” she said. “Don’t you have to go to work?”

When I didn’t say anything, Julie gave up and walked to the kitchen. I heard mugs being moved around and cupboards opening and closing. A few seconds later, she came back, a small frown creasing her forehead.

Julie was a cute tomcat bisexual girl who was into indie movies, the ones with barely any dialogue, where one watched people live through a vintage faded screen. Some of them were actually nice, if one was in the right mood to understand its meaning behind the many layers of subtext.

Technically, the apartment we shared belonged to her. She was the rich kid of a famous Canadian producer, and her mother was a well-known director in the Toronto film community, so her family paid for most of her expenses. Or, well, now our living conditions. I couldn’t really complain since I had a bedroom to myself, a cozy living room, and a kitchen large enough for more than two people to move around comfortably.

What more could a girl like me ask for in life?

“Okay, please tell me no one actually died,” Julie said, her bangs falling in front of her dark eyes.

I shook my head, finally coming back to myself and jumped from the couch. “I need to go to work.”

“Well, you can still get there in time.” And then Julie was back to her morning coffee rituals.

I had a life to take care of. This situation wasn’t going to fix itself if I sat around, missed work, and stared at this letter all day. I moved quickly, shoved the letter into my backpack before grabbing my keys and my bike helmet.

“Have a good day!” Julie said from the kitchen as I opened the door. “And be careful with the traffic.”

I rolled my eyes at her worry. Julie had been struck by a car last year when she was biking around the city, and now she believed bicycles were monsters from hell, instead of realizing drivers can be the real assholes. She even tried to get rid of my red beauty, but I obviously didn’t let her touch my baby.

“Don’t worry! You have a good day too,” I said as I closed the door behind me.

Racing down the stairs, I almost tripped over someone. I took a step back, cursing to myself when I caught a glimpse of dark blonde hair. It was our neighbor from downstairs, Carol.

She played with her hair in a flirtatious way, leaning closer. I tried to get past her, but she was quicker and trapped me against the wall.

So maybe I had slept with our super-hot neighbor when I had just moved in and desperately needed to get laid. I still regretted the decision. Not that the sex was bad, but Carol didn’t seem to get the message that casual sex with her wasn’t something I was going to make a habit of.

I pushed past her to gain a little breathing space. “You know how it is. Super busy with work and life.”

Carol’s mouth formed a little pout. “If you ever have free time, you know where to find me. I’m right under you.” She winked at me and waved before saying, “Bye, bye,” and walked the last steps to her floor, swaying her hips suggestively.

I blinked a few times, trying to bring myself back to reality. Work. I needed to get to work. I ran the last steps, opened the garage door, grabbed my bike, and left the building. 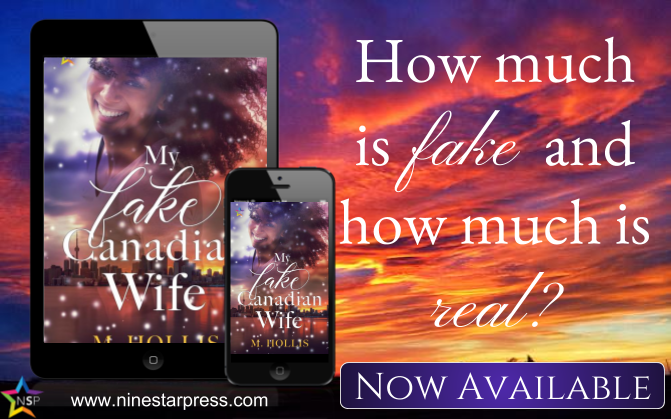 M. Hollis could never decide what to do with her life. From the time she was a child, she has changed her ideas for a career hundreds of times. After writing in hidden notebooks during classes and daydreaming during every spare moment of her day, she decided to fully dedicate herself to her stories. When she isn’t scrolling around her social media accounts or reading lots of femslash fanfiction, you’ll find her crying about female characters and baking cookies.

Posted by Diverse Reader at 9:28 AM