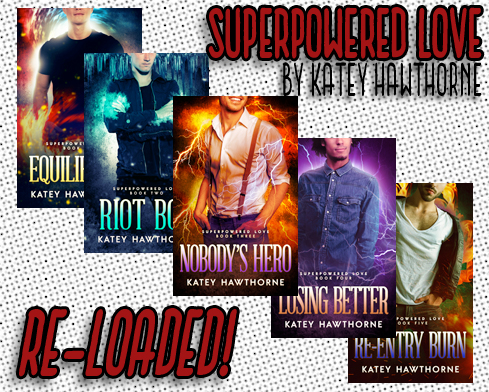 Thanks for having me here at Diverse Reader! Though I'm celebrating the release of Nobody's Hero, the third Superpowered Love book, all this blog hopping is also about the whole series. In that vein, I'm here with an excerpt from book 2, Riot Boy, that I think expresses the general spirit of the thing. Brady is in a punk band, and he's invited Etienne, our narrator, to hear him play as a kind of "first date" moment. This is what goes on after the show… 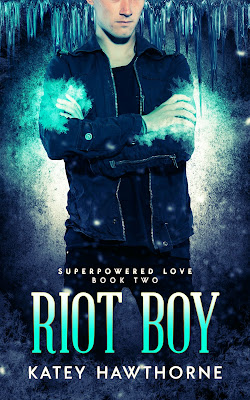 Brady went on, "Why'd you come to some dive bar to hear a possibly shitty local band?"

"Good question."
"Can I guess?" He pointed at me with his little glass. Definitely whisky, probably bourbon.
"Sure."
"Because you want to fuck me."
It wasn't so much that his shock value had worn off, just that it was true. "Well, yeah. But it's not uncommon to think of that a hundred times a day. That's nothing new. You're interesting. Apart from that."
"No one's interesting apart from that."
"You are."
He laughed and leaned back. "You're unreal, Etienne. I like saying that name—Etienne. Really, where'd it come from?"
I hit up my new beer before replying, "My mom's French."
"Speak French?" he asked.
"Like a three-year-old."
"Say something."
I ran through my stock of available phrases, most of which involved a lot of swearing. Mom had meant to teach us to speak properly, but, as with most first-generation kids, all we'd retained was the good stuff. "About what?"
"About"—his gaze flickered around until it came to rest on the abandoned stage—"music."
"What about it?"
"How I sell it for drinks." He held his up and gave it a shake for emphasis.
Nothing really came to mind except what I'd been reading the night before: Rimbaud's Une Saison en Enfer. So I said, "À qui me louer? Quelle bête faut-il adorer? Quelle sainte image attaque-t-on? Quels cœurs briserai-je? Quel mensonge dois-je tenir? Dans quel sang marcher?"
About halfway through, he closed his eyes. He kept them closed when he asked, "That's nice. What is it?" His lips remained parted after he'd spoken, and for a moment I could only stare. That face, beautiful skin, high cheekbones, like some kind of punk doll. His long, dark eyelashes, the curve of his neck, his shell pink mouth slightly open in anticipation. My earlier fantasy flooded back, bathing me in embarrassment and adrenaline. An urge to take his face in my hands, back him against the wall, and kiss him everywhere nearly overpowered me.
If he could do that to me without saying a word, then what could he do if he actually tried?
I licked my lips and forced a reply. "It's a famous Rimbaud quotation."
"I know that name." He opened his eyes. A pause and a smirk. "And no, I don't think you mean Sylvester Stallone."
"I didn't—"
He cut me off, grinning. "'Ghetto Defendant.' Clash song, off Combat Rock. Ginsberg's talking about Jean Arthur Rimbaud in it."
In my defense, the only Clash album I ever owned was London Calling—Suse never liked Combat Rock. "Oh."
"What's it mean?"
I tried to come up with the best translation, the one that felt right. "'To whom shall I hire myself out? What beast should I worship? What holy image is to be attacked? What hearts shall I break? What lie must I cling to? In what blood tread?'"
A sigh. "Fuck, that got me hard." He adjusted his package with one hand and knocked back half his drink with the other.
That had been exactly my first reaction to it, years ago. Still was, if I was thinking about it instead of reciting. Another urge to put him against the wall tore through me, this time so hard I gripped the edge of the table to keep from giving in.
I said, "Yeah. I know the feeling."
"Then what are we still sitting here for?"

Thanks again, and don't forget to enter the giveaway! <3

The Superpowered Love series (http://www.kateyhawthorne.com/p/superpowered-love.html) explores the mixed-up love lives of the “awakened”, humans with awakened thermal or electrical superpowers. 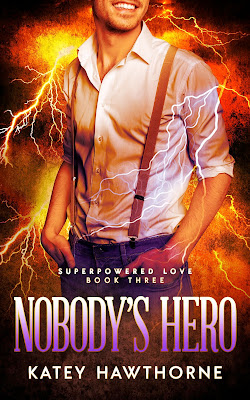 Superpowered Love 3: Nobody's Hero
Jamie Monday lives in two different worlds. With his family, he's the golden child of awakened superpowered society. He's meant to do great things and pass on his powers—with the appropriate girl, hand-picked by his mother. He's already failed at the first, so he can't bring himself to tell her the wife and children aren't happening either.

With his friends, he's the social director and life of the party. He's also an out gay man with an appetite for quick and easy lays. It's tough to have a relationship when you're hiding off-the-charts electrical powers, but Jamie doesn't mind.

Not until the prickly, paddy rocking, geeky-hot new guy at work shows him what he's been missing. Kellan's singular combination of dirty mouth and pure soul makes Jamie spark right from the beginning. But if he's going to overcome Kelly's defensive front and reach the gentle heart inside, Jamie will first have to come to terms with his own divided lives.

a Rafflecopter giveaway
Posted by Diverse Reader at 4:25 AM