Art-school dropout Chandra would do anything to apologize for her role in her wife’s coma—including enroll in the first round of human trials for an internet-access brain implant.

At first, the secretive research compound is paradise, the perfect place to distract Chandra from her grief. But as she soon learns, the facility is more prison than resort, with its doctors, support staff, and her fellow patients all bent on hatching plots of their own, no matter how invested they might seem in helping her communicate with her wife.

Making matters worse, a dark wave of uncertainty crashes down on the compound, forcing Chandra to become an unlikely but pivotal player in conspiracies stretching from the highest levels of the North American Union government to the lowest dredges of its shadowy hacking collectives.

To save herself and her wife, Chandra and her newfound friends from the study will have to overcome the scheming of a ruthless tech magnate, the naïveté of an advancement-hungry administrative assistant, and the relentless pursuits of an investigative journalist, all of whom are determined to outpace the others in their own quests to resurrect lost love, cover their tracks, and uncover the truth.

A twistedly delightful clockwork of intrigue and suspense, Imminent Dawn is an electrifying sci-fi debut from author r. r. campbell.

Chandra didn’t kill her wife, but she may as well have.

Now, as Chandra herself struggled against the darkness, against the paralysis that gripped her, she accepted no punishment was more fitting than the one that seemed to have found her on the far side of her install procedure.

“That’s what I heard,” said a man’s voice, quiet but tense. “Comas. Seizures. Electrocution. All of that.”

Chandra’s pulse blared in her ears, her throat. She tried to wiggle a finger, but it remained still.

“No way,” a different man responded. His voice thick, Chandra imagined him to be much larger than the first man who spoke. “If there were patients not waking up after the procedure—”

“Do you honestly think Halman would care?” said the first man. “Think about it. Would Wyatt Halman really put an end to this study over a couple of schmucks like you and me going brain dead after our installs?”

Brain dead. Chandra would have shivered were she able. But she couldn’t be brain dead, no—at least not in any way the doctors used the term. She could hear, understand. Her wife, for all Chandra knew, was no longer capable of even that—deaf even to Chandra’s whispers of apology.

Grief clutched Chandra as she tried to call out into the void. She managed only a gurgle.

“You hear that?” the larger man said. Bedsheets rustled against a symphony of beeping medical devices. “She’s coming to.”

Chandra’s eyes flashed open to a world of white.

She lurched forward, hands trembling. Across from her, the two men—patients like her if their lavender-colored scrubs were any indication—sat propped up on gurneys of their own. To the left, a doorway opened into a long, vacuous hall, a nurse’s station just visible at the end of it. To her right, a wall-length window opened to the colors of spring, to the pinks of blossoming cherry trees, and the brown branches of a twisted oak.

The terror that had launched Chandra forward subsided, the weight of the anesthesia claiming her once more. She settled back against her bed, the pillow now more reprieve than prison.

“Come on,” the first man said. “Leave her alone. She just woke up. Probably not thinking straight.”

Chandra forced a dry swallow, thankful she had at least survived the install procedure. With her EMPATHY nanochip now installed, all she had to do was wait for it to start working. Then Kyra could get hers, just like the ad promised all immediate family members of study participants. Only then would Chandra know whether Kyra could hear, could understand her apology through their direct internet connection. With any luck, EMPATHY might even bring Kyra completely back to her.

“That’s what I’m trying to tell you,” the smaller man said, apparently responding to some bickering Chandra missed. “The nanochip isn’t working for anyone yet. They’ve been doing these installs for months, and—”

“Wait,” the large man said. “How could you even know that?” He took the words from Chandra’s pasty mouth. “The compound has been on lock-down since the study started, and Wyatt Halman has been perfecting this technology for years.”

“Look, man,” the smaller of them said. “Believe me or don’t. That’s up to you. All I’m trying to say is even if the nurses come in here and tell us our installs were successful, that doesn’t mean EMPATHY will ever actually work for us.”

Chandra’s fingers coiled inward. If that were true, she’d given up being at her wife’s bedside every day only to get nothing but months of hopeless isolation in exchange. And to fail to return Kyra to something resembling consciousness via EMPATHY… no, Chandra couldn’t bear to think of what that might mean.

A dull throb took hold along where the surgeons made the incision near her temple. She raised her hand to massage the area, still unaccustomed to the lack of hair there—or anywhere on her head, for that matter.

“Don’t touch it,” the large man said. Chandra lowered her hand. “The nurses said so. That’s what they told us, anyway.”

Chandra managed to sit. She opened her mouth to thank him, but before she could respond, a nurse strolled into the room.

Her periwinkle scrubs matched those of every other nurse Chandra had seen since arriving on the compound yesterday. The woman looked hurried, haggard—as if she hadn’t slept in weeks. She leaned over the armrest on the side of the smaller man’s gurney and spoke in hushed, inaudible tones.

Even the most casual glance at the man’s drooping expression told Chandra everything. A failed install.

Without so much as a response from the patient, the nurse unlocked the brakes on his makeshift bed and wheeled him from the room.

The hospital equipment whimpered in three long, digital sighs before the man across the way finally spoke again. “I guess it’s just me and you now.”

The throbbing in Chandra’s temple accelerated, the pressure immense as it pressed against her left eye. Her hands gripped the railings on the side of her gurney as she collapsed back onto her sheets.

She pulled in a breath between her teeth, bracing herself against a pain so fierce she sincerely wondered if someone was taking an ice cream scoop to her brain.

“All right,” the man said. “I’m calling a nurse.” A tinny-sounding buzzer hummed as he depressed the HELP button.

A new feeling gripped Chandra. Painless now, she felt as though she were outside her own body, rising from her own chest and drifting toward the ceiling.

Her trembling ceased, though her eyes danced beneath her eyelids. When she opened them, an awareness of the tangle of bedsheets now twisted around her settled in. She unsnarled herself and brought herself upright, resting her back against her pillows, her head against the wall.

A flash of white struck in and out of her vision. The quivering returned, the hair on the back of her neck rising.

Across the way, her fellow patient had gone paler than the wall behind him. “Lady, can you talk? What’s going on? Nurse!”

Chandra, too, meant to plead for help, to relay all she felt, but the flash crashed into her vision once more—and this time, it remained. When she dared lower the shield she’d created with her arm, the softness of the lingering light surprised her. It wasn’t a light at all. It was a rectangle. No, a perfect square.

It hovered before her, fixed in the center of her vision, stirring some familiarity, the alluring awe of a daydream, a memory. And there, in the upper-left-hand corner, a thin vertical line blinked on, blinked off. Blinked on. Blinked off.

Finally a nurse stumbled into the room, his cheeks red, his chest heaving.

On the far side of the translucent sheet, the nurse scampered back into the hall, his voice echoing as he called for support.

Disbelief consumed Chandra. How to describe what hovered before her? She drafted a description to remember for later, but even her best attempt failed to do justice to the moment. She shook her head to clear her mind and typed a description of the image.

The words crawled across the sheet of white, the cursor trailing her thoughts as they gathered on the screen. And as the textscape grew, so did her excitement—as well as her concern. She paused to calm herself, and the cursor halted in its march from left-to-right.

Her chest grew light, her skin tingling. It worked. EMPATHY was actually working. She wanted to leap from bed, to tell anyone, to tell the world, to tell Kyra most of all.

But before she could speak another word, the screen vanished into a single, impossibly distant point. All the same, something told her its contents had been saved forever.

Footsteps approached from the hall, the urgent pitter-patter of a herd of help on the way.

And help was on the way, all right—help for Chandra, yes, but more importantly, help for Kyra. Once the research team confirmed EMPATHY had taken for Chandra, they’d have to give Kyra the install they’d promised.

It would only be a matter of months, maybe even weeks before Chandra could apologize to her wife, could tell her she loved her again. They’d be back to squabbling over what to plant where in their garden, to bristling at bedtime ghost stories—even if Kyra’s coma only allowed her to do so over EMPATHY.

Then a memory of the rumors returned, the smaller man’s whispers of seizures and install recipients who themselves slipped into comas after their procedures. Chandra’s stomach clenched at the thought.

She supposed the man had also said that after months of install procedures EMPATHY still hadn’t taken for anyone, and Chandra had already disproven that rumor. Perhaps she was the exception. At least she hoped she was.

Her fate and that of her wife depended on it. 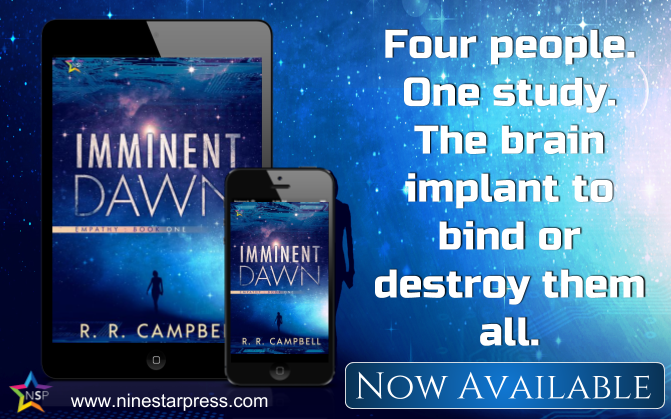 Posted by Diverse Reader at 9:03 AM