Larry’s search for love didn’t include Greg, his regular waiter at his favorite restaurant. Always too busy daydreaming about a handsome doctor, Larry fails to notice Greg’s shy advances. But when Greg finally finds the courage to ask Larry out, he’s suddenly killed in a freak car accident. Only then does Larry realize how perfect they could have been together.

No one gets a second shot at true love. Or do they?

Inexplicably, Larry is drawn into a parallel reality, and in this new timeline, Greg is still very much alive. Here, the shy young waiter Larry knew from before has managed to live out many of his dreams. All except one: he hasn’t found love. Larry gets one more shot after all!

There are a few problems. One, Larry’s time is limited. Two, Greg has already dated the parallel reality’s Larry, and he was a real jerk. Now Larry has to prove he’s nothing at all like his evil doppelganger and that he is willing to risk everything to protect the man he loves.

He’s found Greg again. To keep him, Larry will have to stop daydreaming and fight himself—literally—not just metaphorically.

Chapter One
Doodling passed the time between lunch and the second half of the workday. Others met friends who they kissed on the cheeks in warm greeting. Not Larry. He sat at his table, observing and drawing the day’s events. Today, he sketched Edgar Price, the man everyone admired from afar, including Larry, whose sketchbook was littered with drawings of men he fancied. It was a collection his brother said was “not creepy at all.” But he said it with a raised eyebrow, which told Larry it was actually pretty creepy.

Not that it mattered. Edger, who was all the way across the street, would never see it. Nor would any of the others.

In the crowded bistro, Larry blended into the scenery—another beatnik with a scratchpad, another artist dreaming big, another nobody alongside all the other nobodies. He didn’t mind. Vanishing inside the hustle and bustle allowed him time to daydream.

He took a sip from his tea. The outside of the glass, wet with condensation, made him wipe his hands before he could draw again. The world around buzzed with the electric hum of downtown, punctuated by the occasional banter between coworkers.

June, a busty redhead waitress, approached him with a gap-toothed smile and leaned over his shoulder. “What you got there?”

“Nothing!” He covered his latest picture by snapping the portfolio shut. For added coverage, he grabbed one of the placemats and placed it and his elbows on top.

“Don’t look like nothin’.” June pulled the sketchbook out from under Larry’s elbows and inspected it. One of her hands rested on her hip. The other one held a coffee pot, which was dangerously tipped to the side. “Oh, he’s the hottie doctor who always eats at the cafe across the street. Did you ask him out?”

The waitress gave his shoulder a nudge. “Don’t be so shy. You’re pretty good-looking yourself. You got a nice ass. All the wait staff has noticed. Anyone who works here would say yes if you asked them out.”

Heat rushed to Larry’s face as if lava were moving beneath his skin. Well, not quite that dire, but—dammit—he’d let himself exaggerate.

Larry gave June a sheepish smile. “A bit. I’m not used to hearing compliments about my rump. Or, uh…well…”

Another waiter, whose name was Greg, walked up to the table. Normally, he sat for a chat whenever Larry came by for scones and tea. Larry enjoyed their conversations, the easy way they related.

Wearing a friendly smile, Greg peeked at Larry’s drawing. Instantly, his expression changed. The corners of his grin sagged. “Oh man, don’t get your hopes up on that one. He’s a well-known jerk. Fine as hell, don’t get me wrong, but mean as the devil. He once gave me a one-cent tip because the water he ordered wasn’t the proper dunking temperature.”

June asked, “What does that even mean?”

Larry didn’t know either. Impulsively, he turned to Greg and asked, “Do you think he’d even talk to someone like me?”

Greg’s mouth hung open. “Uh” was all he could say.

Larry worried he crossed some type of boundary. He enjoyed this bistro and didn’t want to get kicked out for being a weird perv with a sketchbook filled with salacious drawings. No other place in town had scones that melted in his mouth or an endless stream of tea, no matter the time of day. Also, none of them had Greg. Who would he talk to about his day?

June coughed and nudged the waiter. “Hon, is there something you want to say to Larry here? Something related to the subject of crushes?”

Putting on an easy smile, Greg shrugged again and said, “Never hurts to try. He’d be nicer to you than he was to me since you’re so…”

“Hot.” June finished for him when his voice trailed off.

Greg shifted from one foot to the other. “I was going to say pleasant. I mean, you tip really well.”

June tilted her head back and rolled her eyes. “Jesus wept.”

The odd back-and-forth confused Larry. His eyes darted from one face to the next.

He had an odd thought. Greg wanted something more from him than a tip. Or, as the kids often said, maybe he wanted the tip but also so much more. Thinking about it made Larry out of sorts with his own body, which twitched uncontrollably. He knocked over a glass. The tea washed over the table in a wave, cascading over the edge like a waterfall. Larry hopped from his seat before it could spill over to his pants.

Brightly, June said, “No worries at all! I’ll get a rag!”

Left alone, Greg and Larry considered the situation from opposite ends of the table. Neither of them said anything, but they checked each other out. Although he wasn’t vain about it, Larry thought of himself as an attractive man. He was tall and well-muscled. His wavy brown hair fell over his eyes in a boyish swirl. In high school, his nickname had been Kent. No one had ever called him Superman, though.

Trying to grin in a charming manner, Larry said, “Is June right? Is there something you want to tell me?”

Greg’s eyes darted left, then right. “Uh,” he said and tapped his fingers against his apron. “Well…well…yes.”

“Next week we have a soup special. Clam chowder. Your favorite.”

That deflated Larry’s hopes. “Oh. Thanks.”

Greg spun on his heel and sped off. His arms practically pumped in his haste to get away. Larry continued to fret he’d somehow offended the man.

When June came back, she twisted her head, looking for the other waiter. “Where did he run off to?”

Larry tried to be nonchalant, but he could feel the frown lines on his face. “To get soup. Maybe?”

She tossed her hands up. “Jesus wept!”

Larry agreed. He paid his bill, slapping down a handsome tip for the trouble of cleaning up after him. Pulling his collar up over his ears, he prepared himself for a blast of autumn wind. The windy city of Chicago didn’t disappoint. Once outside, he was immediately under attack.

Always busy, the cars on the streets around him whooshed by. Flyers and other litter fluttered beneath the tires, swirling up in the air. A light drizzle fell. Eventually, those crisp sheets of paper would become mush.

He turned around in time to see Greg running across the street to catch up to him. He held a white piece of paper over his head and waved it back and forth like a flag of surrender.

A grin, large enough to make the sides of his face hurt, cut across Larry’s face. He didn’t understand why he was smiling, but a sudden burst of joy was welcome after weeks of getting by on okay.

“Hey,” he called to Greg. “Did I forget to pay the bill or something?”

Larry stopped. The smile hadn’t left his face. If anything, it stretched wider the closer Greg got. Any moment, their hands would touch. Anticipating the connection, Larry’s hand sweated. He wiped it against his trousers and tried to slow the rapid beat of his heart.

Larry cut off his question. Out of nowhere, a car turned right, hurtling directly toward Greg. The warning didn’t reach him in time. The Honda plowed into him, and he rolled up over its hood, breaking the glass before tumbling down the other side. Screams soured the pleasant air. Tires screeched; the heat from them made the air heavy with the smell of tar before it was overtaken with the smell of pennies.

A white piece of paper, now tinged with blotches of red, rested near Greg’s hand. On it, he had scribbled his number. 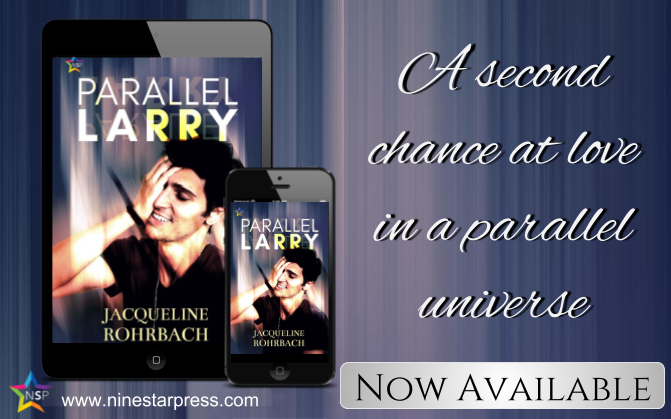 Jacqueline Rohrbach is a 36-year-old creative writer living in windy central Washington. When she isn’t writing strange books about bloodsucking magical werewolves, she’s baking sweets, or walking her two dogs, Nibbler and Mulder. She also loves cheesy ghost shows, especially when the hosts call out the ghost out like he wants to brawl with it in a bar. You know, “Come out here, you coward! You like to haunt little kids. Haunt me!” Jackee laughs at this EVERY time. She’s also a hopeless World of Warcraft addict. In her heyday, she was a top parsing disc priest. She became a paladin to fight Deathwing, she went back to a priest to cuddle pandas, and then she went to a shaman because I guess she thought it would be fun to spend an entire expansion underpowered and frustrated. Boomchicken for Legion! Follow Jacqueline on Twitter.

Posted by Diverse Reader at 9:30 AM