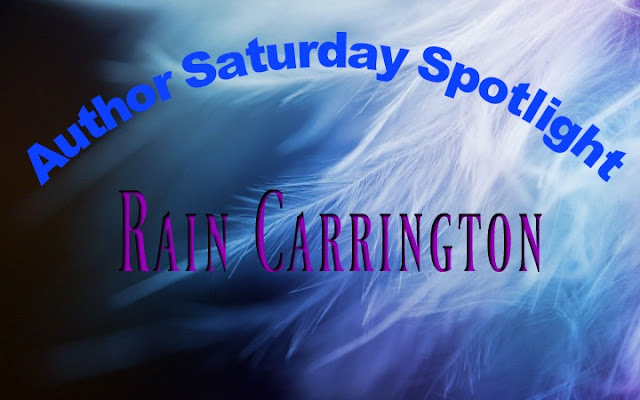 It's that wonderful time of week where I force an author into answering my questions and make them give away things! Nah, I'm kidding. They come willingily.... I SWEAR!

Today we have the lovely Rain Carrington. She's been writing books for this genre for awhile and has written some sexy and some beautiful. We have an interview, we will look at some of her work, and we have a giveaway. So, stick around. 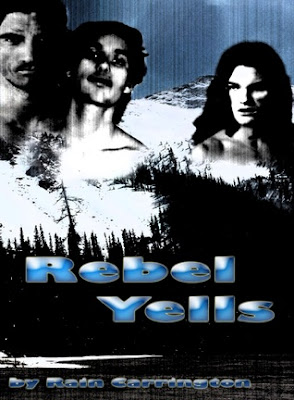 Jack Colton dedicated his life to two things, the law and the love of a good man named Martin. When Martin dies Jack goes into mourning so deeply that he starts to see his late husband everywhere. Martin tells Jack that he needs to move on and find another love but Jack is holding on too hard to his love and his job to see love when it speeds through the small sleepy town he watches over.

Rebel Marino lives up to his name. He fights hard not only with his fists but to keep from letting anyone get close. Rebel inherits a home and business from his favorite aunt, whom he sees even though she recently passed away. She tries to convince him that the tall handsome sheriff is worth a leap of faith. 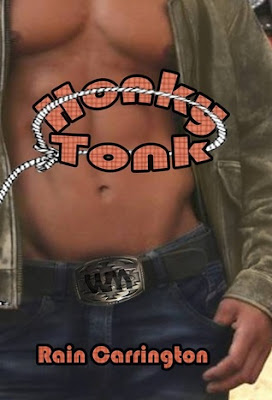 Meet Ethan...he's a self proclaimed slut hitchhiking across country from New York on his way to San Francisco. He stops in a small town in New Mexico and gets a job at a tavern called Honky Tonk without really wanting it. The owner of the tavern is a hulking man named Hunter Westmore and Ethan does everything he can to get the man's attention and once he does his dirtiest dreams come true.


Hunter is a cowboy and owns a ranch as well as the tavern. When he meets the city kid who came into the tavern he didn't know what hit him. He'd never felt the way Ethan made him feel and he tried to ignore the younger man but no one could ignore Ethan. Once he finally gives in they start a discovery of what makes them both tick, and what they both love is when Hunter takes a strong hand to Ethan and gives him his collar. Can their darkly seductive love last or will their kinks tear them apart? 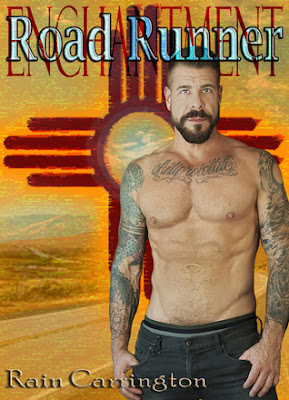 In the Land of Enchantment, New Mexico, lives a man who has secrets. Levi Kape watches people at a bar nightly, writing things in his notebook and trying to blend in with the locals. His secrets keep him from getting close to anyone until Bobby Dawes comes off the road after a long haul in his 18-wheeler. After getting to know Bobby, he realizes he’d never been close to anyone. That was about to change.
Levi can’t settle down and not because he doesn’t want to, but because it could endanger his life. Bobby is a gentle, loving and strong man who doesn’t do commitment. He’s also a man that Levi wants more than anything, including his own safety.
Danger causes Levi to leave but he can’t forget the truck driver that drove into his life, changing everything. When Levi leaves, Bobby goes back onto the road, trying to forget the “Golden God” he’d fallen for, but with some help from friends with connections to dark people and places, Bobby finds his man and swears never to let him go again.
Can they save each other not only from the men who want Levi dead but from years of never seeking or finding the love they found in one another? Will the ultimate betrayal cost them the trust they need to make it work between them? Can Bobby save him, or be lost in a dark world alone… 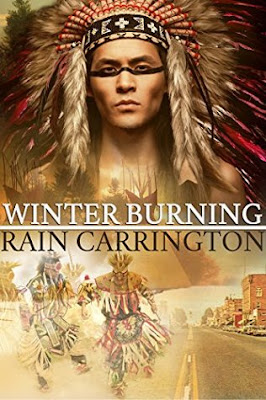 James Snow Bringer is an impressionable young Native American man living on the Montana sheep farm his family has owned for decades. His life on the reservation bores him to death and James yearns to see more of the world. During a trip into town, he meets a bus load of hippies, headed to a commune. When he goes to stay with them, he gets a taste of a different world which only wets his appetite to learn more.

Wyman Crow has faced hate many times and serving his country in Vietnam, and losing his lover there, only makes things worse. He returns home with the deep-seated knowledge that he will always be hated for his skin color wherever he is. It takes some time, but Wyman learns to accept himself and vows to become the warrior his ancestors were, the only way he can. He tells their stories. Wyman will not lie down and let bigots win, determined to fight for equality in a world that doesn’t want him.

A chance meeting at a pow-wow brings James and Wyman together where they quickly succumb to mutual attraction. Wyman falls in love with the innocent young man but when James persists in asking questions about who their people are, Wyman decides to do more than tell him. He shows him. When they embark on a journey of discovery together, James is eager to learn. He’s not prepared for what he finds.

Winter Burning – An epic tale of painful truth, hatred, and most important of all, deep and abiding love.

Thank you, Rain, for being here today and letting me pick your brain a bit. I just have a few questions and then I shall release you.

No problem! After moving across the country (Again!!) being in front of my computer is a JOY!

Describe for us what it feels like when you complete a book?

Relief, anxiety, happiness, EXHAUSTION! Lol, it’s the best feeling in the world for about three minutes, and then I begin to second guess every word. That gets better, but as writers there are few of us that are completely satisfied with our completed work. After my readers tell me how stupid I was to worry, though, it gets better all over again!

What series of yours would you love to see made into a cable show?

It would of course have to be on Showtime or HBO with the content! LOL! I would love to see any of them, but I guess my favorite, always would be Apishipa Creek Chronicles. The friendships evolved, the family feeling on the side of all the sexy stuff inspired me to make Denver Diaries.

What is the easiest and hardest part about publishing a book?

Finishing, first and foremost. Then going through it fifty times, changing and getting things to fit, and then getting it on some of the publishing sites. Amazon is pretty easy, which is why I default to only publishing there.

Winter Burning was an incredibly emotional and spiritual book. For me anyway. What research did you have to do for this?

A ton! I spent more time on research for Winter Burning than I have on any other book. Some of it I loved, like the different traditions of tribes, etc, and others, like when was Interstate 70 built and what route would the men take going from Utah to Nebraska. That was like a couple pages of the book, and yet I had to read about it for hours! And when twist caps became common for beer. I got so tired of that, I made them drink an import! I love research, but then again, I’m usually researching leather daddies and ways of fun torture!

I am currently working on the second to last Denver Diaries. I have some characters and story lines to finish up and I’ve finally figured out the way to do at least two of the characters up nicely!

Rain Carrington on both FB and Twitter, and I took my website down to redo it. It was on my last nerve! LOL.

What are some of your favorite childhood books that have stayed with you through the years?

Childhood started with Trixie Beldon. Mystery and fun, and then quickly headed to anything by Stephen King, John Saul and Dean Kootnz. I’ve expanded after, but I still love my King.

Thank you so much, Rain.

Thank you, Meredith! I’ve enjoyed this!

Enter the giveaway to win the ebook WInter Burning and
a $5.00 Amazon gift card.
Contest will end on August 18th
Thank you!