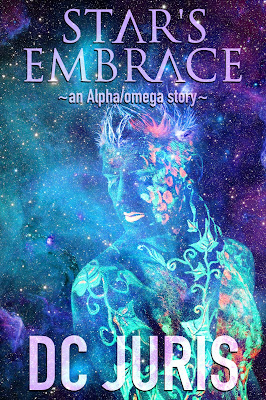 Maltinian Ambassador Jedryn Parvone is forbidden fruit to a simple Human ship Captain like Jacob Meryl. But when a mission puts them in close quarters once again, will Jacob continue to bury his feelings? Not if Jedryn has anything to say about it.

Jacob answered the door buzzer a little under three hours later—he'd had just enough time to shower and look presentable. Clad in a floor-length, shimmering red robe that clung to his hips unmercifully, his long, thick hair done up into a bun with a colorful feather sticking out, Jedryn walked toward him with the graceful ease only a Maltinian possessed. Jedryn's face lit up in a wide, sweet smile, and Jacob felt his guts tremble in response. Jedryn brushed his lips gently across his cheek. "I have missed you," he whispered. Jacobs's stomach did flip-flops. Jedryn was forbidden fruit of the highest order. The man's father had never warmed to Jacob; probably never would. For Jedryn to mate without his father's consent would mark Jedryn as a c'entrath. A nasty slur among Maltinians, the closest Human equivalent was something slightly worse than whore. He brushed his sweaty palms on his pants for the hundredth time, and took a deep breath. He had never been anxious around anyone, but something about Jedryn rattled his nerves. Aside from being the most physically beautiful man he had ever encountered, Jedryn was also the kindest, the purest of heart. He doubted the alien carried a mean bone in his body. Far too good for the likes of him. "Is there anything to eat?" Jedryn asked, stepping back. "I am famished." Jacob nodded, at last taking in the pallor of his skin and the dark almost purple, circles under his bright blue, almond-shaped eyes. He took Jedryn's hand and led him to the small kitchen area, gestured for him to sit at the table. They would have to discuss the mission, but for a while maybe he could keep the topics to more mundane things. "How's your sire?" "You do not need to avoid the subject of the slaves." "I'm not avoiding anything. I'm being polite." Jacob shrugged. "I hear he's making progress with the Disputed Space talks." Jedryn groaned. "If there exists a more stubborn race than the Bortors, I have never heard of them. Do you know their delegate fought my sire at every turn?" "Perhaps she doesn't want peace." Jacob poured a glass of amara juice and slid it across the table. He turned and fished out a bowl from the cupboard. "Salad or stew?" Jedryn downed several sips of juice. "Salad, please. I think she does want peace," he said, getting back to the conversation. "She is just…stubborn." Jedryn folded his arms on top of the table and rested his chin on them. "How have you been?" "I've kept busy." He tossed a few leafy greens into the bowl—Jedryn didn't like anything else in his salad—dribbled some flavored oil over them, and handed off the bowl. He joined Jedryn at the table with a sigh. Jedryn sat up and picked at the food, frowning, his forehead knit together. "This is lovely, Jacob. Thank you." Jacob blinked several times, taken aback, as always, by the sincerity and warmth in Jedryn's expression and tone. Two things the universe no longer had enough of. He recovered quickly, somehow remembering to breathe. "Anyone can make a salad." "Still, it is nice. I so rarely get to eat Human food, and I do prefer it so much to the bland cuisine of my home world." "Perhaps when I retire I should start a cooking school on your planet, eh?" Jedryn laughed, a musical sound that sent shivers up and down Jacob's spine. "You would either do extremely well or extremely poorly." And for a moment, just a tiny, shivering moment, Jacob let himself imagine it. Perhaps he would share a cozy little home with Jedryn on Maltinia. He pictured it, standing at the door of their house, gazing out at the fields and mountains beyond, at the stationary clouds—big and fluffy in that picturesque way that defied reality, as if he had stepped into a painting. Shadows of those same clouds would cover half the mountains, the trees below them cast in a hue of deep green. They'd have the sort of life poets wrote about, minstrels sang of, and artists loved to capture on canvas. The sort of life that could make a man believe in the perfection of his world—a world with only beauty and peace. The sort of life that could make a man feel as though he truly belonged—not just to any one thing—but to everything: the trees, the water, the air, the soil. The sort of life that could make a man feel complete and want for nothing. Any man except him, that was. He slid his gaze to the window, to the stars beyond, longing to be out among them. He missed the familiar quirks of his ship, the camaraderie of his crew, and the adrenaline-pumping excitement of their escapades. The domesticity of vacation didn't sit well with him, but after their last mission—after he'd narrowly escaped capture by the Koralens and managed barely to save his ship and crew— he'd felt they'd all been owed a little time off. Jedryn finished the last few bites of his salad, then gave a shy smile and lowered his gaze to the table. "When I was here last, they had made great advancements with the hydroponics. Do you think there is anything new to show me this time?" He could show Jedryn something, all right. "As a matter of fact, I know there is. Come." He stood and offered his hand. 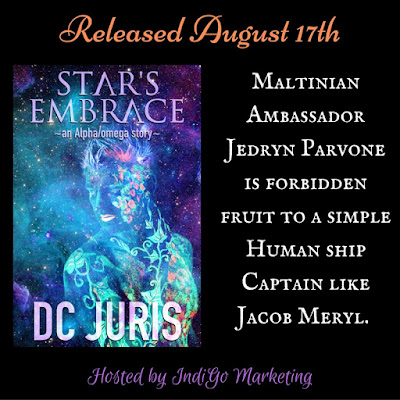 Meet the Author Romance author, sci-fi fan club Captain, cosplayer, reigning Queen of Monkeyland, and random menace. Yep, we're talking about DC Juris. She’s a cupcake-making, football-watching, rubber-duck-collecting, drag-show loving, full-of-fabulous-with-a-capital-F kinda gal. She's also an ordained minister and an amateur photographer. She lives in Upstate New York with her husband, three dogs, and three cats. When she's not writing, you can find her in her favorite chair watching Star Trek and Supernatural repeats on Netflix, or surfing the web for porn. Er…research. Surfing the web for research. She may speak softly but she lives and loves loudly. Just ask the neighbors. ::wink::