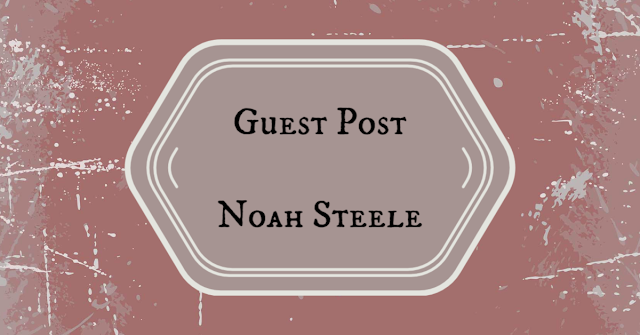 Diverse Reader is so excited to have the fabulous Noah Steele here today. Aside from his talent he's absolutely one of the kindest people I've ever spoken with. Today you'll get to know him an bit and find out about his new release Fighting For Love. So, get comfy.

Hey everyone! I’m Noah, and I’m kind of a new guy in town. My first book, Racing into Love, came out in January 2019, and the second in the series, Fighting for Love, is brand new this week on Amazon and KU! It’s extremely heartwarming that as a newbie, I was welcomed so readily into a beautiful community of authors, readers and reviewers. I was so worried! I fell in love with instalove before I started writing and decided pretty early that I wanted to write the kind of stuff I want to read. But what if nobody else wanted to?

Well…they did, thankfully. M/M readers are some of my favorite people because we’re all so happy to celebrate queer content, which is really important to me as an own voices gay author. I want this post to be about perspective. When I launched, I felt defensive. My guard was up, because even in a city as progressive as Toronto, my guard had to be up. Who can I get to know? Who will want to take a chance on a noob? Who will tell me my experiences that made it into the book are too unrealistic? Then my guard came down almost immediately. Why?

1.    I got to know everyone! You all have the kindest hearts.
2.    Everyone was so helpful! M/M Romance is a found family full of love and support.
3.    Respect for queer lives and experiences, fictional or otherwise, is off the charts!

I think this is why Fighting for Love is such an important book for me. It’s me with my guard down. Me getting to be more real and raw and intense with everyone. It wasn’t hard to write, but it was hard to finish. The second book has pressure attached! That’s not all, though.

Beyond that, this second step into the world of writing M/M romance was another opportunity to create more of a world I fell in love with. A world without queer pain, where difficult things happen to good people because that’s just how the world is sometimes, not because of their sexuality. A world where my guys can fall hard and fast and share feelings and friendships and fuck their boyfriends and help each other figure out life and experience happy endings, because that’s what real life as a gay man is for me.

If there’s anything I want to really hit home with this post, it’s that the spirit of Fighting for Love is this:

That queer people find each other. We create found families. We can look and sound and act in different ways and all be friends, or more than friends, and share the same welcoming spaces. That emotions are strength, too. That all of us are people beyond our queerness, but powerful because of our queerness.

Thanks for being along for the ride. <3 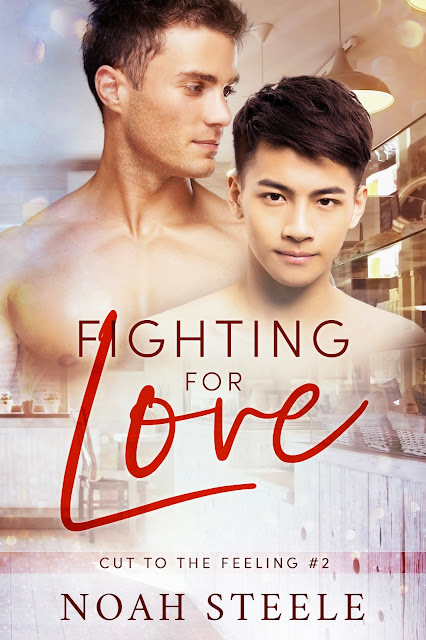 When daydreamer Oliver Park falls—literally—into the arms of a boy he’s never seen at the coffee house before, the spark of mystery muscle boy Seth Kane’s touch sends him reeling.

He hasn’t felt anything like it since he was in love with his ex-boyfriend turned best friend Aiden. When Seth asks Oliver out, the immediate heat between them is too great to ignore.

But Seth is holding back.

Are stolen moments with Oliver enough, or will Seth’s growing love risk putting a target on Oliver’s back? Someone dangerous stands in the way of the new couple’s happily ever after. Someone willing to do whatever it takes to keep Seth and Oliver apart.

Can Seth get close to Oliver without letting the sweet, soft boy get too close?

What if the truth sends Oliver running scared?

Is their whirlwind romance worth the fight?

Fighting for Love is book 2 in the Cut to the Feeling series. It is a gay instalove romantic drama that is better read as part of the series. 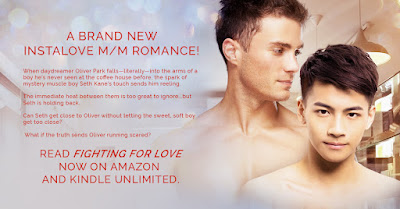 Noah Steele is an out and proud gay author based in Toronto, Canada. His debut new adult instalove gay romance series, Cut to the Feeling, is the start of a journey to share stories featuring queer characters getting the happy endings they deserve. He believes that queerness is strength, and the gay men at the heart of his books embody that strength without experiencing queerness as a roadblock to happiness. Like Noah, they're out, proud, and thriving in their whirlwind romantic adventures! When he's not writing, Noah is an avid video gamer and gym-goer.

Posted by Diverse Reader at 4:19 AM