Craig Chats: Let's Do A Recount 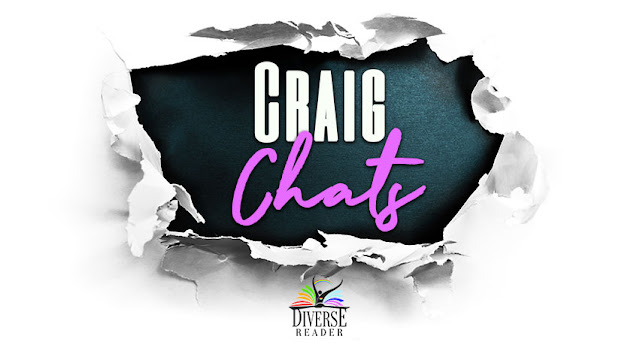 It's another Craig Chats! Which is so awesome every time! This week he's doing a good ole ramble about things going on in his life.

This Craig Chats is a little different (I feel like I say that most of the time, when in reality all of my posts are just nonsensical rambles that I desperately try to tie up by the end) in that it’s more of a general “life update” than a discussion on any pressing issues, or matters relating to the larger LGBT+ world.

A few posts ago I spoke about my relationship going open, and a few weeks ago I finally started seeking help for my anxiety. I think because I’ve been writing a biography for the last 3+ weeks (due out within the next couple of months…I hope), I’m very much in the headspace of “lets recount things, break them down, and try to make sense of my life” or something.

Anyway, welcome to this week’s post where I’m going to talk about my journey toward finding health and horniess in these pointless, fleeting moments that are life…yay!

I want to start with the hookups—because why wouldn’t I?

I’d like to think I’ve come a long way since Pete told me he wanted an open relationship and I responded with tears, fearing that we were over. If anything, I’d say I’ve acclimated to the life of a free-spirited man-whore much easier than my partner has.

Within two weeks of Pete and I agreeing to this arrangement, I had my first 80-minute visit from a well-endowed bi-sexual named Tom, who reminded me what it’s like to have those uninhibited, loud, animalistic encounters that you simply cannot maintain with a life partner. Now, that’s not to say that Pete and I don’t have good sex, but it’s pretty hard to call the guy you’ve seen pick his nose 100 times “a filthy slut” in the bedroom, then proceed to make dinner plans in your sweat-stained PJ’s that should’ve been washed two days ago… y’know?

Someone who owes you nothing, who then gives you something, is sometimes worth more than when the people who are invested in you give you those same things.

As it stands, I’ve had 4.5 hookups. I say 4.5 because one of them has kind-of turned into a friend and we didn’t finish what we started (hi if you’re reading this). My point is, it’s going well. Very well. Much more so than I imagined when this whole thing was set into motion.

My second hookup was also with Tom, which was more of the same except I wasn’t as nervous. We didn’t spend so much time exploring each other on the second round and instead jumped right to the parts we really enjoyed from our first encounter. Again, it was amazing. The guy has been blessed by the dark lord with a mighty weapon, and, oh man, does he know how to use it.

The third hookup is a little funny, I suppose. I was browsing Grindr one afternoon when a guy popped up, stating he wanted to eat my ass for dinner. And, yknow, there are people starving in some parts of the world. Who am I to deny someone their meal? Anyway, so he comes over and we go to the designated guest bedroom, and…he wasn’t joking.

I mean there were teeth involved. Lots of noise. Spit everywhere. This guy was going at my hole like I’d rubbed that KFC secret blend of 11 herbs and spices on it. But it was good. Really good. Though that did appear to be the extent of what he wanted and I was left a little…unfulfilled. I mean, it’s like the equivalent of spreading butter all over your bun and then not stuffing it with a meaty filling. Still, he was good at what he did and I thank Satan for the experience every night.

The fourth hookup happened last night. I got a message from a guy who I’ve been speaking to for a little while now whenever I have an itch I can’t scratch, and he told me he was on his way to the city and was going to be passing by my area. I asked him if he wanted to come in and smash my patty like we’re serving hamburgers at a festival, but he had a better idea—he wanted me to hop in his ride and…ride.

Now, I want to tell you all that it was a magical, no thrills (or, all thrills) experience that gave me the best orgasm of my life, but the truth is that he was too big for the condom I had on me (woe is me), the gearstick almost went places it shouldn’t (or should if you nasty), and his car couldn’t accommodate my derriere. All in all, it was a fail…but that didn’t stop me from doing my best.
So, that’s the not-so-hot-but-maybe-kinda-warm tea on my sexual situation at the moment. I don’t want to get into the psychological/mental health aspects of my open relationship as I feel I’ve discussed that in previous posts, but it’s an overall positive experience that has improved my life in many aspects. The only negatives come in the form of fears that I had way before we went open, and that leads me into our next topic…

For years I have self-diagnosed myself as having anxiety. Not only that, but I have used the terms severe and disabling when describing the severity of it to others. I always felt somewhat like a fraud for even stating I had a mental illness, having never sought out professional help for it, which was why it was such a relief when I finally went to a doctor and they got it.

Since I was around eighteen, I’ve been trying to find the words to explain my anxiety. I would be in groups of people—the most extroverted, seemingly confident people who would chime in with “I have anxiety, too” whenever I brought it up…and I’m not saying they didn’t/don’t suffer from it, but there was obviously a clear distinction between the way my anxiety manifested itself and theirs. I did look at them and wonder “how” they could have what I have. I felt like my case was on another level, and I really struggled with finding the words to describe it (yes, I’m a writer…shhh)

The guy my doctor sent me to—he got it, right away.

“Imagine if that door swung open right now. You’d feel scared, startled…nervous. You’d get an adrenaline rush, and you’d probably jump out of your seat. But once you saw it was just another doctor or nurse, you’d calm down. For you, I think that door is always swinging open. Always. That’s the state your body is in whenever you leave your house, and it’s why you feel like your anxiety is worse than when others describe theirs to you. Your body is having a severe physical reaction.”
Admittedly, that’s not word-for-word what he said because the meeting was two weeks ago now, but it’s as close to his words as I can remember. The point being, my body handles anxiety in a rather extreme fashion—fight or flight.

For me, anxiety isn’t just the mental rabbit hole of “does everyone hate me/are they laughing at me/what did they mean by that” but also the physical, shaking, sweating, tremor-inducing response that my body has. Being in fight or flight also changes the way you view the world, such as perceiving neutral/apathetic tones to be hostile. Everything is a threat.

There have been so many occasions in my life where I sense a hint of bad will directed toward me and I get defensive or outright hostile toward that person. The way I read social interactions has been off for years, and just hearing this man (I think he’s a social worker who deals with mental health therapy. I’m not entirely sure. I just know him as Dan and that my doctor said he was the best person to speak with) explain it back to me, in a way that made sense, made a difference almost immediately.
Having a professional tell you that the way you see the world has been amiss for years, and then offer a solution to the problem, was probably the best thing that ever could’ve happened to me…unless Sebastian Stan calls and wants to marry me. Still waiting on that one.

His solution? Beta blockers. And for those of you that don’t know, beta blockers are a medication designed to lower your heartrate—which, as I’ve explained, has been the main “trigger” for my anxiety. An elevated heartrate = fight or flight, which = perceiving threats everywhere = anxiety intensifies.
Now, this medication isn’t going to “fix” my anxiety. It’s not going to tackle anything going on mentally, but there’s definitely a domino effect in motion.

Not having such a strong, physical response to anxiety has eased my mind. Not perceiving the world to be out to get me has (obviously) helped me keep my cool and stopped me from mentally spiraling in social situations. I no longer shake in queues, or have my heart in my throat at bars before my order is taken—don’t get me wrong, I still overthink everything, but since my body can no longer work itself into a state, I don’t completely lose myself to those thoughts.

My mental health is a work-in-progress, I imagine it always will be, but I’m on the right track now. And if anything, I’m glad that exploring this new aspect in my relationship gets to coincide with bettering myself mentally, as I think the two go hand-in-hand quite well together.