Diverse Reader is thrilled to be a part of Rhys FOrd's Jacked Cat Jive Tour! We have PART FOUR here so be sure to check out all the blogs participating to follow it. Enjoy this wonderful post and the awesome giveaway at the end!

It is hard to believe that we are at the third book in the Kai Gracen series. Black Dog Blues was one of the first full-length novels I’d written inside of an urban fantasy genre I’ve always wanted to explore. The best part about writing Kai Gracen is creating not just the personalities but also the world they inhabit and it’s been great to blend in the fantastical with the mundane.

In his third outing, Jacked Cat Jive, Kai is faced with unique challenge of realizing he really is not as human as he thought and that the Court and its inhabitants mean something to him other than a thorn in his side. And of course, there is always Ryder, the Sidhe Lord who gets under his skin in the best of ways. I’ve enjoyed writing the push and pull of their relationship but also the growth between them as characters. They started off at very different points of view and are slowly working towards an understanding while also fending off any challenges that come at them.

This time out, Kai is not only set to rescue a group of refugees from the Badlands beneath San Dieg, he also has to come to grips with his growing friendship with Ryder and how the humans in his life are getting older, something he won’t experience himself for quite a long time.

So I hope that you join Kai and his next adventure and also enjoy this serialized story of Ryder and the trouble he gets into when he doesn’t listen to what Kai says.

Also, I invite you to enter the giveaway on each of the blogs during the tour and get a chance to win a $25 USD gift certificate from an e-tailer of your choice.

You can purchase Jacked Cat Jive at:
DSP Publications
Amazon
And other places books are sold. 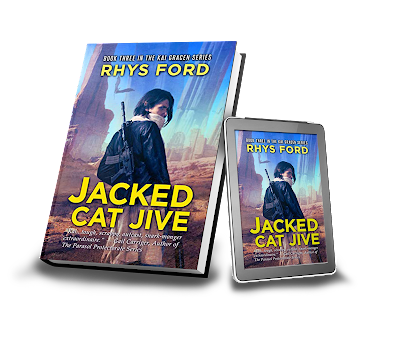 We were going back to the scene of the crime or rather the leap. I noticed this time, Kai kept us very far away from the cliffs, choosing instead to bring the car to another clearing, hopefully one safe from thundering herds of massive beasts with horns and shaggy shoulders as well as the sand-colored cats who liked to feed on them. When he first told me he was going on a run, I did everything I could to attach myself to the mission, finally bribing him with the promise of getting the final licensing for his rebuilt Mustang through the bureaucratic red tape holding up its approval to run on the roads.

There was a reason I went with him. Many reasons. Mostly, because he was always so incredibly alone. Most of his life was spent on the run, lurching from one disastrous event to the next, wrestling with his own demons while taking down monsters too fierce for anyone else to tangle with. When I first learned of his existence, there were whispers of his reputation proceeding him, a coldhearted, killing machine who took on contracts no one else would touch. I’d expected to find an Unsidhe archetype, the epitome of one of their dark warriors, someone trained to kill without any emotion but that’s not who answered the knock on his door.

He was so damned young, barely an adult but his eyes were wary, feral and fierce. I’d taken him for a disaffected Sidhe, a member of a distant Court who’d left behind his people and culture. I hadn’t known what I knew now. I couldn’t even imagine the atrocities that had gone into his creation but had I known, I still wouldn’t have been prepared for the beautiful elfin man dressed in leather and denim who opened the door for me to enter not only his home but his world.

He was far from what I imagined. I instead found a sarcastic, generous soul wrapped into a powerful, lean body and possessing a wicked, nimble mind. He had skills I couldn’t even begin to comprehend and an ability to shift midstream, forcing his will on everything and everyone around him. He’d been raised by a despicable human being, a man who I suspected took Kai in to profit off of him but Kai had an odd deep affection for the old man, one I don’t think was returned but neither one of them allowed anyone to get close to them so I didn’t know for sure.

Kai and I started off as adversaries but over time that changed. I didn’t know how he stood immune to the attraction between us, not just the genetic pull of our compatible souls but also the explosive chemistry brewing every time we were near one another. He was stronger than I was, not just physically but also emotionally, because by now I was driven half mad by the want of him whereas he could simply shrug it off as if I were nothing more than a casual acquaintance.

Sometimes it hurt to look at him because he stole my thoughts and breath. Then there were the times when I wanted to kill him because he took chances, risking his life. But that was something else I discovered about him. The heart that beat in Kai’s chest was far from cold. It burned with passion and warmth and possess a sense of justice I marveled at. He was a very good balance for my overly trained diplomacy. I just wish he saw how well he fit into my life and my Court.

“We’re looking for pygmy unicorns. Remember that.” Kai muttered. “Tiny horses. With a single horn coming out of their forehead. The University is paying us good money to verify their migration into the area. There will be no more jumping on cows, bison, antelope, alligators, or anything else on that carousel you’ve cooked up in your brain, okay? The only thing you should get into or onto is this car. And please, for Pele’s sake, remember that the fucking cats on this world can climb trees. So can bears. And if you have any questions about what an animal can do, just assume it’s going to eat your face and get into the fucking car. Got it?”

“Do you just like yelling at people? Or is it a hobby of yours?” I asked, knowing it would get a rise out of him. The bison could have been my mistake. Nova really did sound like cow and I’d primed myself to obey everything Kai told me, mostly out of self-preservation and because I still couldn’t quite trust him not to shoot me if I pissed him off. Since he was still driving, I had high hopes he couldn’t reach his gun. “And pygmy unicorns are a myth. I’ve lived a very long time and have never seen one. What makes you think they’re real?”

“I don’t care if they’re real or not. I just have to spend three days out here looking for them and since you decided to tag along, you’re going to be on watch with me.” Kai pulled the car under a stand of banyan trees, their canopies stretching out to cover nearly the entire clearing. The air was cool beneath them and we were well within sight of the watering hole a few hundreds of yards away. “This is a part of the job. Sometimes the contracts are to just sit and watch so that’s what we do. So now, do me a favor and help me set up camp. You’re lucky this is a hatchback because we’re sleeping in it. This is the kind of place we can’t put up a tent to sleep in. If you did that, you might as well put up a neon sign that says; limited time, all-you-can-eat buffet while supplies last. So get your ass in gear, lordling, and help me put up the monitoring equipment the University gave me. Then, I’m going to go find something for us to eat.” 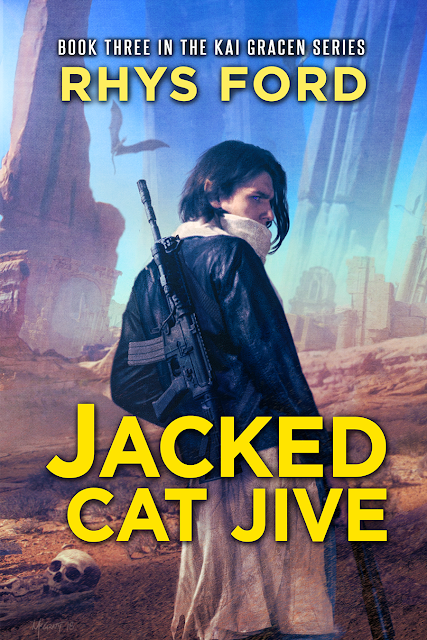 Stalker Kai Gracen knew his human upbringing would eventually clash with his elfin heritage, but not so soon. Between Ryder, a pain-in-his-neck Sidhe Lord coaxing him to join San Diego’s Southern Rise Court, and picking up bounties for SoCalGov, he has more than enough to deal with. With his loyalties divided between the humans who raised him and the Sidhe Lord he’s befriended and sworn to protect, Kai finds himself standing at a crossroads.

When a friend begs Kai to rescue a small group of elfin refugees fleeing the Dusk Court, he’s pulled into a dangerous mission with Ryder through San Diego’s understreets and the wilderness beyond. Things go from bad to downright treacherous when Kerrick, Ryder’s cousin, insists on joining them, staking a claim on Southern Rise and Kai.

Burdened by his painful past, Kai must stand with Ryder against Kerrick while facing down the very Court he fears and loathes. Dying while on a run is expected for a Stalker, but Kai wonders if embracing his elfin blood also means losing his heart, soul, and humanity along the way.
And if it’s even worth it.


Follow the rest of the Jacked Cat Jive Tour! 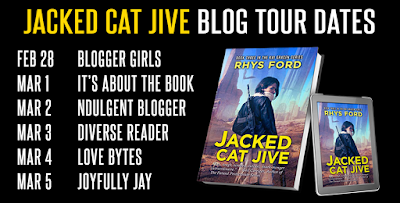 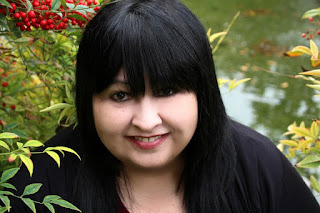 Rhys Ford is an award-winning author with several long-running LGBT+ mystery, thriller, paranormal, and urban fantasy series and is a two-time LAMBDA finalist with her Murder and Mayhem novels. She is also a 2017 Gold and Silver Medal winner in the Florida Authors and Publishers President’s Book Awards for her novels Ink and Shadows and Hanging the Stars. She is published by Dreamspinner Press and DSP Publications.
She’s also quite skeptical about bios without a dash of something personal and really, who doesn’t mention their cats, dog and cars in a bio? She shares the house with Harley, a grey tuxedo with a flower on her face, Badger, a disgruntled alley cat who isn’t sure living inside is a step up the social ladder as well as a ginger cairn terrorist named Gus. Rhys is also enslaved to the upkeep a 1979 Pontiac Firebird and enjoys murdering make-believe people.
Rhys can be found at the following locations:
Blog: www.rhysford.com
Facebook: www.facebook.com/rhys.ford.author
Twitter: @Rhys_Ford
On Your Alexa device on the Alexa Skills

$25 USD gift certificate from an e-tailer of your choice.
Contest ends March 9th
thanks