Blog Tour: All Souls Near & Nigh by Hailey Turner~ Exclusive Excerpt #Giveaway 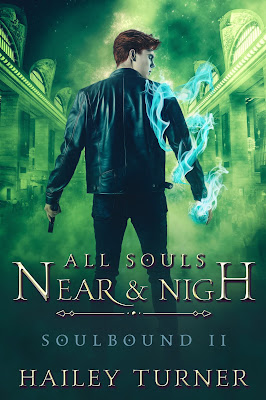 All Souls Near & Nigh by Hailey Turner

You can’t bargain with death if you’ve already sold your soul.

Special Agent Patrick Collins has been reassigned by the Supernatural Operations Agency to New York City. Learning to navigate his new relationship with Jonothon de Vere, the werewolf he’s now soulbound to, is nothing compared to dealing with territorial disputes between the vampires and werecreatures who call the five boroughs home. But the delicate treaties that have kept the preternatural world in check are fraying at the edges, and the fallout is spilling into the mundane world.

Manhattan’s club scene is overrun with the vampire drug known as shine and the subways have become a dumping ground for bodies. When the dead are revealed as missing werecreatures, Patrick and Jono find themselves entangled in pack politics twisted by vampire machinations.

Learning to trust each other comes with problems for both of them, and the gods with a stake in Patrick’s soul debt aren’t finished with him yet. Bound by promises they can’t break, Patrick and Jono must find a way to survive a threat that takes no prisoners and is stalking them relentlessly through the city streets.

Old and new betrayals are coming home to roost but the truth—buried in blood—is more poisonous than the lies being spun. Trying to outrun death is a nightmare—one Patrick may never wake up from.

All Souls Near & Nigh is a 104k word m/m urban fantasy with a gay romantic subplot and a HFN ending. It is a direct sequel to A Ferry of Bones & Gold, and reading the first book in the series would be helpful in enjoying this one. Please see the disclaimer in the Look Inside for content some readers may find triggering.


The action, mystery, and heat are kicked-up another gear in this second installment of Turner's addictive, original and immersive Soulbound series.


— Layla Reyne, author of the Agents Irish and Whiskey and Trouble Brewing series


Nobody writes like Hailey Turner. Her world building is extraordinary, as are her edgy action scenes. However, she never loses sight of her central relationship, or her razor sharp and witty characters.


This series is amazing. 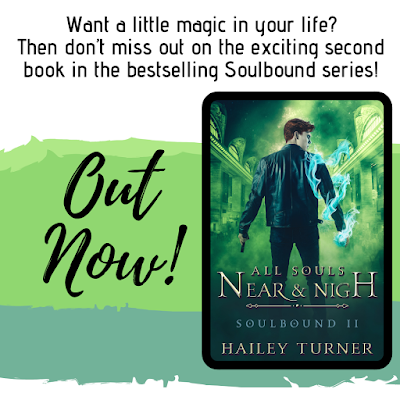 What comes first, the plot or characters?
This is like the chicken or the egg question. For me, it’s a mixture of both. I feel my characters play off the plot, but I need the outline of the book and series to really create a character and their motives. Characters and plot are pretty intertwined when I create a book, so I can’t say one comes first above the other.

Describe a typical writing day.
I usually write in the morning and evenings around work on weekdays, and for a block of hours on the weekend around errands and time spent with friends and family. On weekdays, I get up early in the morning (I’m talking 5:00am here) to get some writing in before work. I try to make time to write every day otherwise it would be difficult to finish a book if I didn’t.

How do you come up with the titles to your books?
I like to have themes with my titles and they tend to have the same sort of word structure for the entire series. For my Metahuman Files series, the titles spoke to the missions in each book. For Soulbound, every title has a hint of the mythology I’ve incorporated into that particular book. It varies with every series but I honestly can’t start a book without a title.

Youssef ended the call, and Jono pulled his mobile away from his ear with a scowl. “The god pack alphas want to see me.”
“About what?” Patrick asked.
“Andre. Seems they called the morgue and got told their services were no longer needed.”
Patrick frowned, eyes narrowing thoughtfully. “If they think they can threaten you about the case, I should be there to tell them to mind their own fucking business.”
“Doubt they’d agree to let you through the door.”
“I have a badge for a reason. Let’s go.”
While it was like pulling teeth to get Patrick to acknowledge they were a pack in a crisis and not go off on his own, he apparently had no problem remembering in order to piss off the god pack. Jono would be annoyed about that later, after they’d dealt with the current problem. At the moment, he was glad for the solidarity.
Back out the flat they went, returning to the car, the damage from unknown claw marks hidden from sight by Patrick’s magic. Jono got behind the wheel since he knew where the god pack lived and Patrick didn’t. The drive there was filled with leftover tension from their argument. Jono didn’t know how to break it before they got within hearing range of the god pack’s territory in the Upper Manhattan neighborhood of Hamilton Heights.
Jono hadn’t been back this way since after the mess in Central Park, when the god pack had demanded answers from him while Patrick was in DC, packing up his life there. Jono hadn’t been forthcoming at all at the time; neither Estelle nor Youssef had appreciated his silence.
“Looks almost like suburbia,” Patrick said as Jono drove down a street filled on either side with spacious apartment buildings or brownstones. “Do they enjoy their perfect credit scores out here?”
Jono snorted. “God packs have shit credit. Why do you think they live off tithes?”
“So no white picket fence, is what you’re saying?”
“No.”

Newsletter:  You can keep up with Hailey's future projects by joining her newsletter, where you can instantly download two free Metahuman Files short stories and the Soulbound short story Down A Twisted Path:  http://eepurl.com/cAEejL

Giveaway
Win 1 or 2 e-copies of any back catalog book by Hailey Turner!


a Rafflecopter giveaway
Posted by Diverse Reader at 4:23 AM