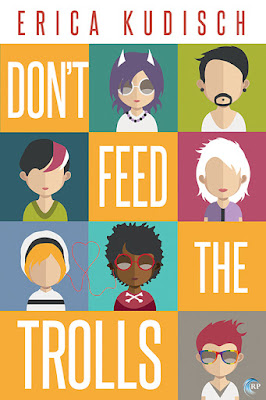 
Gaming while female is enough to incur the wrath of the dude-bros, and they’ve come for me. Instead of fighting back, I’ve created an alternate account. Male name, male pronouns. And I’ve met this girl. I’ve always liked girls, and Laura’s adorable and smart and never gives up, and she likes me back. Or rather, she likes the man I’m pretending to be. But I can’t tell her I’m a woman without the mob coming after her too.

And besides: I might not be a woman, not really.

The truth is, I don’t know what I am anymore. I’ve spent my whole life being told how I’m supposed to act and what I’m supposed to be, but none of it feels right. And my lie is starting to feel truer than anything I’ve ever been.

There’s a convention coming up, but the closer it gets, the more I have to choose: lie or fight. But if I don’t stand my ground as a girl, am I letting the haters win?

Then again, those aren’t the only two ways to live.

Erica Kudisch lives, writes, sings, and often trips over things in New York City. When not in pursuit of about five different creative vocations, none of which pay her nearly enough, you can usually find her pontificating about dead gay video games, shopping for thigh-high socks, and making her beleaguered characters wait forty thousand words before they get in the sack.

She also has issues with authority. And curses too fucking much.

Hey nerds! Erica Kudisch here promoting my novel DON'T FEED THE TROLLS, a genderqueer romp through internet drama. And if you keep up with the blog tour and its bonus DLC, there's a $50 prize package achievement for you to unlock. Have fun!

To celebrate the release of Don’t Feed the Trolls, one lucky winner will receive a $30 Riptide credit and a $20 Steam gift card! Leave a comment with your contact info to enter the contest. Entries close at midnight, Eastern time, on April 8, 2017. Contest is NOT restricted to U.S. entries. Thanks for following the tour, and don’t forget to leave your contact info!

Posted by Diverse Reader at 4:05 PM