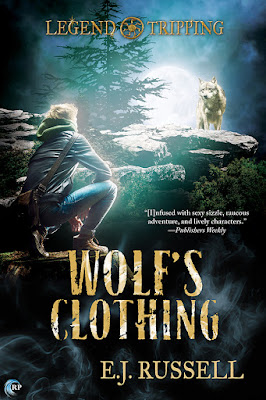 What do you do when you finally prove the existence of the otherworld, but the ghosts kick your ass?

For Trent Pielmeyer, the answer is run like hell—away from his hostile family, away from the disbelieving cops, and far, far, far away from anything that smacks of the supernatural. After seven years’ captivity in a whacked-out alternate dimension, he is so over legend tripping.

When Christophe Clavret spots Trent in a Portland bar, he detects a kindred spirit—another man attempting to outrun the darkness of his own soul. But despite their sizzling chemistry, Trent’s hatred of the uncanny makes Christophe hesitant to confide the truth: he’s a werewolf, one of a dwindling line, the victim of a genetic curse extending back to feudal Europe.

But dark forces are at work, threatening more than their growing love. If Christophe can’t win Trent’s trust, and if Trent can’t overcome his fear of the paranormal, the cost could be Trent’s freedom and Christophe’s humanity. Or it might be both their lives.

To celebrate the release of Wolf’s Clothing, one lucky winner will receive a $25 Riptide Publishing gift card! Leave a comment with your contact info to enter the contest. Entries close at midnight, Eastern time, on October 15, 2016. Contest is NOT restricted to U.S. entries. Thanks for following the tour, and don’t forget to leave your contact info!
Posted by Diverse Reader at 8:30 AM