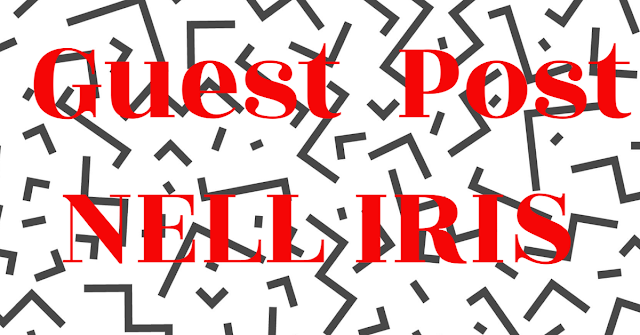 Diverse Reader is super excited to have author Nell Iris hanging out with us today talking about her new book Snowed In: Nen and Anani. Check it out and enjoy!

Five Things I Learned Writing Snowed In: Nen and Anani

Hi, everyone! I’m Nell Iris and I’m here to talk about my new book that’s being released today. But first, a warm, heart-felt thank you to Meredith and the rest of the Diverse Reader gang for hosting me. Please, everyone, support your favorite book bloggers, we authors would be nothing without them. And as a reader, book blogs are where I find most of the books I want to read.
Moving on 😊 My new book, Snowed In: Nen and Anani, is a part of JMS Books themed “snowed in” release. Several JMS authors wrote a story on the theme and the books are being released in January and February. Very fitting, considering the polar vortex and everything. It’s almost as though JMS Books knew about it back in early spring 2018 when they sent out this call for submissions to us authors, don’t you think? 😊
Snowed In: Nen and Anani is also my very first fantasy books, and I learned a lot writing it. I thought I’d talk about that today.

1.    World building. Seriously, I had no freaking clue what I’d gotten myself into when I started writing this book, there’s so much to think about when it comes to world building. And not just the big stuff, like are there dragons in my world or is the sky green? The devil is in the details as they say, and it was the little things that tripped me up. For example: the equivalent of year in Elemiis, the world where the main characters live, is rotation. Do you have any idea how instinctual it is to write year instead of rotation? Very, very instinctual, I can tell you, and I replaced a gazillion “years” during the editing process, swearing over myself for not paying close enough attention when I was writing.
2.    Swearing. When we humans swear, we use religious, sex related, or excrement words for swearing. I learned this because one of my characters did something like stubbing his toe and he would have yelled “F@*ck” if it had been a contemporary story. But since it’s a fantasy, what would he yell instead? I had no idea, and it got me all stuck, so I spent a lot of time researching swear words. It was very interesting, and I learned a lot. In the end, I decided against using any swearwords. Mostly because I got hung up on what they should be, and I needed to move forward with my writing. I didn’t want to just switch the “God” in “Oh My God” to Spirit (which is the deity in my story), so, I skipped that part, thinking I would get back to it later. But when I did, I figured it wasn’t necessary anymore, I had made it work without the cussing. And that, my dears, is a huge part of being an author: you spend a lot of time researching something that might not even end up in your book, or that’s just a miniscule part of a character’s backstory. It’s all part of the fun.
3.    Weaving is an amazing art form. One of my characters, Anani, is a tapestry weaver, so I had to do research on the topic…and was completely flabbergasted. Of course, I know weaving (like knitting, crocheting, and all the other kinds of crafts) is an art, but I hadn’t realized how amazing it was. I looked at weaving videos on Youtube (and screwed up my recommendations for weeks after) with my mouth hanging open, wanting to learn more. If you’ve got 10 minutes, I recommend this video. If you’re not impressed, I’ll be very surprised 😊 https://youtu.be/jIbu-dJuEh0
4.    I’m definitely a pantser. I thought I’d try writing an outline before I started with the story, do stuff a little differently compared to how I usually do it, and at first it felt good. But after a while, I ran into trouble. The story took a direction I hadn’t planned on, and I had to re-write the outline. And it happened again and again, until I threw out the outline, said f@*ck it, and just went with the flow. Having an outline makes me feel stuck, and it smothers my creativity. Hats off to all the plotters out there who can make it work – for me it’s impossible.
5.    I will never ever publish something without the input of a critique partner or a beta reader. Without my dear friend Addison Albright’s critical eye, this story would have been very different. She noticed things that escaped me, and when she sent it back to me, she apologized for all the comments and questions and what do you mean:s. There’s no need to apologize, Addison, this book is better because of you! 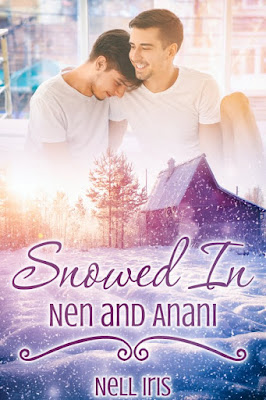 Blurb: Snowed In: Nen and Anani
”It is time to go to my son.”

Nen waited to hear those words from the Vasilissa for fifteen rotations, since that time the snow wouldn’t stop falling. But now that he’s about to meet Anani, the love of his life, again, he’s afraid. What if Anani doesn’t feel the same anymore?

Anani, the guardian of the water element, was only seventeen when he was banished from his mother’s court. Heartbroken that he couldn’t be with the one he loved, he lost control over his emotions and his power. No matter what he tried, the snow wouldn’t stop and as a last resort he was sent away.

When they finally meet again, Anani is hopeful but disillusioned. The law that kept them apart hasn’t changed. How will they be able to find their happily ever after?

And what happens when the snow starts falling again?

Nell Iris is a romantic at heart who believes everyone deserves a happy ending. She’s a bona fide bookworm (learned to read long before she started school), wouldn’t dream of going anywhere without something to read (not even the ladies room), loves music (and singing along but let’s face it, she’s not Celine Dion), and is a real Star Trek nerd (Make it so). She loves words, poetry, wine, and Sudoku, and absolutely adores elephants!

Nell believes passionately in equality for all regardless of race, gender or sexuality, and wants to make the world a better, less hateful, place.

Nell is a 40-something bisexual Swedish woman, married to the love of her life, and a proud mama of a grown daughter. She left the Scandinavian cold and darkness for warmer and sunnier Malaysia a few years ago, where she spends her days writing, surfing the Internet, enjoying the heat, and eating good food. One day she decided to chase her life long dream of being a writer, sat down in front of her laptop, and wrote a story about two men falling in love.

Find me on social media: