Release Blitz: Give Me A Hand by Gwen Martin #Excerpt

Give Me A Hand
A Beyond Desires Series, Book 1
Gwen Martin
M/M Romance, Friends to Lovers, College Roommates
Release Date: 03.10.20 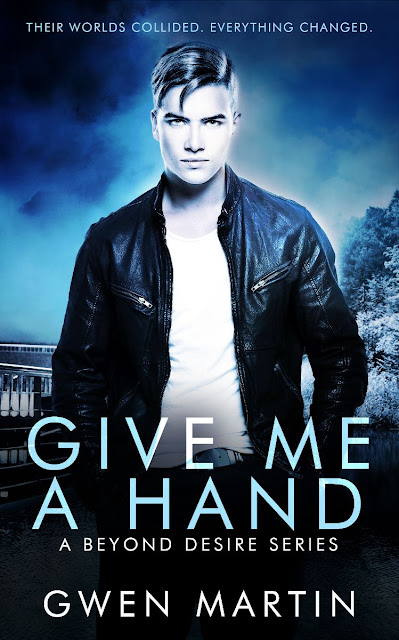 THEIR WORLD COLLIDED. EVERYTHING CHANGED.

Cam and Jude had been college roommates for two years, fitting into each other's lives with ease.
That is, until Cam walked in on Jude getting off alone in their shared dorm bathroom.
Everything shifted between the two of them, awakening feelings Cam hadn't felt for anyone in a long time. Feelings Cam believed had shriveled up after surviving a near fatal car accident to then suffer a disastrous breakup with his first love.
Since then, Cam kept his heart sealed tight in a fortress, keeping himself busy with a lot of mindless hookups and a steadfast refusal to ever commit.
Cam's life had been predictable. He knew what he wanted.
Until that impromptu mutual orgasm with Jude.
Cam didn't want a boyfriend, and he certainly didn't *need* a relationship.
But he knew one thing he did crave and that was more of Jude Ellison.
Will Cam be able to work through his painful past if Jude offered him a chance at more?

***Give Me A Hand is the first book in the Beyond Desire Series, but is a standalone novel. Each book in the series will feature a different couple, but the couples will show up throughout the series. It is approximately 50,000 words and a New Adult Friends to Lovers romance between two men with explicit language and graphic sex intended for Adults Only.***

Cam almost didn’t catch the brush of the back of Jude’s hand against his, almost didn’t notice the sweep of a knuckle. Cam shut his eyes for a moment, head swimming from the beers he’d had, and there it was again, the ghost of a fingernail gliding over the back of his wrist.

Cam swallowed hard, his brain at war with itself. He hadn’t been nervous about such a small gesture in so long, it felt like he was learning how to flirt all over again. But this wasn’t just some girl he met or a guy he was having a Netflix and Chill night with. This was Jude.

Images of Jude’s naked body flooded Cam’s mind. The way his smile always had Cam smiling back. How when Jude came, his whole body grew rigid and his mouth went slack. The only way Cam would find out if Jude was touching him on purpose or not was if he did something about it.

He inched closer towards Jude’s hand, just a little.

Cam opened his eyes. He glanced at Jude, and he was definitely closer, his legs spread out farther, his knee a mere inch or two from Cam’s. Cam widened his legs until their knees brushed, and Jude’s fingers moved, locking their pinkies together.

It felt juvenile, but the hammering in Cam’s heart was telling him that there was more to this than what he was seeing, and he couldn’t help the swelling in his pants alerting him it was doing something to him on a biological level.

Jude shifted to set his beer bottle on the floor, never breaking their small contact. Cam did the same. Cam’s body was thrumming, but he was too nervous to do anything yet. He didn’t know where this could go.

They remained close and silent, no sound but the movie in the background. It sounded louder than Cam knew it was, the screen brighter, and everything felt warmer, as if Cam had stepped outside into the humid Floridian night.

When Jude’s hand finally wrapped around Cam’s wrist, Cam stared at it for a long time in disbelief. Jude’s thumb kept brushing over Cam’s wrist, soft and sure, and that made Cam’s chest squeeze and lift in his chest. He wanted this, he wanted it so badly.

Cam turned to Jude’s blue eyes locked onto him. Jude’s gaze was heated, and his lips were shiny. They were close, very close, and Cam had the sudden urge to close the gap between them—to see what his mouth tasted like.

About the Author
Gwen Martin lives in Florida where the sun is always shining, the humidity is always high, and Disney is just a hop skip away. When she’s not trying to write one of her million story ideas, she’s usually hanging out with her husband and four cats.

Gwen first started writing at a young age, coming up with stories in class instead of paying attention to the math lesson. Since then she has been exploring her love of writing in various fan communities where she has learned how to cultivate character development and romantic interactions.

She has a strong love affair with cold brew coffee, black cats, and nerding out in various fandoms. When she’s not writing, she’s reading everything she can get her hands on, listening to a lot of lo-fi and making playlists, chilling with her four gatos and obsessing about Pusheen. Because it’s always about Pusheen.

Posted by Diverse Reader at 5:09 AM