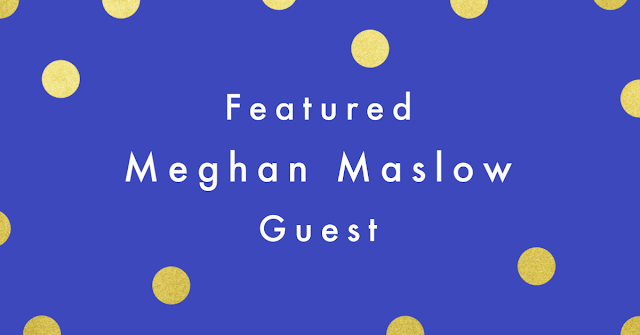 We are so happy to have Meghan Maslow here with us today for an awesome guest post. So much to love here! There's a cover reveal for her upcoming book His Fairy Share!!! So, take a seat and get comfy! 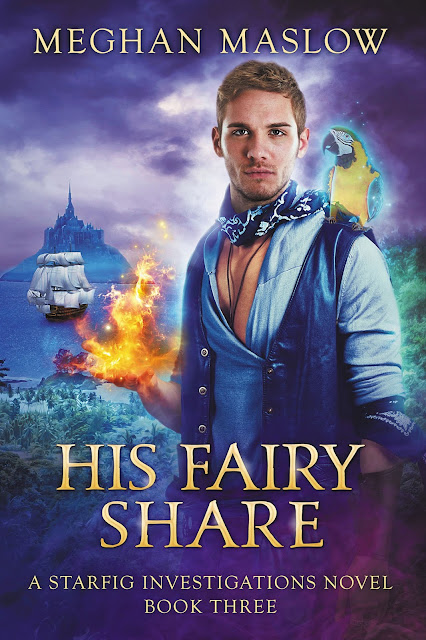 “Why does this always happen to us?” –Quinn Broomsparkle, wizard extraordinaire

Six months have passed since wizard Quinn Broomsparkle left behind his indentured servant shackles. He’s in love with his half-dragon/half-fairy familiar, Twig Starfig. He’s got a home. Friends. A job. And a father-in-law he could do without. A pretty close to perfect life. But as Quinn has learned the hard way, things rarely stay peaceful for long. Especially when a Starfig’s involved.

Summoned to his home realm and a past he’d thought left behind, Quinn and Twig find themselves in the middle of evil machinations . . . with no clear enemy. When Quinn’s younger brother, Zak, goes missing, it’s Starfig Investigations on the case.

Being the first wizard in a thousand years isn’t all it’s cracked up to be. On top of a missing brother, a broken-hearted red fury, an archivist with a secret, and a ghost pirate-parrot who’s determined to return to his captain, Quinn and Twig’s relationship is sorely tested when questions—and unhappy answers—about their mating dilemma are pushed to the fore.

All Quinn wants is his fairy share of happiness. Is that so much to ask?

Thank you, Meredith, for letting me crash Diverse Reader! You won’t regret it.
Twig Starfig: Much.
As you can see, I brought along Twig to keep me company and chime in when necessary. He’s thrilled to be here.
Twig Starfig: But he wasn’t.
Ahem, anyway . . . So, you guys, I’m excited—and relieved—to do the cover reveal of His Fairy Share today. I’ve actually had the cover for a looong time and have been sitting on it until I had a release date. Psst, it’s May 1st.
Anyhoo, along with the cover reveal I thought I’d talk a bit about pirate ships. Yep, Pirate ships. I assumed it would be so much fun to set some scenes on a pirate frigate. Pirates, swashbuckling, the open seas, what’s not to love?
Twig Starfig: Famous Last Words.
If I ever decide to write about ships again, you all should slap me. Hard. Probably more than once.
See, I used to be a researcher as part of my evil day job, so research has always been a joy. I can go waaay down that rabbit hole for hours at a time. And I did. Because it turns out, I knew less than zero about pirate frigates . . . or really, ships in general. Lol. I mean, I get that boats are meant to be water transportation. But that turned out to be the extent of my knowledge.
So naturally, pirate frigates (and galleons, and sloops for good measure) are a central piece of His Fairy Share. I didn’t need it to be 100% accurate.
Twig Starfig: But she did.
Yeah, okay. I watched videos, printed graphics, talked to those with boats, and pretty much drove myself crazy. Most times when I’m like this, I actually love the subject and gain a real appreciation for it.
But me and boats? We aren’t friends. Not even frenemies. My idea of hell = floating on the water in just about any type of watercraft. Totally not joking. I went on one—ONE—cruise and I was so seasick that I passed out and started going into shock. True story. I’ve managed to canoe a few times, but it was not fun. Did I mention that I get seasick??? Yeah, even in a canoe. And the one time I did an extended canoe trip with family, we tipped over in the Ozarks, and I lost my pack with extra clothing and necessities. Even the shoes I was wearing flew off my feet! I had to go several days without shoes. Without. Shoes. It’s like boats have it out for me. I think Twig and I are kindred spirits in the karma department.
Twig Starfig: Unfortunate, but true.
I don’t know what I was thinking. But you have to admit. A pirate frigate just sounds like a cool place to have some scenes, right? Except that when I started them, it read like this:
“And then I walked up that plank-thingy [the thing that helps you board a boat] to the deck [OMG! I think I might have gotten this right], and I [did pirate things]. Then I walked to the frontish area of the ship [look that up], near one of the seven masts [wait, how many masts are on a frigate anyway???], and the sails, they billowed [or something cool like that].”

I wish I were joking. But in the end, I’m pretty sure did a passable job—I think—and I learned a lot. Like to never, ever write about ships again. Or boats. Or even paddle boats. I’m just going to stay away from any kind of watercraft from now on. At least until the next book . . .
Twig Starfig: Wait, what??? 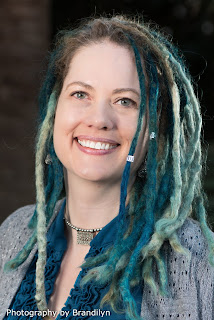 If you're looking for comedy, fantasy, or dead bodies in your romances (sometimes all three at once), I'm your gal. I'm also a. . . gasp!. . . extroverted writer. It seems counterintuitive that as someone who is energized by people, I spend most of my time alone. Yet, that's the case. And I don't mind.

If I get writer's block or start to go a little stir crazy, I head out to a coffee shop, a restaurant, a friend's place--anywhere to fill up my need for human contact. It also helps that I spend a lot of time with the voices in my head. Some of them are really quite opinionated.

I love writing gay romance because I'm a sap for a happy ending, and I believe everyone—regardless of orientation—should be able to find books that have them. And if that romance comes with a dash of mischief, magic, or murder, all the better.

I believe that life is for living, kindness is contagious, and a good book makes the world a better place.

Posted by Diverse Reader at 7:13 AM