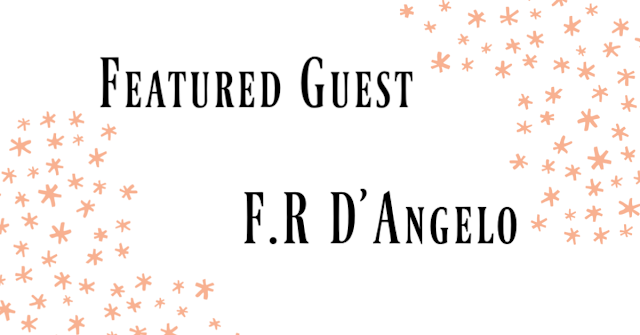 Diverse Reader is so happy to have author F.R D'Angelo here talking with us. This is a really awesome post and I'm positive you'll enjoy it as much as I have. Sit back and relax.


(And not the good kind)

Toni here, if you don’t know me, I write under the Pen name F.R D’Angelo, here is my experience of my first year as an author in gay romance. I am hoping by sharing this, it will help others.
2019 Was a disaster in my first year as a gay romance author, as the year went on, I learnt a lot of lessons by the end of the year. And I would like to share these with you.

Way back in 2017 I sat at my PC to write a book, Azkin walked into my mind as a medium I presumed he was a connection for a loved one, never did I realize at that time I was writing a shifter story, the world I built throughout that series came built for me, I just had to write I, The Aztec Alphas was born.

I just happened to realize as a dyslexic writer it would be hard to edit this.

Long and short of it I had four books in the series now wrote, and needed an editor, so I asked around then I saw a thread on an author group, and someone was recommended, so I contacted her. She said she would work with me and she could easily work with my dyslexia. I had been recommended others as well, though between one email and another I had hired her to do books 1- 4 (oops)

The first book came back I was so raw and green I didn’t even know how to use word the review panel nothing, saying this now is embarrassing. I was none the wiser and figured I would learn, and loaded trusty google. I pushed through and when the first set of edits came back, she said just accept them and send it back, I did. Second round of edits, and the same thing and I hired a proofreader.
I heard back from the proofer I had hired she went on to say Aztecs was badly edited. I then contacted the editor sent it back to her the next day. She then sent it back to me ready to go. So, I sent it to be formatted, and that was that. A learning curve was happening, I had no idea what I was learning until I released it.

The book released two days before it should as I wasn’t sure about Amazon, and my nerves where shot, my PA for me at that time, rushed to help me get Aztecs advertised around Facebook that day. Again, my nerves where shot I was out of my depth, I was too nervous to ask for help throughout his whole process, I was petrified a lot. I keep myself to myself and only after the whole writing process, which I felt lonely, I realized I was suffering from heavy depression being home for months with no car. I went out five times in eight months. Anxiety was shaking the very foundation I was sitting on and my health hit the floor. My GP put me on medication and asked me what had caused this. I was afraid to say I was writing; I was petrified I couldn’t do it. All the things I wasn’t good at were now on out there for everyone to see.

When your own family tells you as a kid your slow and need to be in a special school, this here was where I started to believe them. I pushed through as I believed in my story, I still do, and I loved writing it; it took me into worlds to escape my own loneliness.

The book release should have been happy, it was anything but and proved to be the worst moment of my life being lived on the world stage technically as an author everyone was seeing it. That’s how I saw it and yet barely no one was watching. And less were paying attention. Aztecs went to #37 within days even worse, more people had seen it. Until I had a message from an author I have come to see as a good friend, asking me who me editor was?

I went on to say, what she said afterwards broke my world that day. I was so shocked and stressed I pulled the book from sale.

As it happened LN Manning and others had used the same editor, with the same results. The book was full of mistakes, spelling and dialogue, my dyslexia looked worse after editing than it did before, she put me in touch with her editor, the same one that rescued her book. Unfortunately, by then most of the bad reviews on editing had already gone up on her book. Mine, well I didn’t even worry about the bad reviews, I was more worried that I had let down readers who had heard about the book it was a mess. I put up statement on my page saying there was an issue with the book, and I was removing it from sale, until it had been rectified. In all honesty, I couldn’t sell it.

I was fuming, lesson number one. Don’t believe all you hear follow through and read your own work, with a voice over, that’s just how I discovered I can hear a mistake, though not see one.
Author and editor Angie Martin rescued me that day, if she hadn’t have contacted me that night, I would have scrapped all books and never wrote another word. When this all was going on, I couldn’t bring myself to email the old editor or contact her in anyway, I was afraid I would be too unprofessional and strangle her, metaphorically speaking.

Lessons didn’t end there, in the middle of March I wrote Is There Redemption, only to use an editor that wasn’t a proper editor or up to my standards, I lost that money and ended up with a badly edited book.

I asked for my money back, considering her diabolical work she wanted a review. (Insert eye roll)
Another lesson learnt, add in the PA that I paid for six months with no work at all doing, another one that went missing in the middle of a release and still invoiced. I had paid these to do my advertising and low and behold no advertising, no marketing not the work I was paying for, and another lesson learnt.

What I did was when my Pa went AWOL asked around all groups I was on, asked authors if I could share my work, and of course I learnt that these people don’t bite. Not one author turned me away.
If I hadn’t have been through all of that I wouldn’t have found the authors I now consider friends, I wouldn’t have found Zoe Perdita from Rainbow Danger Designs, and Lescourt author services. Annabella stone, LN Manning, and I wouldn’t have found that authors are in general a humble lot who have bent over backwards to help where others have failed.

Lescourt took the stress out of book releases, I wish I had found them before my blood pressure went up. Diverse Reader for giving me a platform and many more too many to count who have made me welcome in this community. I kept going because these handful of people believed in me, a stranger a person, a human being. Who are now more like family than my own family are, these people believe in me, so I will keep learning and though I might continue to keep having cock-ups, all in the best possible way?  I will push through and ask when I need help.

If you are new to this, trust me everyone is approachable, just ask for some recommendations. Don’t be a Toni and try to do it alone it takes longer and gives you anxiety high blood pressure and a coffee addiction.

Writing under the pen name F.R D'Angelo.
Living in Northern Ireland. Deep in the countryside, the Mourne mountains is the view from my window, I am an author, a mother, and a dog mom.
I write Adult MM Romance; my characters are meant to be fictional, though they sure don't feel fictional to me. Somewhere in another world through all dimensions of time, the Aztec pack lives.
​
For the near future, I am wrapped up in the Aztec pack, writing about a prophecy, that revealed to Zain that he really was the fated mate to the Alpha he had been protecting, and had loved all these years.

Azkin on the other hand, wasn’t aware he was the Aztec wolf, the shifter world had been seeking for so many years. An Alpha that can heal, grant life and take life away. All he had to do was find his mate.

The Aztec Alpha Protection squad had been protecting alphas who lived in the human world for many years, observing many alphas from afar. whilst employing the best protectors the US army shifter unit had to offer.
The magic of the other world is in the books I write, it's not forced it just is. We all need a little magic in our lives.
I am also a clear channelling Spirit Medium, so channelling these guys comes easier to me.

The biggest challenge so far has been the dyslexia. I have a set routine, and many do not run on the same. It's been frustrating for the most part. Though lots of Coffee seems to help, though the animals in my life ground me.

My passion lies within the paranormal of our world, I also love Science fiction.
​
I also show boxers, and have three homebred show dogs.
My Journey with the Aztecs started at NaNoWriMo 2017
I sat to write a book when Azkin stumbled into my mind, he was lost, stumbling around in a forest on his family ranch, it was the fifth anniversary of his parents' death. As a medium I had been channelling a book, for my work called Alive and Free, however, as Azkin came forward I began to realise it wasn’t a lost soul looking for a family member. He was a character looking for an author to write his story, I remember that day.

The forest he was lost in was vibrant in colour, the trees where  there just at the end of my fingertips and yet It could have been a vision, never having had written a fiction book before I wasn’t really sure if I am honest if I was even doing it right.

​I had been through the no way I can’t write a book before now, with alive and free. So I suppose this was the next step. And as I had dived into a book, the year before. Not even realising it was a gay fiction until I read their story. The connection the men had for each other was so much more real personable with all the feels. Then any of the books I had read before.

Posted by Diverse Reader at 7:21 AM