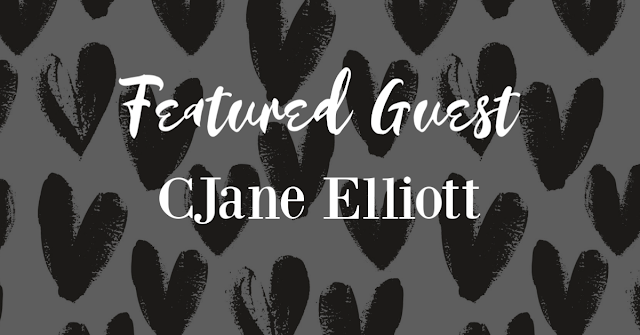 Diverse Reader is thrilled to have CJane Elliott on the blog again. It's always wonderful when she comes by. She's talking about her re-releases after she's now self publishing. So, check it out!

Hi, everyone! Thank you to Mere for hosting me today on Diverse Reader. I’m CJane Elliott and I write contemporary m/m books that are on the sweet side. This year I have taken the leap into self-publishing. I severed my ties with Dreamspinner Press and now own the rights to all my titles. I’m just beginning to re-release my books back out into the world of Kindle Unlimited/Amazon, and I’m grateful to Mere and everyone else in our writing community for the support you’ve given me and the other former DSP authors.

For my first re-release, I chose one of my favorite novels, All the Way to Shore. This book is full of tropes – hard-driving CEO, downtrodden owner’s son, ugly duckling into swan, enemies to lovers, hidden identity – and most of it takes place during a Caribbean cruise. There’s plenty of drama and a lot of sweetness.

All the Way to Shore is Book 1 in the Stories from the Shore series and was Runner-Up for Best Bisexual Book in the 2017 Rainbow Awards.

I’m here today with an excerpt I haven’t shared yet and then a sneak peek into my next release, In Over Our Heads, Book 2 in Stories from the Shore. 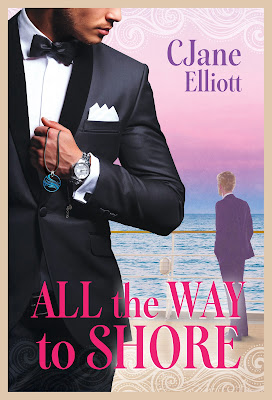 What happens when a cruise ship romance crashes on the rocky shores of reality?

Poor-little-rich-boy Jonathan Vallen, the reluctant heir to Vallen Industries, is more interested in music and gardens. He clashes with new CEO Marco Pellegrini, a self-made man and rising star in business, who is brought in to salvage the company. When they meet again on an LGBTQ Caribbean cruise, Marco doesn’t recognize Jonathan, who has spent a year transforming from an ugly duckling into a very sexy swan. After Marco shows interest and sparks fly, Jonathan reluctantly assumes a false identity, egged on by his cousin Anthony. None of them expect a shipboard fling to deepen into true love.

Back on land, the romance crashes when Marco discovers his perfect man is not only a lie but the son of his boss, Frederick Vallen. Jonathan resolves to win Marco back, but Frederick takes vengeful action. Jonathan and Marco must battle their own fears as well as Frederick’s challenge to get to the future that awaits them on the horizon.

“So? Spill, Jonny! This is so exciting—you and Marco Pellegrini. Divine! You looked so into each other on those deck chairs, me and Sophia almost hated to interrupt you.” Anthony leaned closer to the mirror. “Is that another gray hair? Begone!” He plucked out the hair, then turned to Jonathan, who had fallen onto one of the beds in their stateroom, exhausted. “Well?”

“He’s… nice.” Jonathan stared at the ceiling. “Way nicer than I remember him being. Now I feel awful about lying to him.”

“Oh, honey, don’t even go there. He doesn’t need to deal with your Jonathan Vallen baggage, and neither do you. You’re here to have a fling, remember? Hot sex, hot men, hot tropics, baby! Marco is obviously interested in Jonah Rutledge, so run with that and have a ball.”

Jonathan made a face. “There’s something faulty with your logic, but I’m too tired to figure it out.”

“Huh?” Jonathan propped himself on his elbows to peer at Anthony. “This isn’t Formal Night, is it?”

“No.” Anthony leered at him. “It’s Leather Night.”

Jonathan fell back on the bed with a groan. “Kill me now.”

“My advice is to stop resisting and go with the flow.” Anthony pawed through a suitcase.
“Where did I put our leather vests? Tell me more about what you and Marco talked about.”

“Music.” Jonathan smiled, remembering. Who knew he’d find a musical kindred spirit in Marco Pellegrini, of all people? It had been sheer joy talking about the composers they loved. Marco had been flatteringly impressed that Jonathan had attended Berklee College of Music and Jonathan had found himself sharing about singing Bach cantatas and studying piano, organ, and harpsichord.

When Anthony held up a piece of leather that resembled a harness more than it did actual clothing, Jonathan sighed. He hoped his nipples wouldn’t be on display—not at the dinner table, anyway.

“He likes classical. We have surprisingly similar tastes. I almost told him about singing in the chorale, but I didn’t want to say anything placing me in Boston after college.” He put a hand over his eyes, remembering his gaffe. “Jesus, I already almost blew it. I told him he seemed different.”

Anthony’s eyes got round, and then he giggled like a bad little boy. “Oh, tarnation! What did he say?”

“He didn’t pick up on it, like that it meant I knew him from before.” Jonathan clutched the bedspread. “Crap, Tony, how the hell am I going to pull this off? Maybe he’ll dump me for someone else tomorrow and I won’t have to worry.”

“Bite your tongue, honey. Here’s what you do: dive into your Jonah persona—wow, it even rhymes!” Anthony did a little dance, singing, “Jonah persona, oh yeah, Jonah persona,” until Jonathan threw a pillow at him.

“What does that even mean? Pretend to be someone I’m not? Not likely.”

“No.” Anthony perched on the edge of the bed and stared down at Jonathan. “You know who you’re not? You’re not Jonathan Vallen—poor little rich kid and self-saboteur. That’s history. Just be yourself. Your real self. Gay, musical, loves flowers and dogs, sweet guy, cute as a button. You’ve never let that guy totally out, and now’s your chance.”

***
Anthony gets his own story in the next book in the series, In Over Our Heads, scheduled to be released in late February. 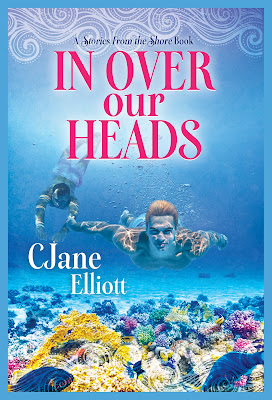 A second chance for romance on a scuba diving vacation plunges Anthony and Walter into deep waters—will they use love’s lifeline or go under alone?

Party guy Anthony Vallen believes in happy endings—just not for himself. He hits Key West for a vacation with friends, ready for some fun in the sun. To his horror, the owner of the local scuba dive shop is Walter Elkins—former scientist, meticulous control freak, and the guy who broke Anthony’s teenaged heart. Despite being as different as two people can be, they fall for each other again, and Anthony’s reasons for shunning romance no longer hold much water. But Walter has his own barriers to love, and whether he will come aboard remains to be seen.

Scuba diving, a hurricane, and a chance to mend a broken heart equal a vacation Anthony will never forget.

Two bartenders were working that night—a guy and a girl. I figured the guy must be Miles’s “boring boss.” As we reached the bar, I caught a glimpse of his thick dark hair and well-built body displayed nicely in tank top and shorts, but I didn’t recognize him until I saw his profile up close. I knew that nose and those lips. I’d know them anywhere. He turned, and his eyes met mine. For an interminable moment, he stared at me. Then he turned away abruptly, busying himself with the cash register on the back wall.

I clutched Jonathan’s arm and dragged him backward several steps.

“What gives?” Jonathan cast me an indulgent smile, used to my dramatic reactions.

“Look at the bartender,” I hissed.

“Huh?” Jonathan squinted over at the bar. “Who?”

“The bartender at the end. The guy. I think it’s Walter.”

I wanted to slap him. Who’s Walter? Only my first (and last) true love. Only the boy who’d broken every tiny bit of my seventeen-year-old heart—smashed it to smithereens and then stomped all over it for good measure. Only the reason why, despite being a cheerleader for romance, I was alone, always the bridesmaid and never the bride.

“Walter Elkins, you fool,” I whispered. “From Franklin Prep?” Jonny’s blank expression made me want to murder him. “The first guy I ever—”

Marco and Sophia were ordering our drinks from the other bartender, a tough tattooed gal. Walter (if it really was him—I was praying I’d been mistaken) turned away to pull some draft beers, and I saw my chance for escape.

“Oh God, let’s get out of here.” I tugged on Jonathan’s arm. Even hanging around for Miles the Cutie wasn’t worth the sheer humiliation of coming face-to-face with my past.

Jonathan peered at the bar. “How can you be sure it’s him? Hasn’t it been, like, ten years?”

“Twelve, to be exact, but who’s counting?”

Marco turned and called to us. “Jonathan! Anthony! Mudslides await you.”

Shit, shit, shit. Marco would have to use our names at that exact moment. Walter wasn’t likely to recognize Jonathan, who’d left his nerdy persona behind over a year ago, but I looked pretty much exactly as I always had, even in twelfth grade. Blond, tall, skinny, and flamboyant as hell. I was sure Walter had recognized me in those few seconds our eyes had met. And was now ignoring me, giving me a sick sense of history repeating itself.

Sophia said something to Marco in her animated way, music pounded out of the speakers, Jonathan nudged me forward, and I was done. Dead meat. Crocodile fodder. My ghost was wafting to the bar behind which stood Walter Elkins, because the rest of me was disappearing into the worst memories of my life. 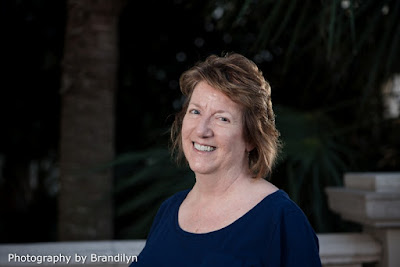 After years of hearing characters chatting away in her head, award-winning author CJane Elliott finally decided to put them on paper and hasn’t looked back since. A psychotherapist by training, CJane writes sexy, passionate LGBTQ romances that explore the human psyche. CJane has traveled all over North America for work and her characters are travelers, too, traveling down into their own depths to find what they need to get to the happy ending.

CJane is bisexual and an ardent supporter of LGBTQ equality. In her spare time, CJane can be found dancing, listening to music, or watching old movies. Her family supports her writing habit by staying out of the way when they see her hunched over, staring intensely at her laptop.

Sign up for CJane’s newsletter or become a member of her Facebook group to find out about special offers, presales, and her upcoming re-releases:
cjaneelliott.com/newsletter-sign-up
facebook.com/groups/RainbowReadersClub

GIVEAWAY:  Sign up for CJane’s newsletter for a chance to win your choice of a free audiobook or free eBook of All the Way to Shore.

Posted by Diverse Reader at 5:40 AM