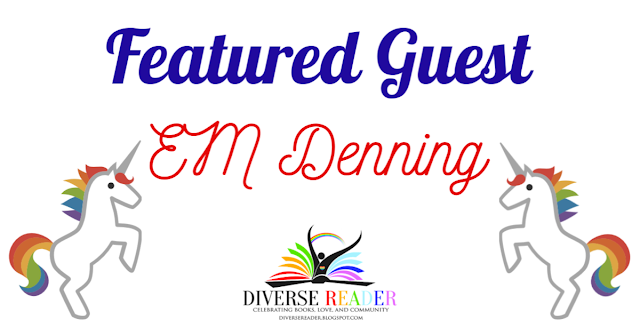 Diverse Reader is very happy to have EM Denning stopping by today. She had a surprise release recently The Secret Thing and she's sharing some thoughts with us and how special this book is to her. So, sit back and enjoy.

I’m sitting here writing this on the evening of my surprise release having not been able to contain my excitement for this book, I released it into the wild a bit early. There are so many reasons I couldn’t contain my excitement. I’ve wanted to write a book with a character who has a seizure disorder for a long time.

Growing up, I was close to someone who had epilepsy. I wanted to write a book that featured a character who had a seizure disorder, but I didn’t want to make the book about the disorder. I didn’t want to dwell on the angst of youth. The struggle to fit in. The dealing with being different when you’re growing up. Instead, I wanted to focus on life as it is. The reality of moving out on your own for the first time. Escaping an overbearing, but well-meaning parent. Falling in love. Being a friend. A brother. I wanted to write a book where someone had a form of epilepsy, but I didn’t want it to be the source of angst or drama in the book. I wanted it to be something organic, something my character had to deal with.

I think Brandon is the most laid-back character I’ve ever written. He’s this calming influence in Christian’s life. He’s not without a little angst and drama of his own. He’s bisexual, but he married a woman and had a kid. But now, years after his divorce, he’s starting to want to explore the other side of his sexuality, but he doesn’t know how to come out of the closet. He feels incredibly out of his wheelhouse.

I’ve always adored stories with an age gap, and while some of my characters have differed in age, none have been quite so far apart as Christian and Brandon, but I think they work. Even though they’re 20 years apart, they’re both in this transition phase in their life where they’re wanting to figure out their next move, and it helps them bond.

I guess this was a really long-winded way of saying that out of all my books, this is the one I am proudest of. This is the book that means the most to me. I think it’s important as a writer, and a person, to stretch our wings and do things that we find meaningful. My only hope is that others will find meaning in the pages of The Secret Thing. 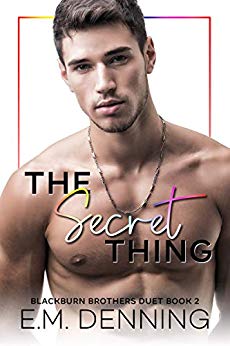 On the cusp of starting college, Christian Blackburn has had enough of his meddling, helicopter mother. He lucks into a room in a gorgeous house close to campus and away from the noise of dorm living. His landlord, Brandon, is a surprise. It doesn’t matter to Christian that Brandon is twice his age. He’s good looking, kind, a hell of a cook, and he doesn’t treat Christian any different because of his seizures.
If only Brandon wanted him back.
Brandon Hayes is comfortably divorced, but his life would be better if well-meaning people kept their nose out of his affairs. To ease his ex-wife’s concern that he’s living in a house far too big for just one person, he takes on a roommate. The much younger Christian is smart and charming. He’s older than his years, and his presence in Brandon’s life wakes something up inside he’s kept hidden from everyone. Having Christian around reminds Brandon of his attraction to men, a pull he can’t ignore.
One kiss changes everything.
Their chemistry is off the charts and their lives fit together in a way they never expect them to. Battling the age difference, a nosy parent, and the fear that people won’t accept them as a couple, they agree to keep their relationship secret. After a tumultuous weekend away, Christian decides that he wants Brandon by his side, and doesn’t care who knows about them. But what will happen once all Brandon’s secrets are out in the open?