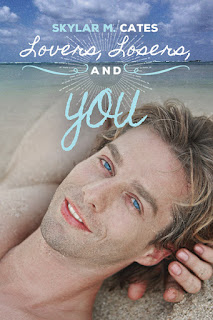 Title: Lovers, Losers and You

Blurb: How can you lose one dream and still find another?

Owen King is a lonely history teacher who wants to be braver. So when Owen learns about the deceased brother he never met, he breaks free of his safety net and risks answers. Despite his loving, adopted family, Owen wonders if there are missing pieces inside of him. Visiting the seaside town of Ocean Vista, where his brother lived and died, will be no vacation.

Andrew Teagan wants to be a winner. After being dumped by his last boyfriend, Andrew is through letting others dictate his life. To prove that dreams are possible, he’s going after his ambitions full force. Having signed on for a cooking reality show, Andrew’s ready to make his small café into a sizzling success.

When Andrew aids Owen on the beach, what starts off as an act of kindness turns into a hot temptation. But can a sweet budding romance survive when the time comes for Owen to leave town? Both men must learn to trust each other if their love will conquer the miles between them.

IT HAD been Owen’s idea to ask for his contract a week early. St. James Academy usually delivered them in the faculty mailboxes a day before spring break, but he had been eager to see if he would be offered an increase in salary. The students had voted him teacher of the year, and Owen had single-handedly slaved over the new schedule that would rotate their classes more like a college and create a more flexible day for students and faculty alike. Everybody had been excited and full of praise for his suggestions. It wasn’t mere ego to think he’d earned the 5 percent that more experienced faculty received. Owen tore open the manila envelope and quickly scanned its contents, his heart thumping hopefully.

Instead of an increase, though, he found something else entirely.

Owen had spent years telling himself all of it mattered: awards, student reviews, hard work. But did any of it? Because more often than not in this world, one misstep resulted in wiping out all the rest of the path.

Son of a bitch.

Now he was blindly heading down the highway in his beat-up Honda, and Owen had the words playing over and over in his head as he drove to the outskirts of the small coastal town of Ocean Vista, Florida. He pulled off to the side of the road to think. Ahead of him was the town and behind him the highway. The day was without the mercy of the slightest breeze, and Owen felt a hot trickle of sweat at his neck.

He’d come to learn about his biological brother’s life. Each time his brother’s best friend Cole wrote to him, it had torn at Owen’s heart until he finally couldn’t ignore the need to visit. If he’d also come to avoid possible threats to his career as a teacher and hide out in a place where nobody knew him or expected anything from him—well, that was a fact he could keep to himself.

His stomach growled. First things first. He needed a good meal. Owen was normally of solid build, but he’d lost some weight. Bone-tired most nights, it was too much bother to cook. If his mama knew how he’d let things slide with his meals, she’d be all over his ass. Cooking good food and teaching manners were the cornerstones of his mama’s parenting skills.

His mama could also pack a suitcase like nobody’s business, having followed Daddy’s career from one place to another. She folded with military precision. Not so Owen, who haphazardly tossed in three pairs of khaki shorts, one pair of jeans, and some random polo shirts. He packed white socks, sensible underwear, and toiletries. At the last possible second he remembered a nicer outfit and a bathing suit, but he had little occasion for other clothes beyond school functions.

Owen gave all of himself to his job at St. James Academy. Hell, he lived at his job. The private school encouraged the faculty to use their tiny campus apartments or be in their dorms as a “parent.” He’d had a plan, mapping out his entire future. He was going to be head of the history department, then assistant headmaster. He’d move into the headmaster’s big sprawling house by the lake one day. Nothing had changed. Only….

Faculty could be dismissed for any reason deemed “immoral” or “unacceptable” behavior not reflecting the values of the school. Private schools sometimes did this, but this was new for St. James Academy. A pushy member of the board of trustees, Mrs. Wilma Temple, or “Mrs. Moneybags,” as the staff secretly referred to her, insisted on it. “The world is more and more filled with degenerates,” she warned as she pointed a bony finger. “We all need to protect the St. James Academy proper way of life.”

Although nobody defined the morality clause to specifically include sexual behavior, Owen could easily imagine their reaction to his arriving with a boyfriend for a student basketball game or theater performance, or even a faculty Christmas party. They’d say he was “flaunting his lifestyle” and “endangering the minds of impressionable, minor youths.” Since this was a private school, not a public one, there was nothing protecting Owen’s job.

He’d been sick when he’d gone back to his small apartment.

Not that Owen had a boyfriend to bring to a school event. He’d been alone and dateless for a long time, at least six months. His family complained good-naturedly that Owen did not make enough time for a proper social life, so busy was he with his lesson plans and textbooks.

For that reason, it had been easy not to share his personal life with his coworkers. He just couldn’t bring himself to sign a contract vowing to uphold Mrs. Temple’s idea of how he should live his life, but neither had he marched into the headmaster’s office and torn it up. He had until vacation ended to decide what to do.

Owen did not want to stay where his behavior would be so monitored and weighed. No, thank you. The ballsy thing to do would be to leave. To be brave like his parents. Like his sister was every day. But it wasn’t as simple for him as that.

St. James Academy was his lifeline. Owen had gone there as a student since sixth grade, when his family moved to the Buckhead area, when he’d craved stability desperately, and he’d thrived there. Owen’s mama, a successful television reporter, and his daddy, the ex-jock who now owned one of the largest sporting goods stores in Georgia, allowed their geeky, dreamy boy to attend St. James, even though they had reservations, but Owen had loved St. James Academy from the first. He loved the big brick buildings and the shade of the dogwood trees, could sit for hours in the immaculate gardens filled with fragrant jasmine and azaleas. He could spend every day with a good book and be perfectly happy. His favorite part of the day had been discussing battle strategies with old Mr. Hewitt, the very history teacher whom Owen had replaced a year or two ago.

Mr. Hewitt—cranky, heavyset, food in his beard—had been the most amazing teacher Owen ever met. He made history come alive. Owen wished for even half his success in the classroom. In those days the school motto was Honor Above Everything. What would it be now? Be Careful, I’m Watching You?

Owen sighed to himself as he drove through the little South Florida town. He’d have to sign the contract and make the best of it. All he’d ever wanted was to be needed by somebody, and his students needed him. The school was his life. He’d have to hope he was never outed on the Internet or questioned too closely by Mrs. Temple. If he ever did find love, he’d have to hope the guy would be willing to spend most of their time in private places. It seemed like the best solution, the most logical one. The one that would keep all his planning on track.

He needed this temporary change of scenery. Ocean Vista was tiny, but it had a long main street filled with cutesy shops and restaurants. Perfect. It was early morning, not many cars around, and Owen had no trouble parking. He headed toward the nearest place with a sign that promised a meal.

This was actually tricky for me at first. I was given this book to read for a blog tour not knowing it was book 2 of a series. So this review is based on reading this first. I was a bit confused at first about the pain and loss of Brendan. Of course Skylar does a great job of explaining who Brendan was in book 1 and the story there so I got through my confusion quickly. I’d recommend reading book 1 first though. Owen and Andrew are such a stunning pair in every way. Owen is from Georgia and Andrew is from Florida and of course they meet and just click perfectly. This story was about inner strength. Knowing your worth and respecting boundaries. It’s about growth, acceptance, and healing. So much healing. I can feel the pain of Brendan’s loss in every man in this house. I teared up so many times and was blown away by the elegance of Skylar’s writing and passion in the emotion of her characters.
This is fabulous work and highly recommend.

Skylar M. Cates loves a good romance. She is quite happy to drink some coffee, curl up with a good book, and not move all day. Most days, however, Skylar is chasing after her husband, her kids, and her giant dog, Wasabi. Skylar dreams about spending her days writing her novels, walking along the beach, and making more time for her good friends. On a shoestring budget, Skylar has traveled all over in her early years. Although, lately, the laundry room is the farthest place she has visited, Skylar still loves to chat with people from all around the globe.

September 16 – The Land of Make Believe

September 18 – Divine Magazine
Posted by Diverse Reader at 5:28 AM