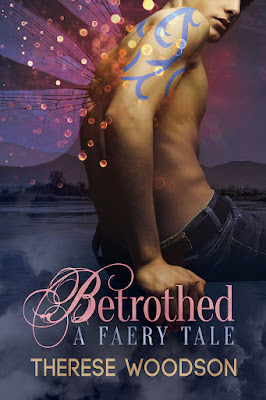 Faery royalty have always married for duty rather than love. Prince Chrysanths should be no different – except with a human for a father, the prince known as Puck already is different. When he is betrothed against his will to Prince Sky, Puck flees to his father in the human world, only to have Sky follow.
Prince Sky Song of the Clouds isn’t thrilled with the prospect of marriage either, but is bound by duty to follow through. If he can’t win Puck over, the faery realm might very well dissolve into utter chaos.  Too busy arguing, Puck and Sky are unaware there are others with a vested interest in seeing the betrothal fail. In a bid for Puck’s crown, they’ll seek to keep them apart, even as Puck and Sky realize that duty and love don’t always have to be mutually exclusive.

Hi and welcome to the BETROTHED: A FAERY TALE blog tour.

Thank you to Diverse Reader blog who was kind enough to host me on the fifth day of my tour.

Please follow me around and get to know the faery princes Puck and Sky and how their world changes due to one (annoying) law. (Schedule here: https://theresewritesthings.wordpress.com/2015/08/25/blog-tour-for-betrothed/)

Instead of an excerpt today, I wanted to give readers an idea of how Puck and Sky look in the faery realm. Here are descriptions taken right from the novel.

Since Puck is half-human, he does not have wings like his full faery counterparts. As an Earth Faery, Puck is associated with plants and trees which are represented by his markings.
His eyes shone a bright honey-brown, his hair a darker luster like polished chestnut, and his markings, faint green and light oak, twisted and climbed over his arms, and around the high collar of his throat, lovely against his luminescent skin.

Sky is from the Air Kingdom. He has dragonfly-esque wings and dark markings like swirls of air, but he looks more like his father than his mother.
He was tall for a faery, with broad shoulders, and long legs, traits his mother said he inherited from his father. His markings, too, were different, a deep blue rather than the silver of his mother and sisters, his eyes dark while theirs shone crystal blue.
Not only do they have to contend with their cultural differences within the Faery realm, Puck is also half-human and thus must also reconcile their differences on that front as well. It makes for an interesting courtship to say the least!

Review
Okay, so… This is an interesting story. We have Prince Chrysanths (aka Puck) a half fairy half human who is basically being told he needs to marry Prince Sky. Arranged marriages *sigh* what can you do, right? Well this was fascinating because, as much as I was like, WHAT! No! That’s just not right, we need to be allowed to love who we love… I, well, LOVE Sky. He’s fantastic and Puck needed to get past his whole arrogant jerky self to see that. Now, I get Puck’s feeling. He was an ass, but rightly so for a while. I put myself in his wings and saw how his reactions were warranted for a time. Thing is, Sky isn’t dead set on this as a fabulous idea but he’s willing to try and Sky pulls out a lot of stops to get Puck to see this. Others want them to fail. THE FATE OF THEIR LIVES DEPEND ON IT! Oh the drama!!!
So Puck hates Sky, Sky isn’t thrilled with Puck at first BUT, those are the best books. Seeing sorta enemies become lovers.
This book has a lot: Sex, drama, little fluff. Fun all around!

Giveaway
Therese Woodson is giving away 2 copies of her book Betrothed: A Faery tale.
Click on this Rafflecopter link to enter!

Author Bio
Therese Woodson is a writer, a wife, a mother of three, a pet-owner, and a long-time member of her college’s sci-fi club. She is a fan of watching bad television shows, superhero movies, and anything involving mythology. She loves creating interesting characters, universes, and stories with happy endings.
https://theresewritesthings.wordpress.com/