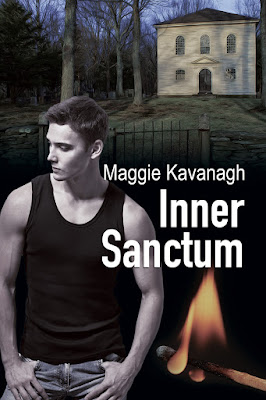 Buy Links:
Amazon
Dreamspinner Press
All Romance eBooks
Dreamspinner is offering 25% off Inner Sanctum from  (Fri 9/18) through Sunday at 11:59 PM EST. The coupon code is InnerSanctum (case sensitive) and is valid on the paperback and ebook, 1 per customer.

Six months into a relationship, things have heated up between political blogger Sam Flynn and FBI special agent Nathan Walker. Though Sam is happy with Nathan and proud of his own sobriety, he’s anxious about what their future holds. Things are also heating up in Stonebridge, Connecticut, as a series of deadly fires puts the community on edge and eventually threatens Sam's comatose brother. As Halloween approaches, fears rise that the arsonist will strike again.

When Sam encounters the main suspect, seventeen-year-old orphan Damon Blake, Sam’s not sure what to do. He knows obstruction might land him in jail, but he finds himself increasingly skeptical of Damon’s guilt. He takes matters into his own hands and investigates, but doing so means keeping Damon’s whereabouts a secret from Nathan and the police. Meanwhile, Nathan wonders what Sam is hiding and grapples with insecurities of his own. Sam wants to confide in Nathan, and Nathan wants to trust Sam, but they discover negotiating new love can be as dangerous as solving crime.

I’m so excited to be stopping by Diverse Reader today to talk a little about my new release, Inner Sanctum, which is the second book in the Stonebridge Mysteries series. This series is considered a ‘true series,’ in that the books follow the trajectory of one couple, Sam and Nathan, as their relationship develops. The books should be read in order to make sense. However, I have included some backstory in the second book for those who prefer to dive right in.

Some people have asked if there is any significance to the title and whether it relates to the mystery. Spoiler alert: it does. I love to discover the meaning of a title as I read a book, especially when it has several layers. I chose to name the first book, Double Indemnity, in homage to the novel/noir film, and I drew tangentially on some of its major themes in the writing. The title for Inner Sanctum is similarly borrowed from a 1948 film noir. In the movie, a man goes on the run after committing a murder and hides out in a boarding house; I thought that corresponded nicely with the mystery plot in my novel, where the main arson suspect hides out in a place you’d least expect. As I was writing, I also found the perfect place to name-drop the title, so keep your eyes peeled.

As far as the romance, this book starts about six months after Double Indemnity ends, and Sam and Nathan are at the point where they’re really starting to think about the future of their relationship. They’re learning how to be a couple—and they’re learning how to be honest and open with each other. One of the major themes in this book is communication, and how difficult it can be to be truthful about what you want, both inside and outside the bedroom. Of course, once that trust and love is established, being in a couple can be a source of great strength. The definition of ‘inner sanctum’ is ‘a private or secret place to which few other people are admitted,’ and in a way I think it serves as a perfect metaphor for the relationship between Sam and Nathan. They are creating their own private, secret space for just the two of them.

There will be one final installation of this series featuring Sam and Nathan. Look out for Blind Spot, coming this winter from Dreamspinner Press.

Author Bio:
Maggie Kavanagh writes gay romances that explore flawed, human characters finding love. She went to graduate school for English literature and reads and writes voraciously, whenever she can get a moment alone. You can find her in the wee morning hours typing away with coffee at hand and cat in lap, happily embodying the romance writer cliché.
While she focuses mainly on contemporary romance, don’t be surprised if a historical or supernatural tale slips into the mix, as she’s always eager to discover different genres. More fiction is forthcoming soon, so stay tuned!

Join Maggie during her Inner Sanctum Blog Tour at the following stops:

What’s your favorite classic film? A random commenter will win their choice of any of my novels in ebook format!

a Rafflecopter giveaway
Posted by Diverse Reader at 4:21 AM