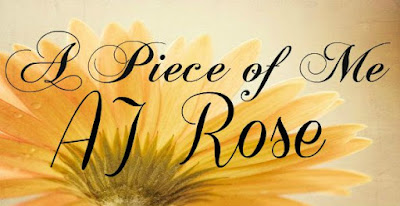 As some of you know I have a monthly feature here on Diverse Reader called A Piece of Me. It's a place where artists, authors, creative minds come to share something about themselves. It's a safe place to just talk and tell all of you a little tidbit. This month we have AJ Rose. Author of the Power Exchange series, Queers, Anatomy of Perception, The Yearning, and most recently The Long Fall of Night.

AJ is sharing more than just a piece of herself with all of you, she's trusting you with her identity. She's sharing her fears and I'm honored to be her safe place to do this. So get comfortable, relax, and let's get to know AJ Rose.

People have a lot of fears, some of them completely understandable, and some completely irrational. For a writer, fear is the second strongest emotion human beings respond to, and is therefore rich fodder for plots. The strongest emotion, is of course, love. If you look at the biology behind both emotions, you’ll find some similarities: rapid heartbeat, increased respiration, dilation of pupils, adrenaline dump, etc….

As an author, I study these emotions in detail to find a vein in which I can burrow so a story I write hopefully touches people, and the characters have chemistry not only between themselves, but from them to the reader. It’s all very psychological.

Of course, like anyone, I hate it when that psychology is pointed at me. I’m pretty reclusive, though in the past, I have spoken out about some of my worst fears, and many of you also know how my love life is going (YAY for the wife-to-be moving to be with me next month now that the immigration papers have been approved). But it’s the fears I want to talk about today, those things that make our palms sweat, that cause our hearts to bang against our sternum.

My fears aren’t always rational. I’ve called them out before in an effort to shine a light on them in the hopes of making them less powerful, taking away their hold on me. It does seem to be working; my anxiety has diminished in the last few months as I put myself through tests. I’ve learned that even if being in public (in almost every way) can put me into an irrational panic due to my social anxiety disorder, I can actually have a good time out with a few mental tricks.

1. Escape route, even if it’s just to get outside for fresh air before going back into the fray.

2. Remembering defined roles. I can grocery shop, eat at a restaurant, go to the post office, have a doctor’s appointment and so many other errand-type things without much effort because everyone has a role, and we pretty much stick with them. A doctor is not going to hug me. A waiter or waitress won’t touch me. A bartender will not take my picture. We all have our roles. I can rely on that.

3. Pretty much nobody seeing me in public is going to remember me in three minutes. And if they do, they’ll remember the chick with the nose stud and purple hair, and if they judge that, it’s my appearance and not an educated judgment of me as a person. Hell, I play up my appearance to use as armor so people who really want to get to know me will give obvious signs of genuine interest. Someone judging my purple hair or brash makeup (when I bother to wear it) isn’t going to like what they find in my personality, so buh-bye. Someone worth knowing would look past my weird outward fashion (non)sense.

4. Worst case scenario plans. Yeah, this sounds like it would exacerbate things, but if I imagine the worst possible thing that could happen to me in a public situation, then I can have a plan in place to thwart or escape it. (I try to limit this to non-violent imaginings, because then my writer brain takes over and does evil things to me. My reputation for breaking readers’ feels doesn’t stop with readers; I do it to myself, too, guys.) But if I imagine bumping into someone I used to know (in my previous pre-divorce life, for example) and they want to hug me (I cannot stress enough how I cannot hug people unless I feel safe, and that feeling often doesn’t hit my internal barometer until I’m in the moment), I’ll have a script to follow so I don’t get arrested for assault.

These things help a lot, in most situations.

What they don’t help with is book conventions. I talk to a bunch of readers online. I can joke, sympathize, connect on a human level, and be totally okay with that because I’m safe behind a screen. Whenever someone would ask me if I was going to any cons soon so they could meet me, maybe get a book signed, or take a picture with me, I’d say I can’t do cons for personal reasons. Because I have anxiety issues. Major ones.

But goddammit! I love being a writer. I love my readers. I want to meet you! I want to maybe shake your hand, trade pleasantries, see what you all look like so I can put a face to a name. I want to do all the aspects of this job, not just the reclusive ones that suit my stupid quirks.

So this year, I’ve been pushing it, trying to shape it into something less constrictive. Last October, I signed up to go to the UK Meet. I chose that one because there are pre-defined protocols set up around hugs and pictures of people being put online. It’s also a smaller con, so maybe less overwhelming. I have escape routes. I’m going with someone who gets me on a level where she’s the only person in history not only to totally understand what’s happening in my brain without me having to utter a word, but she’s also the only person who’s ever been able to calm me in the midst of a panic attack. She’s sworn not to leave my side.

And something amazing has been happening in the few weeks leading up to the con; I’m not thinking of a way out of it. I’m not looking for a reason to cancel. I’m not planning to hide the whole time. I’m actually looking forward to it. I hope this feeling lasts for the duration of the con, but I’m not deluded enough to think it’ll go that perfectly. Still, this optimism has given me the strength to face my second biggest problem with anxiety behind hugs: having my picture posted online.

I can be photographed without problem. It’s the idea of people putting that on the Internet that has me running for the hills. Once it’s online, it’s there forever, and totally out of my control. It’s not just random stranger cruelty I worry about. It’s something more nebulous than that, and I can’t even put it into words without sounding loony.

People honestly won’t care that much, but by having hidden as long as I have, given my semi-public career, I’ve made it worse by remaining elusive. I’ve had readers ask to see a photo of me so they can put a face to the name, if I’m going to grace the back of a paperback release or a dust jacket someday. I’ve got a formulaic answer for that: I don’t know that I’ll ever release hardcovers because of the expense and I’d rather have the blurb on the back of a paperback cover. My face isn’t what will sell books—it’s my words that have always been my greatest asset.

By the time this post goes live on Diverse Reader, the UK Meet 2015 will be in the history books. Readers will know what I look like. They’ll have taken pictures with me (because I’ve decided to go with the flow, another self-test). Perhaps they’ll want to post them online, perhaps not. I’m going to do my best not to stand in the way of that. But that’s not entirely fair to the people who’ve been my internet friends from the beginning, who can’t make it to the Meet.

So I’m pushing myself again. Maybe posting my face online this way will allow me to feel less out of control. Meredith is one of my best friends, and I trust her. I can’t think of a better way to try and conquer one more thing holding me back. It’s not a professional headshot, but it is with my armor. Without would make me feel too naked. Hell, I even upped my armor for this, making it just a shade over ridiculous so I can laugh at it. Hello lips! 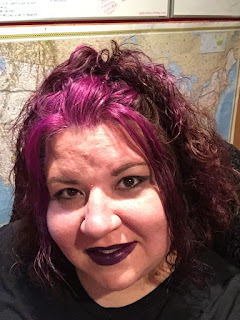 So that’s me. Hi. It’s nice to meetcha. My name is AJ Rose, and I write books for a living. Maybe sometime in the future, I’ll have the opportunity to shake your hand and say hello in person.

And because I cannot take a selfie without making total fun of selfies in general, here’s my duck face. 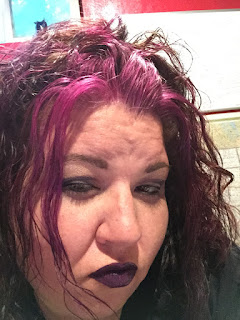 It began with a Halloween themed short story assignment from a second grade teacher, and from then on, AJ Rose fell head over heels in love with writing. Time has seen the beginning and end of many things, college and graduation, a finance career, and a marriage, and through it all, writing has been her first love. Now, AJ is also head over heels for her wife-to-be, fellow author Kate Aaron, who gets it, the twitchy fingers when word counts are low too many consecutive days, the thousand-yard stare when an idea turns AJ's vision inward, and the jitters when the word-babies go out to meet the world. Nothing could stop the tall tales about imaginary people that refused to be ignored. With a life full of this much passion, it's no wonder AJ chose romance. The voices in her head are mostly of the male persuasion, so m/m romance was about the only option. But don't be surprised if the occasional ghost still pops up.