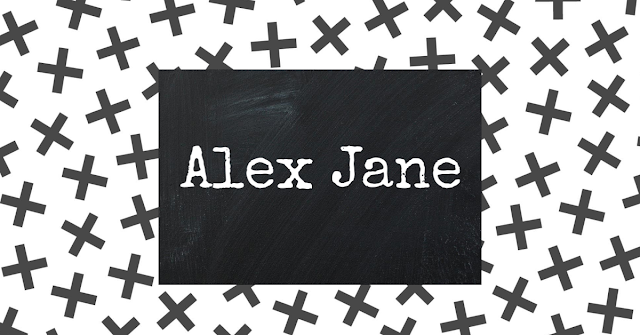 Diverse Reader is so excited to have Alex Jane here to talk about her new release and her brilliant brain! There's a wonderful giveaway at the end so be sure to check it out!

Morning! And welcome to the longest day of the year! Or the shortest if you’re down under. Either way, it’s kinda special and I hope you have a good one.

First, I want to say thank you to Diverse Reader for having me along to talk a little about my new release, A Foreign Country, which is out today.

It’s been two years since the first book in the series, Gazes Into You, was published so it’s about time really that this one made an appearance. Even before I’d finished Gazes, I had an idea of what would be happening in the sequel. But, of course,—like all best laid plans—all my plotting went out the window once I started writing.

Generally, when I get a concept for a story—bunnies ahoy!—, I have a pretty clear idea about how it begins, how it ends, and a couple of scenes in-between. With A Foreign Country, I knew it would start with Jason getting a call in the middle of the night and a terrible discovery. In the middle, I knew that John would be standing at his friend Chris’s door and have the shock of his life. And for the finale, I knew that…well, you’ll see. And mostly that’s fine. I make a few notes, fill in the narrative gaps, mull over what I wanted the story to be about and get going. Except, this time—not the first and probably not the last—the characters started doing stuff that I didn’t want them to do and saying things that weren’t fitting with what I had planned. Not just a spark of inspiration over a bit of dialogue but seriously off-piste, changing the whole feel of your story stuff. At which point you have to ask yourself the big question. Do I beat them with a big stick until they do what I want, or do I let them run with it?

With a standalone story, the latter is not so much of an issue. I figure the worst that can happen is you write yourself into a corner. With a series, on the other hand, one that is five books long and you’ve already been dropping hints about what will be happening in book five, how much of a risk is it to let the characters take the wheel?
It might sound crazy. The characters aren’t real. We create them. We should be able to decide what they do and say and with whom, but I swear it doesn’t feel that way. I suppose because they’re created in our unconscious, regardless of how much our conscious writer brains try to corral them, a little bit of that unconscious seeps out every once in a while and suddenly your fingers are typing and all you can do is look on in horror and whisper, “where in hell did that come from?” as the words fill your screen.

After a couple of emotional phone calls to friends and casting a circle of salt around my laptop just case it was actually possessed, the consensus seemed to be, just go with it. If you don’t like how it turns out, you can always start over. So I gave it a go. And what I ended up with was not the book I had intended to write but maybe something…well, I guess time will tell if it’s okay or not.

As far as I’m concerned I’m happy, the characters are happy, and the plot bunnies are already harassing me about what happens in the next installment. I’d give you hint but I don’t want to spoil it for you.

Although I’m fairly certain by the time I’m half-way through writing it, I’ll be looking back on this post and thinking, “Yup. Here we go again.” 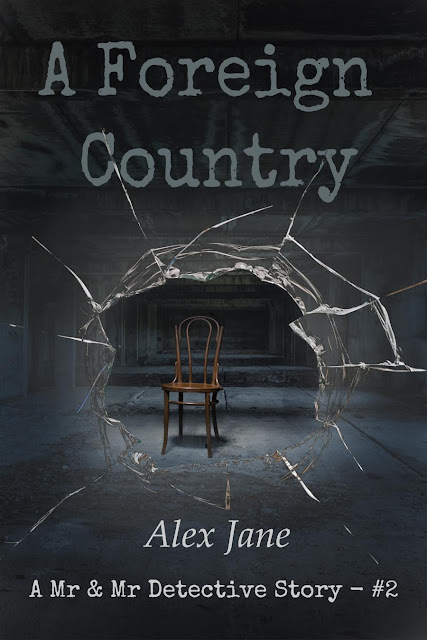 He loathes paperwork and could do without wasting his weekends catching out cheating spouses, but business is booming and he’s sharing his life with Jason, a man he’s still crazy about after three years.

The only downside is his lover’s baffling choice of friends and the fact that John is convinced Jason is keeping secrets from his dark past.

When a late-night phone call leads them to a kidnap victim with amnesia, and a dangerous man from Jason’s previous life suddenly resurfaces, they have much more than just secrets to deal with.

And after their mysterious house guest starts to show more than a passing interest in the detective couple, John is left struggling when his relationship, as well as his detecting skills, are put to the test.

Are they strong enough to resist the temptation of an enigmatic stranger?

Book Links
mybook.to/AForeignCountry
https://www.goodreads.com/book/show/46348415-a-foreign-country
A Foreign Country can be read as a standalone or you can get the first book in the series here  - mybook.to/Gazes

"You're so fucking beautiful," John whispered. "I can't believe I get to keep you."
"You'll be keeping Flat Stanley if you don't get off me, old man."
Jason squeaked when John pinched his side as he got up. Smiling down, John offered a hand and together they shuffled to the bathroom, laughing and teasing each other as they cleaned up and got ready for bed.
"You going to the gym tomorrow?" John sat on the bed, undoing the strap on his watch, as Jason pulled up his pillow ready to settle back and read for a while.
"Nah, I'm gonna skip it." He was going to add that Chris was working overtime so wouldn't be around much the following week, but his cell phone started bleating and vibrating over the top of the bedside table.
John turned slowly, his eyebrows raised. Normally, it was his phone going off at all hours. "Expecting a call?"
Jason frowned and shook his head. He was tempted to silence the call without even looking at who was disturbing his evening but curiosity got the better of him. But his curiosity didn't end when he saw the name on his screen.
"Everything okay?"
"Yeah." Jason had to swallow hard to get his voice to work. "Yeah, it's—I have to take this."
Giving John an apologetic look, and ignoring the scowl he got in reply, Jason pressed accept and lifted the phone to his ear as he struggled to his feet and limped from the room.
"Sean. Hi."
"Jesse. Thank god."
Jason frowned at that. Not so much the alias he'd used when he was back working as a bartender by night and freelance tech support who asked no questions during the day, but the fear in Sean's voice…that was unexpected.
"Are you okay, man? I got your message earlier but I was gonna call you tomorrow—"
"I'm—I'm so sorry to do this to you, I really am, but this can't wait until tomorrow."
"Jesus, Sean, what's going on? Are you all right?"
Sean laughed, sounding almost hysterical down the line. "No. No, I'm really not all right. I'm—I think I'm in really big trouble, Jesse. I heard you were working with a PI?"
Working was one way of putting it. "Jesus, man. If it's that bad maybe you should call the cops. I know a guy—"
"Christ, no! No police. Not just yet. Can you please just—can you come? Does your friend have a gun? No, forget that. I don't know what to do and I need to show—I need to talk to someone who'll understand."
A noise behind him caught Jason's attention. He turned to find John stood in the doorway, leaning against the doorjamb with his arms folded across his chest, arms that could have been circling Jason's chest as they drifted off to sleep together in a matter of minutes. John didn't look mad though. In fact, he looked about as curious as Jason felt about the whole situation.
Sighing, Jason nodded. "Okay. We'll come. Text me the address, okay?"
The relief coming through the phone was palpable. "Thank you, Jesse. Thank you so much. I'm—I'm sorry for dragging you into this but— Thank you."
Jason hung up the call, keeping his eyes on the phone as long as he could before he had to glance up and see John's reaction. Which was a quirked eyebrow and a twitching jaw.
"I take it that's the end to our relaxing evening?"
Jason blew out the breath he'd been holding. "Yeah. I'm sorry, I just—he was really freaked out, John. And being that the guy rarely emotes, I think something is really wrong."
"Is this the guy that left the message earlier?"
Jason nodded. "It just sounded as if he wanted to touch base so I thought I'd call him back tomorrow."
"Seems like he wants a little more than that." There was an edge to John's tone that made Jason tilt his head in disbelief.
"Oh my god, it's not like that." Jason shuddered at the thought. Not that Sean was a gargoyle or anything but after his first taste of John, he'd known he wouldn't be eating any place else for the foreseeable future. His cell twitched in his hand, the screen lighting up with a text.
"You know we could still crawl into bed? If we pull the covers over our heads, text messages don't count."
Jason laughed despite himself and checked the message. "He wants us to meet him…here?" Jason held up his phone, letting John read the address for himself. It wasn't the nicest of neighborhoods to be wandering around in after dark and begged the question of what the hell Sean would be doing there this time of night.
"You sure he's not trying to get you alone?" The words might have been barbed but John's delivery had softened. He sounded almost amused.
"He asked for you specifically, actually."
"Really?" John sounded surprised. "You think he's in trouble?" Jason nodded and John's face became serious. "Should I call Chris or Trey?" Jason was already shaking his head.
"He said no police. Which has me worried 'cause this guy is straight edge, law-abiding, dull as ditchwater."
John sighed and rubbed a hand across his face. When he started to turn away, Jason frowned. "Where are you—?"
"To get dressed," John said before he looked over his shoulder and smiled. "I think turning up in my underwear would probably make the wrong impression, don't you?"
"I don't know," Jason muttered as he followed him back into the bedroom. "Depends what kind of impression you're going for.” 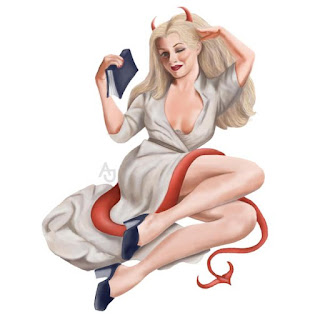 Bio
After spending far too long creating stories in her head, Alex finally plucked up the courage to write them down and realized it was quite fun seeing them on the page after all. Free from aspirations of literary greatness, Alex simply hopes to entertain by spinning a good yarn of love and life, wrapped up with a happy ending. Although, if her characters have to go through Hell to get there, she’s a-okay with that.
With only a dysfunctional taste in music and a one-eyed dog to otherwise fill her days, Alex writes and walks on the South Coast of England—even when her heart and spellcheck are in New York.


a Rafflecopter giveaway
Posted by Diverse Reader at 6:19 AM