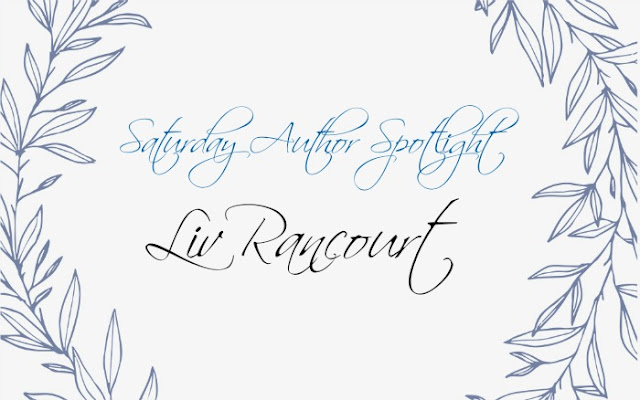 Liv Rancourt is a veteran in this genre and has written so many amazing books such as, Vespers and Aqua Follies, both which will view today. You'll often see her co-writing with Irene Preston. Today she's our Saturday Spotlight Author and I', so very happy to have her here.
As usual, we have an interview and we will view some of her books, and wrap it up with a giveaway. Get comfortable and enjoy. 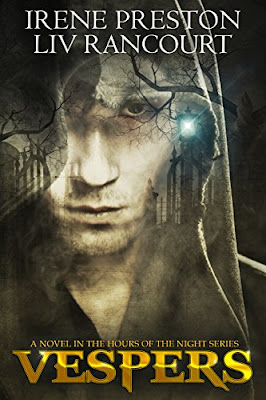 Thaddeus Dupont has had over eighty years to forget…

The vampire spends his nights chanting the Liturgy of the Hours and ruthlessly disciplines those unnatural urges he’s vowed never again to indulge. He is at the command of the White Monks, who summon him at will to destroy demons. In return, the monks provide for his sustenance and promise the return of his immortal soul.

The 22-year-old college grad just moved across the country to work for some recluse he can’t even find on the internet. Sounds sketchy, but the salary is awesome and he can’t afford to be picky.  On arrival he discovers a few details his contract neglected to mention, like the alligator-infested swamp, the demon attacks, and the nature of his employer’s “special diet”. A smart guy would leave, but after one look into Dupont’s mesmerizing eyes, Sarasija can’t seem to walk away. Too bad his boss expected “Sara” to be a girl.

Falling in love is hard at any age…

The vampire can’t fight his hungers forever, especially since Sara’s brought him light, laughter and a very masculine heat. After yielding to temptation, Thaddeus must make a choice.  Killing demons may save his soul, but keeping the faith will cost him his heart.

Vespers is a complete novel with no cliffhanger. It can be enjoyed as a standalone or read as the first book in the Hours of the Night series. 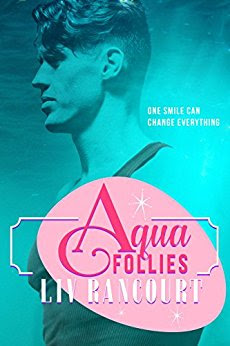 Russell tells himself he’ll marry Susie because it’s the right thing to do. His summer job coaching her water ballet team will give him plenty of opportunity to give her a ring. But on the team’s trip to the annual Aqua Follies, the joyful glide of a trumpet player’s solo hits Russell like a torpedo, blowing apart his carefully constructed plans.

From the orchestra pit, Skip watches Poseidon’s younger brother stalk along the pool deck. It never hurts to smile at a man, because sometimes good things can come of it. Once the last note has been played, Skip gives it a shot.

The tenuous connection forged by a simple smile leads to events that dismantle both their lives. Has the damage been done, or can they pick up the pieces together? 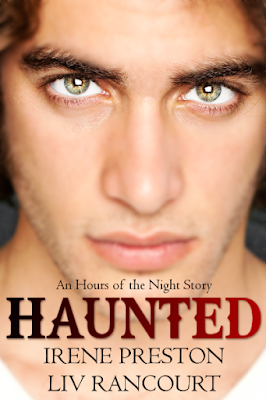 Noel Chandler had a good reason for leaving the L.A.P.D. for New Orleans, but when he walks into a burned out Garden District mansion, he discovers there are some things he can’t outrun. The spooks can find him anywhere.
As the resident historian for the cable show Haunts and Hoaxes, Professor Adam Morales keeps an open mind about the supernatural. Or that’s what he tells himself, until he meets a man who puts that principle to the test. Noel’s smart, sexy, and has killer cop instincts. One glance from his bedroom eyes has Adam ready to believe anything.
But is Noel haunted, crazy, or just another hoax?

Hi, Liv, it’s wonderful to have you back talking with us again. I always enjoy talking with you. You’ve been in the writing business for long enough to maybe know some inside tricks so I’m gonna pick your brain.

Thanks so much for having me, Mere! I’m happy to be here, so go ahead and hit me with questions.

The first thing I’d love to ask you is how do you deal with the pressures and demands of being an author?

Hmm…that’s a hard question for me to answer, because I don’t define my experience as “pressure”, exactly. I love telling stories, and I love the detailed process that goes into making a novel. For me, it’s mostly a matter of time management and discipline…because I’d spend all day on Facebook if I could. (lol!) Right before a new book comes out, I do have moments of “omg what if they hate it?!!!”, but I try to maintain perspective by reminding myself that being in a position to put my stories out there is a huge gift.

What is something you learned early on as an author that you keep with you even today?

Not everyone’s going to love my stuff. The same book can get a five-star review from one person and a one-star from someone else. The only thing I can control is what I put on the page, so I try to make my stories the best they can possibly be.

Are you attending any conferences or signings in 2018?

I’m going to be keeping it local this year. I’m planning on attending the Emerald City Writers Conference, put on by the Seattle chapter of RWA, and then I’ll also be attending Read with Pride Northwest in November. I hope to be teaching &/or speaking at both conferences, and I’ll also participating in the book sales.

You have a new book coming out with Irene Preston. Can you tell us anything about this?

Yes! I’m excited about Haunted! Irene and I will be participating in a Valentine’s Day giveaway, and although we’re “supposed” to be working on Benedictus, the next book in our Hours of the Night series, we decided to have some fun first. (I mean, it’s all fun, but Haunted is a little different than our usual stuff.) We’re still alternating points of view and there are still paranormal elements, but I set out to write the anti-Thad – so there are no somber, religious vampires in this one. The events in Haunted occur during Nocturne, but the closest our regular cast comes to a speaking part is a hard glare from Nohea. Readers who are familiar with our other stories will find lots of goodies, but new readers will have fun too!

How long have you and Irene co-written together and why do you think it works so well?

We started co-writing about a year and a half before Vespers was published, so June ’15 or thereabouts. She kept pestering me to write a vampire story, until I suggested *she* was the one who should write a vampire story. From there, we decided to write one together, but only as long as we were both having fun. That was two novels and two novellas ago, so…
I think we work because our strengths and weaknesses mesh really well. Our voices are complementary – readers can tell the difference between her sections and mine, but the overall impression is coherent. Also, the way we divide tasks happened naturally. For the most part, I get to do the stuff I like (blogging, making teasers, querying review sites) and she gets to do the stuff she likes (fiddling with the AMS ads and managing our accounts at various vendors). We’re still having fun, so I expect there are more books to come.

Have you ever wanted to co-author with anyone else and if so who?

I haven’t really thought about it. The relationship I have with Irene happened spontaneously, and I expect if I ever did agree to work with anyone else, it would be a case where opportunity knocks me upside the head and I have to say yes. There are a couple editors I’d love to work with, however, and a publisher or two…

When you’re in a slump, or suffering a block, what helps you out of it?

Before I started writing seriously, I was the cantor for the Saturday evening Mass at our church. Every week I had to prepare a Communion solo, whether I felt like singing or not. Some weeks were better than others (lol!) but I did learn to stay in the moment and create something independent of my mood, and I think I apply that lesson to writing. I’m rarely “blocked”, and if I find myself stuck, it’s usually because I’m taking the story in the wrong direction. I either work on something else or reroute things so I can keep moving.

Aside from your new book coming out what other things do you have planned for 2018 book wise?

Irene and I are planning to publish Benedictus (Hours of the Night Book 3) in September, and since we’re only about one scene in, we’ve got some work to do. I’m also playing with the sequel to The Clockwork Monk, a novella I make available for free to anyone who signs up for my mailing list. (Click HERE to find it!) Also, I’m editing my NaNoWriMo story – an m/m romance set in 1920 Paris – and hope my agent will be able to find a home for it.

Can you tell your readers and fans how they can follow you on social media?

Liv writes romance: m/f, m/m, and v/h, where the h is for human and the v is for vampire. Because love is love, even with fangs.
When Liv isn’t writing she takes care of tiny premature babies or teenagers, depending on whether she’s at work or at home. Her husband is a soul of patience, her kids are her pride and joy, and her dog’s cuteness is legendary. She can be found on-line at all hours of the day and night at her website (www.livrancourt.com) & blog (www.liv-rancourt.blogspot.com), on Facebook (www.facebook.com/liv.rancourt), or on Twitter (www.twitter.com/LivRancourt). For sneak peeks and previews and other assorted freebies, go HERE to sign up for her mailing list or join the Facebook page she shares with her writing partner Irene Preston, After Hours with Liv & Irene. Fun stuff!

Typing. I can’t write with a pen to save my life.

Liv will be gifting one person with a $10.00 Amazon
Gift Card and their choice of either the ebook Vespers or Aqua Folies.
Contest will end on February 2nd
Thank you!


a Rafflecopter giveaway
Posted by Diverse Reader at 6:35 AM