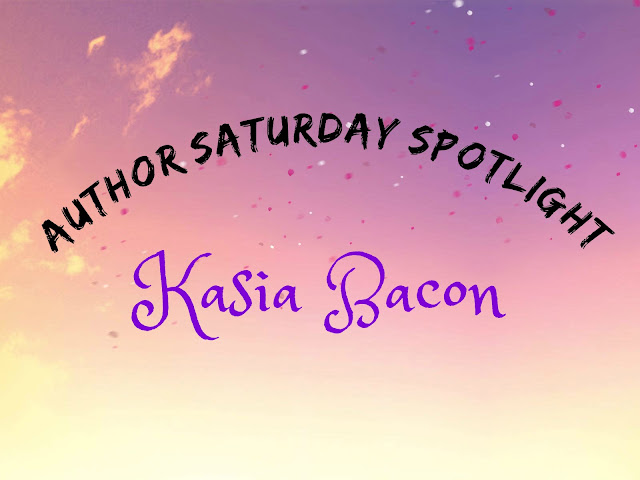 It's 2018 and Saturday Author Spotlight is back! It had been on hiatus for a few weeks and we are starting the new year with Kasia Bacon. Kasia is such an awesome person and a very talented author. She's written The Mutt, The Highlander ( Both books in that series were nominated for M/M Romance Members’ Choice Awards on Goodreads in two categories: The Mutt for Best Short Story (Under 50 Pages), and The Highlander for Best Fantasy.) Also, The Poison Within, and Blessing and Light. We are going to take a look at each of these books today. We also have an interview with the lady and we will wrap it up with a giveaway where three people walk away winners! So, grab your beverage of choice and hang with us. 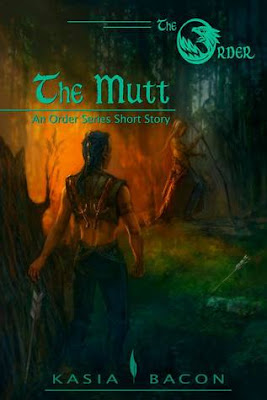 I, Ervyn Morryés of the Black Mountain clan, know all about control.

As the only fair-haired Dark Elf in the Highlands, I had to learn to control my fists and my temper in the face of derision.

To become the best archer amongst my peers, I had to learn to control my breathing and my movements.

But the day the half-breed called Lochan Féyes arrived at the training camp, my discipline faltered. Because—sweet gods—when I am around that aloof, blue-eyed assassin, my need is uncontrollable. 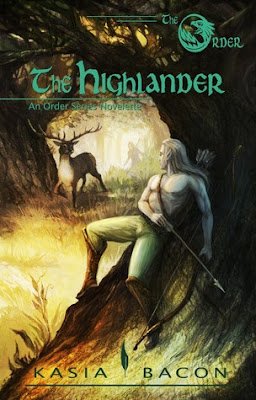 I, Lochan of the famed Féyes clan, know all about fighting.

As a half-breed Elf, I have struggled against prejudice and feelings of inadequacy.

A recluse by nature, I have battled my aversion to touch and interaction with others.

To become an assassin of The Order, I have learnt to overcome the limitations of my mind and body.

But denying the power Ervyn Morryés holds over me might be the one fight I lose. The truth is—damn it all—the relentless Highlander brings me to my knees. 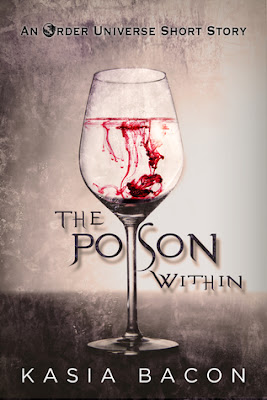 Black clouds of xenophobia gather over Radvadur, the western province of the Empire. The political climate is strained and fragile. A surge of Nymph refugees has stirred widespread hostility towards non-humans. When the investigation of a gruesome triple murder linked to the refugee camp ensues, it takes Inspector Käyru Skaer and his lover, Count Ellydhar Finn-Jánn, along an unusual path, at the end of which a precious gift awaits.

Käyru and Elly are worlds apart in social standing, but they have found common ground in the bedroom—up against the wall and the stable doors, too. The arrangement between them ought to have been temporary and of no consequence. As their circumstances change, will they find the courage to risk their hearts? 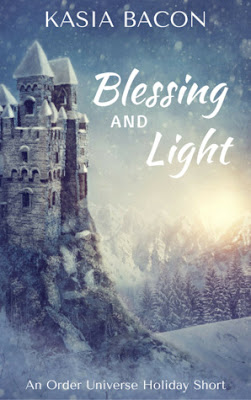 It’s the Night of Winter Lights.

Heedless of the holiday, the Commander of the H’Aren fortress, Captain Torýn Torhdhar, seems to find his satisfaction in work.

Such occurrence hardly surprises his Orderly, Sæbastyn Hyago, even though the young Lieutenant has spent a silent, aching decade wishing his superior officer would pursue pleasure elsewhere—specifically in his arms. But as the evening continues, nothing about it meets Sæbastyn’s expectations. Will the Lieutenant see his secret desires realised, or his heart shattered?

All of these books are available on AMAZON


Note from the author: Since the 14th December this story The Poison Within, also includes a short bonus read titled A Late Bite to Eat. 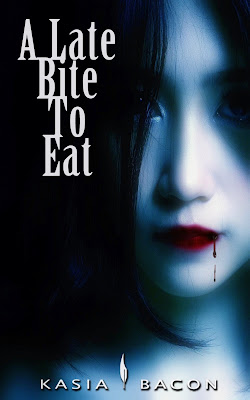 Thank you, Kasia, for being with me today and also being our first Spotlight of the New Year! I look forward to picking your brain a bit! So, get comfy.

Tell us some wonderful things that happened for you in 2017?

First of all, thank you for the invitation. It’s a pleasure to be on Diverse Reader.

Well, 2017 was a mixed bag for me, as I struggled with my health a bit. However, it was also a great year for travelling. Apart from a few quick European trips, I popped in to the U.S. to see what the fuss was all about (#KasiaInAmerica). I spent almost six weeks in the Midwest and NYC, hosted by a dear friend, and had a wicked time writing and watching fireflies. I admit to really liking America. I was lucky to have met the kindest people and the cutest animals. Just one thing: what the hell is up with the portion sizes? Frankly, they are ridiculous. Also, just for the record, I’m not a fan of AC blasting the life out of me. But your loos are the best in the world.

Another brilliant thing about last year was the fact that I published my first short story, The Mutt, followed by two novelettes, another short and two pieces of flash fic, all set in my Order Universe. I can’t even describe the exhilarating feeling of having my work out there and people reacting enthusiastically to it. I might be biased, but fantasy readers are simply the best sort ever. Seeing that people were interested in what I had to say gave me a confidence boost and the motivation to continue.

Where does your love of fantasy come from?

I binged on fantasy books and historicals in my formative years, and that left a deep mark. I’m an escapist who happens to be of the opinion that the world around us sucks quite a bit. I deal with ugly realism in my day job, which might partially explain my longing for something fantastical and my fondness for bygone times. In addition, I have an excessive imagination that bombards me with images that demand an outlet.

What has been the scariest part about publishing?

The thought that every single reader would hate my book with a passion and consider me a time-wasting imbecile? Apart from that, it’s a piece of cake. Everyone should do it at least once. Or, you know, for a thrill I suppose you could just jump out of an aeroplane instead.

In 2018, I’m hoping to release a paperback collection of stories. I can’t wait to hold a physical copy of my own book in my hands. Another endeavour would be to produce an audiobook of my Elven trilogy: The Mutt, The Highlander and The Scouts. And, of course, to conclude work on my novel, The Elven Vice.

I’m also planning to attend a couple of book conventions as an author: one in Amsterdam and one in Bristol. If I don’t chicken out, that is. I’m not a fan of huge events with hoards of people, given that I am social awkwardness incarnate. So wish me luck!

Do you have any authors that you tend to read when you’re looking for inspiration? Who?

Is there a subgenre you don’t think you’ll ever write and why?

A regular contemporary romance, most likely. I, um, just wouldn’t know where to start. The real world already exists. And what if I get something wrong? Nope, I can’t handle that level of responsibility. *laughs* It’s way easier to invent my own reality and rules, dammit. Frankly, contemporary reads have never been my favourite, and as a reader, I only reach for them if they are also mysteries or thrillers (like Josh Lanyon’s excellent books).

Would you like to co-write with an author and if so, who?

I can’t see myself co-writing with anyone, to be honest. My creative process is terribly messy and chaotic. I don’t write detailed outlines. I don’t plot meticulously. I’m an organic writer who changes things constantly and doesn’t write linearly. I’d drive any potential co-author up the wall in a snap. They’d end up despising me. Or stuffing me in a suitcase. Just ask my alpha reader. I don’t know how she tolerates me.

What advice would you give someone venturing out in the world of publishing?

Invest in a good quality vertical mouse. Stay determined. If you’re prone to snacking while writing, keep a bowl of cubed fresh fruit handy (along with some alcohol, perhaps, if you’re so inclined). Find someone you trust to give you objective feedback about your writing, and look for diverse beta readers.

What are you currently working on or what are your future projects?

I’m still fussing over The Scouts (The Order #3). I know, I know. It’s been delayed. *sighs* The last couple of months were a nightmare for me health wise. That’s my line of defence.

I’m halfway through writing When I First Saw Red (a standalone in The Order Universe)—the story of a red-haired whore with Incubi heritage and a Sergeant with the Imperial Army. It was originally written as a flash fic for Boy Meets Boy’s anniversary shenanigans, but readers wanted more, so somehow I got manoeuvred into continuing their story. *blinks* But all jokes aside, doing so was a no-brainer because I love those characters. The first chapter is available free here:

I’ve got four other stories stewing away on the back burners: a fated mates story featuring a cougar shifter; an arranged marriage tale; a story about a kidnapping; and one about a broody hunter and an adorable, untrained Mage.

Can you tell everyone where to follow you on social media?

If you wish to receive freebies, updates and learn about new releases, sign up for my mailing list.
My books are available in Kindle Unlimited, so you can check them out risk free if you’re a subscriber.

Favorite animal?
Cats, obviously. They give no f***s.

Odds or evens?
Err, I don’t really mind either way?

Okay, thank you, Kasia for hanging out with me. I can’t wait to see what you have in store for us in 2018.

Kasia is gifting THREE people Reader's Choice
The contest will end on January 12th
Thank you!


a Rafflecopter giveaway
Posted by Diverse Reader at 7:27 AM