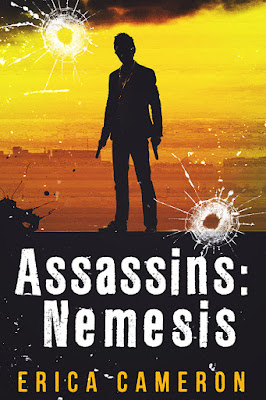 
Being orphaned and almost kidnapped in the space of a week sent Blake Marks into hiding. For months, Blake tries to help the Calvers—a family of vigilante bodyguards—investigate the people behind the hit on Blake’s father, Isaac, but then the safe house is compromised. Just as hired thugs storm the house to grab Blake, Daelan Calver dives into the fight, getting them both out alive.

Hiding isn’t an option anymore, but hit squads, under-the-table deals, and international espionage? Blake has no idea how to handle any of it, not even with Daelan’s family there to play teachers. The one thing Blake knows for sure is that there are only two options: keep up with the Calvers or get out of their way.

But even with the Calvers’ help and the glimmer of a possible future with Daelan giving Blake hope, chances of survival keep shrinking. The man who ordered the hit on Isaac may be dead, but his partner is viciously cold-blooded, and her plans could change the course of history. Blake wants to finish what Isaac started, but it’s looking like someone is going to die before this is over. And that someone might be Blake.

Wednesday, July 13 – 0500 India Time Zone
The vicious squall battered the Sea of Japan, roiling the waves and sending high winds screaming across the water. Those waves crashed against the shores of the small, isolated island sitting between Japan and the Korean Peninsula. Wind bent trees and displaced rocks on the island’s tall mountains.
Inside the Lyohwa Labs research facility on the northwestern edge of Etobih-lin, none of that could be heard. Especially not on sublevel two.
Lab six was a large, windowless room with a door that couldn’t be opened from the inside. Cameras in the corners were positioned to monitor everything, with no blind spots, but at this early hour of the morning, there didn’t seem to be much to watch. Only one woman—wearing a white, full-body, level A hazmat suit—was at work.
Hands braced on a backlit glass table, she stared through her faceplate at the rack of glass vials in front of her, furrows across her forehead. The vials seemed to glow with the light from the table, and the intensely green liquid was vibrant in the otherwise stark white and stainless steel room. Though her gaze jumped between the vials and the tools laid out in front of her, she ignored the alerts popping up on the wall-mounted screen to her left and the beeps of the various machines, all of them labeled LyoLabs.
“They’ll kill you if this works.” The words were quiet, but the distortion of her breathing apparatus gave them an ominous rasp. “Whatever. At least you won’t be here anymore, right?”
However cavalier the words seemed, her hands shook when she straightened and tried to lift a vial out of the rack with a pair of tongs. She took a deep breath, the sound made mechanical by her respirator. Her hands steadied. After lifting it clear of the rack, she turned and placed it in another on the epoxy resin workspace behind her.
Slowly, carefully, she extracted a small amount of the green liquid with a pipette and placed three drops into the brown mixture simmering in a beaker over a lit Bunsen burner. The color shifted as the bright drops swirled and dissolved into the bubbling liquid. From a vacuum-sealed jar on the table, she measured out 0.03 milligrams of an extremely fine powder. When she added it to the beaker, lines of dark blue spread through the mixture like ink, but when she stirred it with a thin glass rod, the solution cleared.
“Almost there.”
Another alert buzzed through the computer’s speakers. The tone was lower—a grating sound meant to draw attention—but she didn’t spare the screen more than a cursory glance.
The door behind her opened; the hiss of the airtight seal releasing would’ve made that obvious even if the door’s handle hadn’t clicked as it lowered and announced company.
A leanly muscled, olive-skinned guy wearing a LyoLabs security uniform walked into the room, a Colt handgun in his hand. He kept it pointed at the floor.
“I don’t care how impatient you are,” she said without turning around. “There is no possible way for me to make these machines work any faster. Either shoot me, or let me get back to my work.”
“Adila?”
“Who else?” she muttered. “It’s not like you assholes let me have assistants anymore.”
He stopped at the wall display that had been flashing a red alert box. When he saw what was written there in bold black-and-white Korean letters, he cursed. When he crossed the room, his footsteps were heavy and quick. “Adila, we have to go. Now.”
“Go. Stay. Come. Work. I’m not a goddamn dog!” She slammed her hand down. The stirring rod clenched in her fist shattered when it hit the countertop. Releasing the broken pieces, she turned. “If you want me to figure this out, leave me alone and let me— Who are you?”
Though the gun-wielding newcomer was dressed as a guard, he looked like he might be twenty at the oldest. He seemed too young to be working there, but his dark eyes searched the room with purpose, and he held his Colt like someone with decades of experience shooting it.
“I’m your ticket out of here if you follow me,” he said. “But the offer won’t be worth anything in about four and a half minutes.”
Adila hesitated only a moment. In a burst of motion, she grabbed a flash drive and jammed it into one of the computers, activating a command to back up the data.
“Time is running out,” the guy warned. “Is that info worth our lives?”
“It’s worth a hell of a lot more than that.” Adila dumped the clear liquid from the bubbling beaker into the sink, then filled the beaker with a solution from a large bottle next to the sink, and poured the rest of the bottle’s contents and all of the green-filled vials down the drain. When the computer flashed Backup Complete, she ejected the flash drive and pressed it into her rescuer’s hand.
After executing a command to format the computer and wipe the drive clean, Adila followed the stranger out of the lab, slowly stripping the hazmat suit as she walked, dropping the pieces behind her.
As the suit fell away, the body underneath it became visible—and the scars that body wore. Old, healed burns from pinky finger to elbow up the side of her left arm. A misshapen bump on her nose that might’ve been a badly treated break. Thin lines were almost hidden in the natural creases of her neck, but they were too pale against her tan skin to disappear completely.
“Annyeong, fuckers,” she said as the door shut behind them.

To celebrate the release of Assassins: Nemesis, one lucky winner will receive $30 in Riptide Publishing credit! Leave a comment with your contact info to enter the contest. Entries close at midnight, Eastern time, on January 14, 2017. Contest is NOT restricted to U.S. entries. Thanks for following the tour, and don’t forget to leave your contact info!

Posted by Diverse Reader at 1:06 PM