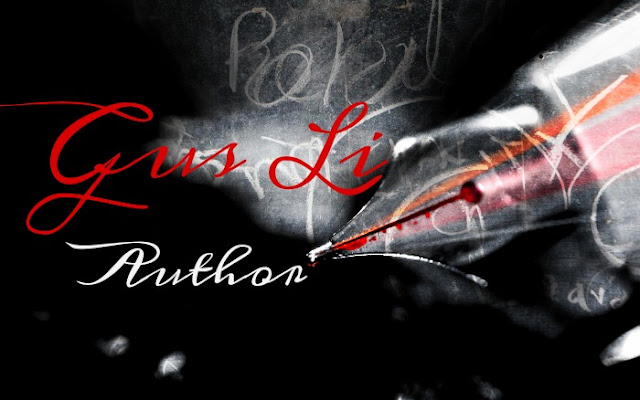 It's not often even I have a new-to-me author as my Saturday Author Spotlight but alas, here we are! Gus Li is just that. After perusing all of Gus's books I was truly fascinated. After the interview I was amazed. Gus is brilliant, talented, and an absolute must read by all! I'll show you some of Gus's work, there's an interview, and of course an AMMMMMMMMMAZING giveaway you won't want to miss. So get comfy, grab a drink, and we will begin. 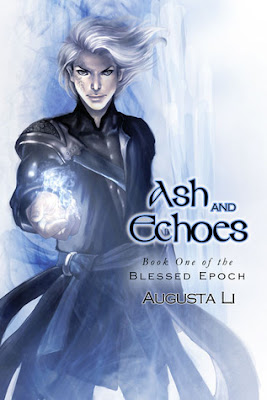 Book One of the Blessed Epoch

For the past few years Yarroway L’Estrella has lived in exile, gathering arcane power. But that power came at a price, and he carries the scars to prove it. Now he must do his duty: his uncle, the king, needs him to escort Prince Garith to his wedding, a union that will create an alliance between the two strongest countries in the known world. But Yarrow isn’t the prince’s only guard. A whole company of knights is assigned to the mission, and Yarrow’s not sure he trusts their leader.

Knight Duncan Purefroy isn’t sure he trusts Yarrow either, but after a bizarre occurrence during their travels, they have no choice but to work together—especially since the incident also reveals a disturbing secret, one that might threaten the entire kingdom.

The precarious alliance is strained further when a third member joins the cause for reasons of his own—reasons that may not be in the best interests of the prince or the kingdom. With enemies at every turn, no one left to trust, and the dark power within Yarrow pulling dangerously away from his control, the fragile bond the three of them have built may be all that stands between them and destruction. 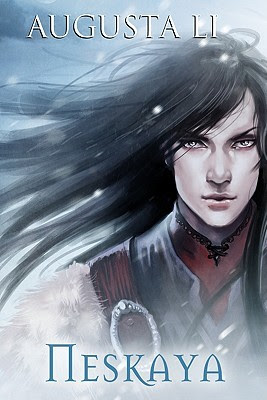 Every nine years, on the winter solstice, Prince Neskaya's people conduct a ritual called the Midvinterblot, sacrificing nine horses, nine bulls, nine hogs, and nine men in the hopes of the return of light and fertility. With crops failing for the third year in a row, the sacrifice to win back the gods' favor is especially important. But the gods are demanding more than the usual tribute: they demand the life of the king's only son, Neskaya.

Lars, Neskaya's best friend and secret lover, is willing to fight for the life of the man he loves, despite Neskaya's odd complacency. Lars has no choice but to seek supernatural aid to save him, and he'll have to somehow convince Neskaya to fight beside him against the entire hungry village if they are to have any chance to survive. 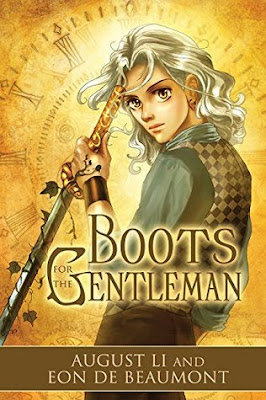 Steamcraft and Sorcery: Book One

Hired by a mysterious faerie gentleman to steal seemingly worthless artifacts, Querrilous Knotte is seen as a traitor by the humans of Halcyon. But as long as he’s getting paid, Querry doesn’t mind. When his client makes a cryptic comment about a certain house, Querry contacts his old flame Reg—a former street rat who now works in the Royal Archives—to learn if the property contains anything of value.

Though Reg has no answers for him, Querry learns there is indeed something precious in the house, something Reg is convinced will bring nothing but trouble. The armed guards that attack the thief prove Reg’s prediction true, and he can’t leave Querry to face it all alone. Not when Reg’s feelings for the man may not be as extinct as he'd thought.

The trouble is, Querry's heart doesn’t just belong to Reg anymore, and surprisingly, Reg’s heart no longer belongs only to Querry. In the end, it may not even matter, because if Querry, Reg, and their hearts’ desire can’t stop Lord Thimbleroy from draining Halcyon’s magic, they won’t live long enough to regret their unresolved romance.

Hey there, Gus! Thank you so very much for being here today as the Saturday Author Spotlight. I have actually never had the opportunity to speak with you so this is really exciting! I love meeting and talking to new authors… Well, new to me! So I’m going to harass you for a bit. Poke inside that brain of yours. Let’s start.

I noticed you write under Gus Li and Augusta Li. Is there a reason you do this? I know many authors do it when they are genre hopping I’m curious about you?

The reason for the difference is that when I came out as transgender a few years ago, my publisher, Dreamspinner Press, offered to go back and redo all the covers of the books I have with them. I thought it was a wonderfully supportive gesture, and so of course I said yes. They really went above and beyond to make me feel comfortable, and it meant a lot. There are just some old copies still floating around with my previous name on them.

There’s magic to your writing… literally. What is it that intrigues you about magic and fantasy?

Well, the quick and easy answer is that it’s fun—it’s fun to create belief systems, cultures, and dig into the mechanics how things work and what can and can’t be done. It also presents an interesting challenge to a creator because I always strive for balance in my work, and the trap that magic can lure you into is making characters who are so powerful that eventually nothing they face is a challenge. Rather than throwing bigger and bigger enemies at them, I like to find internal flaws to balance their power, or some sort of price for wielding it.


The other benefit to the genre is that it can hold a mirror to our own society but with a little comfortable distance. I like exploring the aspects of power, politics, and human nature that are universal.

If you could possess any power what would you want to have and why?

I thought about this for literally days, weighing the pros and cons of so many different abilities. What I would really want to do is be able to fight against fascists and tyrants so everyone can be left alone to live in peace. I’d like to be able to put a permanent (yep, permanent) stop to sick people hunting foxes or hurting animals. I’d like to put an end to greedy people who are willing to destroy the planet we all live on. So really whatever—Superman’s powers, magic, dragons, an Iron Man suit.

Who are your writing inspirations?

I have to make a distinction between work I respect and work I find entertaining. English was one of my college majors, so I encountered a lot of literature I respected—that I learned a lot from—but not that I would necessarily want to read again. Then there are genre books that are massively enjoyable but not especially innovative or technically perfect. I guess if there’s something I aspire to, it’s to be among those works that manage to occupy both areas at once, authors like Susanna Clarke, Neil Gaiman, Alan Moore, Ursula Le Guin, Mary Renault, William Gibson, Isaac Asimov, Elizabeth Moon, Tolkien…. This could become a long list.

You’re a video game enthusiast too! So, I really want to know some of your favorite video games and which ones really influence your writing?

I actually try not to let them influence my writing too much, LOL. Though one thing I do like, and feel is applicable even to contemporary realism, is party dynamics—the way people’s strengths, weaknesses, and personalities play off each other. After all, characters interacting is pretty much the basis of all fiction in my mind. Picking which people to put together to get to the point I want to get is something I take from gaming.


Not surprisingly probably, I like games with a lot of story and especially ones where the player gets to influence that storyline. My all-time favorite games are Shin Megami Tensei: Persona (especially 3 and 4, and 3 will always hold a place in my heart), SMT Devil Summoner, the Tales of… series of games by Bandai, Fire Emblem, Kingdom Hearts of course. Bioware games like Mass Effect and Dragon Age are very good, as are Bethesda series Like Fallout and Elder Scrolls. I get bored pretty fast if I am not invested in my characters and mission, so I don’t play many FPSs, though for some reason I loved Soul Calibur 4, made like a dozen fighters, and put hundreds of hours into it. It certainly didn’t hurt that the game is pretty

The world is a scary place right now. It’s so hard for so many to find hope and cling to it. Any advice or words of wisdom you can share with this genre?

Don’t turn a blind eye to injustice. Stand up for people when they need it. I think it’s a good idea for all of us to be ready to defend and protect ourselves the best we can in case the time comes when we cannot depend on… others… to have our best interests at heart. I am a big advocate of martial arts and everyone being able to defend him or herself. My best advice to everyone s to get all the training you can. Even if you never have to use it—hopefully that will be the case—hey, it’s great for fitness, confidence, and making friends.

Can you tell us what you’re currently working on and/or what you have planned for the future?

I’m currently wrapping up a modern-day sort of realistic fantasy/dystopian/cyberpunk mashup thingy, as yet untitled. I really want to write down the sequel to Fox-Hat and Neko, which is mostly finished in my head. Fox-Hat and Neko was the “summer” entry in that series, and this next will be the autumn, so it’ll be a bit more somber, exploring the concepts of Fate and how to deal with things ending. It will be set in a rural farming community in decline in Aomori Prefecture. I need to finish Blessed Epoch, which means two more books, and I would like to do more drawing and experiment with mixing visual and written mediums.

Favorite dessert?
Sour gummy worms or any sour gummy candy
Favorite color?
Orange
Movies or TV?
Both? Either? It depends. I like the X-Files, Star Trek, anime, documentaries about history, nature, and weapons, Harry Potter, Miyazaki, some superhero movies (Deadpool <3), Dr. Who, etc. That kind of stuff.
Kindle or Nook?
I don’t have either. I have an iPhone and a MacBook.
Cat or dog?
Three cats currently. My lifelong dream is to care for a rescue fox. I adore foxes.
Day or night?
They both have advantages. I am nocturnal though I try not to be. Even when I try to be active during the day, I slowly slip back into staying up—and waking up—later and later.
Favorite smell?
Pine or the ocean
Favorite season?
Everything but winter. Though where I live now we don’t really have winter.

Okay, Gus, that’s all the torture for today. Thank you so very much for being here!

Gus is giving away the first three Blessed Epoch books, paperback, signed. Will post anywhere, but if it is outside of the States, it might take some time. 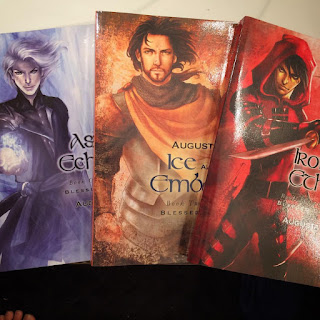 This contest will end on December 9th!

Thank you to Gus for being here today.

a Rafflecopter giveaway
Posted by Diverse Reader at 6:24 AM