Blog Tour: Once Upon a Time in the Weird West Anthology~ Guest Post Tali Spencer #Giveaway

Diverse Reader is happy to have Tali Spencer here today for the Once Upon a Time in the Weird West Blog Tour. This is an anthology with stories from Tali, of course, and many other talented authors! Enjoy the post, the book info, and the amazing giveaway!! 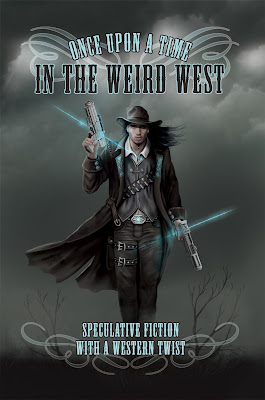 Book: Once Upon a Time in the Weird West

This isn’t the same old Wild West. The usual suspects are all present: cowboys, outlaws, and sheriffs. There’s plenty of dust, tumbleweeds, horses, and cattle on the range, but there are also magical gems, automatons, elementals, airships… even dinosaurs and genetically modified insects. Roaming among the buffalo and coyotes, you’ll encounter skinwalkers, mad engineers, mythical beings cloaked in darkness, and lovers who stay true to their oaths… even beyond the grave. On this frontier are those at the mercy of their own elaborate devices as well as men whose control of time and space provides a present-day vision of the West. There might even be a dragon hidden amongst the ghost towns and wagon trains.
If you like your Westerns with a splash of magic, a touch of steampunk, and plenty of passionate romance between men, these genre-bending tales will exceed expectations.
Hold on to your hats, cowboys and cowgirls. The West is about to get weird, and you’re in for a hell of a ride.


Short Story Title: After the Wind 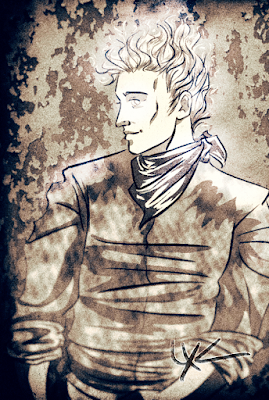 In my Weird West story, “After the Wind,” cowboy Micah Dawes reflects on having sex with other people. “I burn mattresses with my wet dreams, so I’ve been real careful with humans. It’s a sad state of affairs,” he says at one point. You see, Micah is a fire elemental. And being a fire-head presents special problems when taking a lover to bed.


In the 1860’s Wild West of “After the Wind,” a supernatural catastrophe killed a lot of people and gave the survivors elemental abilities. Micah’s eyes and hair glow like hot coals, and he also creates and commands Fire. Other weirdlings, as elementals are called, have powers over Air, Earth, and Water.

Another character in the story, Berto, is an Air elemental. Micah is drawn to him. Trouble is, as Micah again puts it: Fire and Air tend to blow things up.

Sex between weirdlings involves their elements as well as their bodies. Elementals release their element in a variety of ways. Losing control during sex is definitely one of these. Air feeds Fire, so if both lovers lose control they burn down the bed, or the house. They might also damage each other. Micah’s ejaculate contains fire. His body (and semen) is immune to fire, of course—but his lovers are not so gifted. Berto, being Air, might die if Micah came inside him.

Berto is more compatible with his lover, Win Wilson, an Earth elemental. Earth is the least volatile element. Win anchors Berto physically when orgasm creates a kind of love devil that literally blows him away. Berto doesn’t need to hold back when with Win.

When Micah finds Rain, whose element is Water, his cowboy heart is hopeful. He wants to save Rain from evil poachers who hold the young man captive—but he also hopes they might become lovers. Water swallows Fire.

I kissed every part of him that could be gotten at there in the well-house. He even opened some of his shirt buttons, probably fearing I’d rip them off. He was perfect, beautiful, a fluid and giving body unlike any I’d ever known. It was like tasting freedom because I didn’t have to fear burning him, not with so much water near. A fire weirdling letting go is a danger. I could leave Rain unscathed, given his power, and still burn the well house down.

Many dangers fill the world of “After the Wind.” Elementals frighten regular humans, who still outnumber them and have placed Dead or Alive bounties on their heads. Sex adds a level of complication. When Rain comes, the skies open and drenches towns with the source of his name. Micah must consider his element when choosing a partner. Air seeks Earth or Water. Fire seeks Water or Earth. Water needs someone who will ignore wet sheets. Earth’s bed might sprout new growth. Air’s partner must be comfortable with possibly levitating.

But the sex can be mighty explosive!

Check out all the stories in the Once Upon a Time in the Weird West anthology. It’s a great collection!


Buy Links (Up for preorder now)

After the Wind Blurb
Tali Spencer's story in the anthology

Plagued by drought and raids from hostile Comanches, the West Texas frontier is a hell of a place to carve out a living. Twenty years ago, a mysterious disaster devastated the Llano Estacado and cursed the survivors with supernatural abilities over Fire, Air, Water, and Earth. The Anglo government promptly outlawed these powers—and they’re willing to pay good money to anyone who turns over an elemental, dead or alive.
When rancher Micah Dawes desperately needs water for his herd, he strikes a deal with two unsavory bounty hunters for the services of a chained, blue-haired water elemental named Rain. Micah pities Rain, but he has to play his cards close to his chest—because Micah, too, survived the Wind, and the reason he always wears a hat is to hide his glowing red hair….

Tali Spencer delights in erotic fantasy and adventure, creating worlds where she can explore the heights and shadows of sexual passion. A hopeful romantic and lover of all things exotic, she also writes high fantasy and science fiction. If you would like to see inspiration pictures for her characters, or glimpse how she envisions her worlds, check out her Pinterest boards.
Tali’s books include the Pride of Uttor books: Captive Heart, Dangerous Beauty, Adored, and Victory Portrait, all with Resplendence. Her gay male high fantasy stories, Thick as Thieves, Sorcerer’s Knot, and The Prince of Winds, are published by Dreamspinner Press. Her light-hearted contemporary, The Last Cannoli, is a Goodreads free read. She often publishes in anthologies, and puts up free stories and excerpts on her blog.
Social Media links
Website: http://talismania-brilliantdisguise.blogspot.com/
Facebook: http://www.facebook.com/tali.spencer
Twitter: @tali_spencer
Pinterest: http://pinterest.com/talispencer/


a Rafflecopter giveaway
Posted by Diverse Reader at 8:16 AM