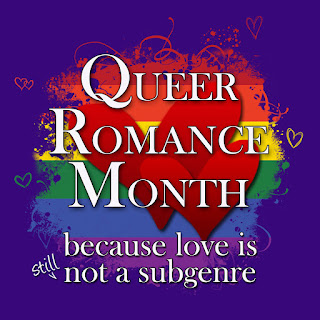 This mini-interview with one of our contributors is brought to you in support of Queer Romance Month.

QRM runs throughout October, celebrating love stories in all shades of the rainbow in all shades of romance. Join us, and over a hundred LGBTQ+ authors and allies, for essays, flash-fiction and much, much more.

KC: Oh, that will have to be an At The Moment answer! My favorite queer romance at the moment is between Hannibal Lecter and Will Graham. Yeah, I know. Messed up, but in all the right ways. In the beginning, the showrunners of NBC Hannibal were all about the bromance and platonic love between Hannibal and Will. Then the show was cancelled, and I think maybe they just said screw it and threw all that out the window, stopped tip-toeing around what was obvious from the beginning. From there, it was just plain love between them and no one connected with the show bothered to dispute it anymore. And that was kind of a neat thing; to see where creativity leads the artists when money and advertisements are no longer connected with vision. They led to a truer path, one that I think defines the relationship they were portraying in much clearer terms than the elusive and mainstream-acceptable “bromance”.

2. What about non-queer romances? Do you have a favorite couple?

KC: Absolutely, it’s Carol Peletier and Daryl Dixon. I don’t even have to say they’re from The Walking Dead, do I?  I think the whole world knows that, but who Daryl might be in love with is a legendary question mark. There are so many speculations, so many pairings that have an equal chance of happening with him, just because of how deep that character runs. The character of Daryl is a beautiful construct of conflictions and reactions, more so because he’s actually a little in love with everyone he’s close to, all his friends. And Carol starkly represents so much of humanity, failings and virtues alike, so when you put these two together they become even more than that. They become a spectrum of humanity entire. I don’t know if you can call it the great romance of our times or anything, but definitely they’re my personal favorites.

3. Can you tell us a little bit about your own writing?

KC: I like to write in different genres, but I will never write a story that does not include a LGBTQ character. It’s always seemed weird to me to read a book that contains no gay characters. It’s like: who are these people? Where do they live? How can they be living in a place where absolutely everyone they know is a cis-bodied heterosexual? It’s never made any sense to me. It’s deliberately unrealistic and I’m not buying it anymore. Just not. If every character in all your writing—or reading, for that matter—is white, straight, and cis-gendered, that displays tunnel-vision of a very dismaying kind. It has nothing to do with imagination or talent and everything to do with authors making a choice NOT to see the human beings around them. Fiction is still supposed to represent truth in some form, but you can’t claim that with any honesty if your personal truth is monochrome.

4. Do you have a favorite queer romance couple in movies?

I do, I do! Pike Dexter and Henry Hart in Big Eden. I still say it’s the sweetest romance I’ve seen to date. A small movie that leaves a big, big impression.

Kirby’s contribution to Queer Romance Month – “Happily Ever After In Queer Romance” - will be published on 19th October.

“Some argue that HEA in m/m and gay romance is not true to life [but] vampires aren’t realistic. Werewolves, angels, ghosts, elves, mages, aliens, zombies, urban apocalypse... the list of unrealistic creatures and scenarios we accept in order to enjoy a story are endless.”
--Kirby Crow 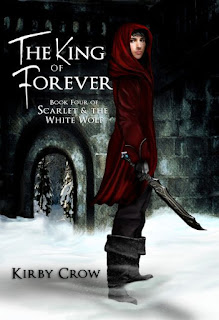 About the King of Forever
The sun has returned to the Land of Night and Liall has claimed a throne he never wanted, but many still oppose the presence of his beloved Scarlet at court. While the powerful barons clamor for a royal heir to secure the succession, rumors fly of Liall's marriage to a baron's daughter, driving a painful wedge between the lovers.

But the proposed marriage of Lady Ressilka isn't the only reason Scarlet has grown distant. His magic is changing, mutating into a dangerous power he does not understand, and the only people who might be able to help him control it are the Ancients, who once tried to murder him.

When the borders of Rshan are threatened and war looms, Liall agrees to a forbidden pact to save Scarlet, but the bargain may cost the Wolf his life. 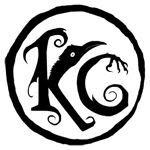 About Kirby
Kirby Crow worked as an entertainment editor and ghostwriter for several years before happily giving it up to bake brownies, read yaoi, play video games, and write her own novels. Whenever she isn't slaying Orcs or flying a battleship for the glory of the Amarr Empire, she can be found in the kitchen, her vegetable garden, or at the keyboard, tapping away at her next book.

Kirby is a winner of the EPIC Award and the Rainbow Award. She is the author of the bestselling "Scarlet and the White Wolf" series of fantasy novels.
Website • Tumblr • Twitter

Posted by Diverse Reader at 1:01 PM