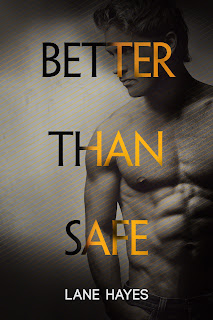 Blurb: Paul Fallon is a fashion advertising guru. He’s a genius at dealing with difficult editors, art directors, and designers alike. He thrives on the chaotic atmosphere and constant challenges. But in his personal life, he’s hoping for peace and stability. Settling down with a nice doctor or lawyer sounds perfect. Anyone but an artist. He’s been there, done that, and he doesn’t want to relive the heartache.

Seth Landau is a model, occasional guitarist, and aspiring painter. He’s quirky, flighty, and wise beyond his years. Life has taught him some tough lessons, then given him opportunities he never dreamed of. He’s learned to appreciate the fragility of life and to express it in his work. Seth’s flare for the absurd combined with a supple mind and a beautiful body are too alluring for Paul to ignore. Against his best intentions, Paul is drawn to the younger man whose particular brand of crazy challenges Paul to accept that things aren’t always as they seem. Sometimes taking a chance is better than being safe.

My stomach growled. I was dead tired, hungry, and more than a little confused. Seth turned the corner before my brain could catalogue any further complaints. I studied his casual attire as he came closer. Worn black jeans, a white T-shirt with paint stains, and an unbuttoned black and blue striped cardigan. He looked more like a wacky artist than a sophisticated couture model, I mused. His sharp features were undeniably attractive but it seemed as though he’d chosen the basic clothing to downplay his beauty. Or maybe he’d just painted and couldn’t be bothered. There was something ridiculously appealing to me about our very opposite looks. Corporate formal versus art student chic. I glanced down at the sushi and willed my dick to behave.

“There you are. What kind of pasta do you want? I don’t have time to make it myself, but don’t worry, I’m buying pre-packaged but fresh. Your choices are spaghetti, tagliatelle, or pappardelle.”

I looked at the three choices he held up and pointed to the one in the middle. The tagliatelle.

“Really? I was thinking basic spaghetti but—”

“I want your opinion. If you want the tagliatelle, we’ll get that one. Done.”

“Seth. Get the spaghetti. I’m not bothered.”

“What do you mean by not bothered?”

“I mean….” I took a step forward so we stood toe to toe, Italian loafer to dirty white trainer and gave him a pointed glare. “I don’t give a shit. Pasta is pasta. It doesn’t matter to me what shape it comes in. At all.”

“What tipped you off?”

“Sarcastic and cranky. Let’s go. You need food.” He turned away, carrying his basket of goods toward the front registers.

“What about wine?” I called after him.

He stopped in the middle of the aisle and curled his finger, motioning me to come to him with a devilish grin on his handsome face. I complied. We were alone for the moment, surrounded on either side of the cramped space by white bread and a variety of colorful cereals chock-full of preservatives and food dyes. I eyed him warily, wondering why he was stalling.

“I told you I have wine. Good wine too.”

I rolled my eyes. “Of course there is. What is it? You need to swing by the dry cleaners first or—”

“Why is it so crazy?” he asked innocently.

“Here are a couple reasons. One, we’re in the middle of a market in a family oriented part of town and two, we’re barely friends. Not lovers. Friends don’t kiss.”

He grinned. “Sure they do. What they probably don’t do is say something like, ‘you look so fucking hot in that suit, I wish I could take it off you right here next to the Cheerios and Wheat Chex,’ so I won’t go there, but I still think it’s okay to kiss.”

I stared at him with my mouth wide open, unable to find my voice. When he chuckled in amusement at my expense, I acted with uncharacteristic impulse and reached out to cup his neck and draw him close to me. He gasped in surprise at the quick movement. I smiled as our noses brushed, perversely pleased by his shock, and suddenly glad to be the one pushing him one step further. I licked his bottom lip before fusing my mouth over his in a swift but passionate kiss. I backed up with a grin and sauntered away, taking care he didn’t see me adjust my trousers as I moved with purpose to the front registers.

I set my bag of tomatoes on the conveyer belt and stepped aside when Seth joined me a moment later.

“You play dirty,” he muttered as he set the contents in his basket with mine.

“Maybe I did. Beware. I can play dirty too.”

I bit my cheek hard and turned toward the rack of magazines nearby, hoping to diffuse the sexual tension racing through my body. Stress, exhaustion, and hunger were suddenly non-issues. All I wanted now was sex. The one thing I couldn’t have with this man. Not without risking more than I was willing.

~ In Better Than Safe, Seth is a creative sort of creature. One thing he does amazingly is paint. What research did you do for this or was this something you had firsthand knowledge of?

I love art! Museums are one of my favorite places to visit, second only to libraries.  I’ve taken a few painting classes but I don’t have any real talent. I’m more like Paul in that I appreciate fine art.  I’ve taken numerous art history classes over the years and though I am by no means an expert, I know enough to hold my own in any conversation regarding expressionism versus impressionism or abstract art versus contemporary. Let’s put it this way, my daughter is taking an Honors Art History class right now and I’m very jealous! (Art geek!)

~ Aaron is sort of the sun in this series and all the other characters are planets that orbit around him. Was this always how it was set to be or did it just sort of happen?

LOL! I love that expression! I didn’t intend to make one character more central than any other but I admit, I have a soft spot for Aaron too.  He is sunshine. He’s positive without being a Pollyanna.  And he’s smart.  I think readers will enjoy reconnecting with Aaron, Matt and all the boys in Better Than Safe.

~ Is there more to this series or is Better Than safe the last one? *sniff sniff*

There will be at least one more short story.*passes tissue… I have a feeling fans of Better Than Good will know what that story should be about once they finish Better Than Safe. *wink!

~ Did you plan out this series or were you just as surprised as we were to see you give Paul his own story?

The answer is… a little of both. I’m a lose planner. I have a general idea where a story is going and I do my best to stay on track, but sometimes these guys take on a life of their own! At that point, it’s up to me to pay attention and go with the flow. I knew I’d come back to Paul for a couple reasons. I felt like there was more to say and I wasn’t ready to let go of the DC crew.  I’ve worked it so that Better Than is a bridge to my next series.  There is one crossover character from Better Than Safe who really needed his own story and this was the perfect way to visit with beloved characters and meet someone new. And amazing!  Look for book #1 in January!

Thank you for having me on your blog today!

Paul and Seth… what is there to say? How about, OMG ALL THE FABULOUS! Seriously, this series hasn’t faulted yet. Each is spot on and crisp. Each character’s slight complexity is relatable and the execution of every situation is flawless. Seth is an artist in every way. Body, heart, mind, soul. Paul is not fond of the whole artist thing. But this story shows what we perceive as toxic for ourselves sometimes is our salve. As usual, Lane had me in tears. My bottom lip is all chapped from worrying it and I’m tired because I couldn’t put the book down until everything was okay. This series is out of the park good! I love all her MC’s and with each passing book I never tire of any of them. I love how she incorporates them into each book. None are forgotten. Huge praise on that. Too often in a series we don’t get to see our favorites anymore. This is not the case with this book or any of them. Bravo, Lane. Keep writing and I’ll keep reading!

Lane Hayes is grateful to finally be doing what she loves best. Writing full time! It’s no secret Lane loves a good romance novel. An avid reader from an early age, she has always been drawn to a well-told love story with beautifully written characters. These days she prefers the leading roles both be men! Lane discovered the M/M genre a few years ago and was instantly hooked. Her first novel was a finalist in the 2013 Rainbow Awards and her third received an Honorable Mention in the 2014 Rainbow Awards. She loves travel, chocolate, and wine (in no particular order). Lane lives in Southern California with her amazing husband and the coolest yellow lab ever in an almost empty nest.

Runner Up Prize: Ebook copy of any one title from author’s backlog

October 6 - The Land of Make Believe


October 16 - Rainbow Gold Reviews
Posted by Diverse Reader at 4:49 AM