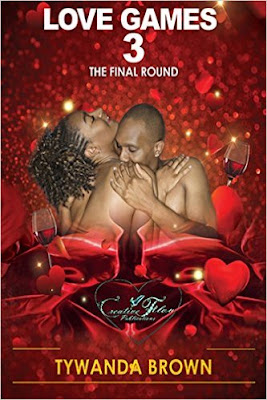 Synopsis
Buckle up your seatbelt and prepare to travel back to Newberry SC for the final round of the Game called Love. With players permanently eliminated from the games, it caused the rules to change. With the surviving players hearts full of hurt, and minds out for revenge. This round will determine the winners and losers in this game. Will Love conquer all?

Author Bio
Tywanda M.Brown was born and raised in Newberry SC. She is the proud mother of three boys. Her passion for writing developed at the young age of 11 with dreams of one day being a published author. Two years after graduating from Newberry College in the Spring of 2012 with a Business degree, she decided to make her dream come true. In the Fall of 2014 she released her debut book Love Games. Two months later she released Love Games 2: Love or Lust. In the winter of 2014 she released Literary Chick. Early spring 2015 she release Love and Snakes a book she co-authored with label mate Simply Shonda, her first anthropology Devils Daughters that she co-authored with CoCo Mixon,Simply Shonda, Dee Leshay and Nicole Shephard in late April 2015. Her latest release Love Games 3: The final Round released May 4,2015. July 4th, 2015 she released Love and Snakes 2 with label mate Simply Shonda.

Posted by Diverse Reader at 4:06 PM