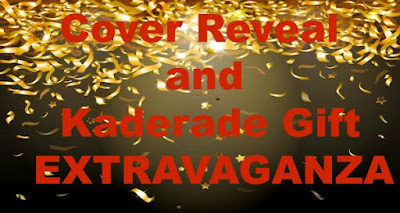 I hope you are all ready for this post! I really mean that. When Kade approached me with it, I choked. I think I stopped breathing for a few minutes. I'm fairly certain you will all have to read it a few times just to make sure you read it correctly the first time. And trust me... It's real.

First what Kade has for you is the cover reveal to his new book Borrowing Trouble (Out October 20th) the blurb, and the entire first chapter to it. Let's start with that fabulous treat first. 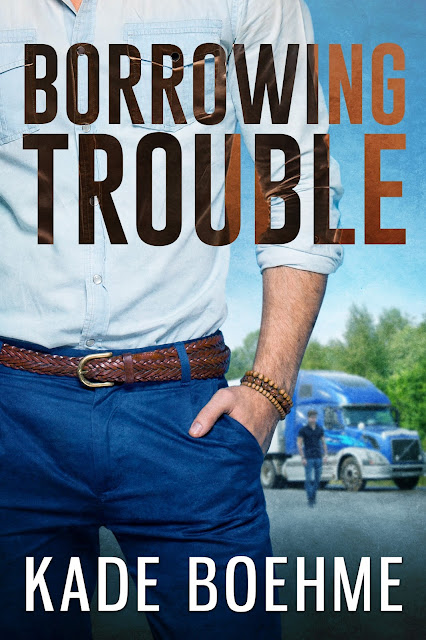 After an amicable divorce, Jay Hill decided to move back to his rural hometown with his teenage kids. Being on good terms with his ex-wife and in laws has made the transition into single life pretty smooth. Things were good and uncomplicated. Then Landon Petty walked into his life.

Landon didn’t expect to still be stuck in his hometown working at his dad’s sawmill at this point in his life. Being an openly gay truck driver was as awkward in practice as in description. When Jay came to take over managerial duties at his dad’s business, Landon was surprised to find a friend. When Jay turns out not to be as straight as he thought, things get complicated.

When feelings for Landon shine a light on how much Jay’s life has been actually half lived, he’s forced to decide if he’ll jump in with both feet or if he’ll let Landon slip through his fingers.

Landon showed up at his parents’ house the next night a little after six. He’d managed to get all the payroll checks passed out and still had time for a shower and a change of clothes. Thank God for small favors, he wouldn’t meet his new mill manager in dusty, day-old clothes and muddy boots. Not that the man would actually be paying attention, and he’d sure understand if Landon was dirty, since he presumed the man was used to dirty work clothes.
Landon had seen the man’s application and his work experience was full of welding, mechanical, and mill work. Hired as a favor to a friend or not, the man had almost twenty years of solid hands-on experience, so he was more than qualified for the position he was stepping into. He’d even been a supervisor at the steel plant he’d worked at in Tupelo before moving back to his hometown. Ms. Lynne knew the family and had shared that Jay had moved to get his kids closer to his in-laws so they’d have family around while he worked.
Landon parked his truck in his parents’ massive, dusty yard next to his father’s dually and petted their two black labs that ran out to him as his mother opened the front door. “There’s my handsome son!” She waved from the porch as Landon approached.
Hugging her neck, he greeted, “Hey, Mama.”
“Glad you could make it for dinner. You work too hard, I never get to see you anymore.”
“Hopefully this new manager is gonna change that.”
“He’s a nice man. Your daddy seems to like him.”
“That’s good,” Landon said with a smile, walking in the house and shedding his jacket. His mother took his jacket and hung it up on her overstuffed coat rack by the door. She asked him about work as he followed her to the kitchen-slash-dining room. As they approached, he could hear his father’s booming laugh, which meant his dad must really like the guy.
“Jay, do you remember my son, Landon?” his mother asked when they turned the corner into the room. Landon blinked and willed his body to behave when he took in the form of the new manager he was going to be training. Holy hell.
The man was as tall as Landon’s father, slimmer in the mid-section, but well-muscled up top from hard work. The baby blue henley he was wearing was tight on his chest and biceps, which were nicely defined. The lighter blue of the shirt set off his sun bronzed skin. His short brown hair and stubbled beard had a few lighter patches that’ll probably grey in another five years or so, but he didn’t seem all that much older than Landon. Those light patches only served to make him more attractive. Kind brown eyes crinkled at the sides with a smile that nearly took Landon’s knees from under him. Jay extended a large hand at Landon, who stood blinking for just long enough that his mother had to smack his shoulder.
Landon shook his head to snap himself out of his embarrassing daze and walked forward to shake the man’s hand. “Surely this can’t be little Landon? Last time I saw you, you couldn’t have been more than ninety pounds dripping wet.”
I’m not twelve years old any more, man. And his cock was sure reminding him he was well past puberty the way it started perking up at just the contact of their hands. “Uh, yeah. Been a while. Sorry, I don’t remember you much.”
And that was a total lie. Landon remembered now being thirteen the last time he’d seen Jay Hill. Jay’d been twenty, and he was at a Christmas party with Bethany and their baby son. Landon’s body reacted much the same as it was today. He couldn’t believe he’d forgotten how incredibly attractive Jay was, and damn if they man hadn’t gotten better with age. It was going to be torture working every day with this guy.
Thank goodness I won’t be at the mill as much.
But the glaring reminder that the man was straight made itself known as he turned to introduce his now sixteen-year-old son, Clint, and his twelve-year-old daughter, Millie. They both looked like their father, which was lucky for them because his genes had produced handsome children.
“Landon here’s gonna be training you,” Landon’s father beamed. “He’s been managing the mill while we looked for a new manager.” He patted Landon on the shoulder proudly. “He’s been a big help while we’ve been short-handed.”
Jay’s eyes went wide. “You’ve been managing and makin’ hauls?” Jay seemed impressed.
“Yeah, it’s been a long year. Glad to have someone to take some of the load.” Landon almost groaned when his brain immediately supplied a dirty connotation to his latter statement. Oh, this was gonna suck. And not in a good way.
“I’m just glad for the work. Hope I don’t disappoint.”
Landon’s father waved off Jay’s concern and assured the man he was sure they’d made the right decision bringing him on.
Regardless of his traitorous dick, Landon couldn’t help being relieved. His dad was usually a good judge of this stuff and Landon felt that much closer to being free of so much extra responsibility. He also reminded himself how long it’d been since he’d gotten laid. He would be able to go to Jackson, to the bar, and find someone for some fun once he got Jay trained up. That’d surely make the whole horny-for-the-straight-man thing easier to handle.
He hoped.

Are you still there? Hope you aren't hyperventilating yet. Because Kade has only just begun to blow your mind!

You saw this is titled Cover Reveal and Kaderade Gift Extravaganza, right?

How about we get to the extravaganza part.

4th-tier prizes would be the standard: (3 winners) Get to choose anything from Kade's back list.
3rd-tier:(2 winners) ARCs of his new book Borrowing Trouble & a back list book.
2nd-tier: (1 winner*)  $20 GC for Amazon, ARC, paper back, and back list book.
REMEMBER: Rafflecopter giveaway ends the 15th!
Winners are contacted via email. So check your spam.


GRAND PRIZE
Disclaimer: To enter the Grand Prize Giveaway you must be at least 21 years old and live in the Continental US. All entries to the grand prize must be emailed to: kadeboehmewrites@gmail.com
Contest winner will be announced on October 20th. On the release of Kade's new book Borrowing Trouble.

To explain the Grand Prize (That closes the 18th), here is Kade himself.
Good luck everyone!

Posted by Diverse Reader at 4:58 AM