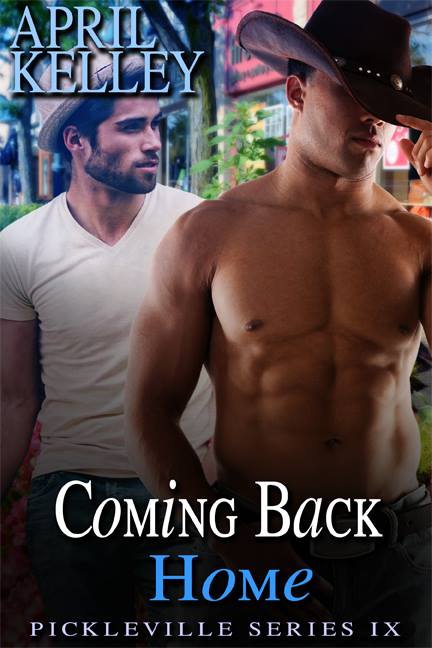 Seth Murray just might be the most stubborn man on the face of this plant. He refused to move back to Pickleville because of one fight with his father. That is until he gets a call saying that his dad has passed away suddenly. The first person Seth thinks about is the one man he gave up because of his stubborn pride. Five years ago, all Seth wanted was to be with Carter. Now he doesn’t know what he wants. And Carter has his own life. One that Seth certainly didn’t see coming when he finally reconnects with the man again. One that revolves around a certain blonde haired, blue-eyed little girl that completely melts Seth’s heart the minute he meets her.

“Then at least turn on the light.”

“No, I like it this way.” It made the conversation they needed to have that much easier. Still scared the crap out of him though, not that he would be admitting that anytime soon to anyone.

“I’ll turn on the light when you tell me what your problem is.”

“I don’t have a problem. Now, turn on the light before you trip over something.”

“Right, like you’re really worried about my wellbeing at the moment.”

“What’s that supposed to mean? I don’t want you to get hurt.”

“What are you talking about?”

“I’m talking about the way you’ve been treating me. Like I have the damn plague or something.”

He heard Carter sigh. “Seth, please. Just open the door so I can do my job.”

“The sooner you tell me what your problem is, the sooner I let you out.”

“I can physically remove you from in front of that door.”

Seth narrowed his eyes. Logically, he knew Carter couldn’t see him, but he didn’t care at the moment. Seth didn’t say anything. The more he talked the more Carter wanted to argue about everything, but the real problem. Instead, he decided to wait Carter out.

What’s In Pickleville’s Future?
The Pickleville Series was introduced in February of this year with Whispers of Home, where Jaron McAllister and Travis Heath’s story were told. Jaron comes back to the town he grew up in after his friend and mother to his child is murdered. Jaron’s sons name is Bobby. He reconnects with Travis and sparks fly.
The Sum of Everything is book two, telling Brian Stockwell and Greg Mitchell’s story came out. Brian is Jaron’s best friend since forever ago. After Jaron comes back, he and Brian hit it off, like the eight years of separation never took place. Greg is a teenager when we first meet him, but 4 years have gone by between book one and book two. By the time this book takes place Jaron’s son, Bobby, demands to be called by his middle name Carter.
Book Three, Fixing What’s Bent, tells Kyler Huffington’s story and Andrew Martinez, who is the detective from book one. Kyler is Greg’s crazy best friend. He has a thing for Detective Martinez. Jaron and Andrew become fast friends and stay in touch with each other. Andrew needs a change so he takes the Chief of Police job in Pickleville.
Book Four, A Tarnished Truth, tells the story of Brad Flynn and Kendrick Ashby. Brad bullies Jaron all, even physically assaulting him at one point. Brad has a lot of complex problems that come to light in this story. Kendrick owns TJs Bar and has a few problems of himself. In this story we’re introduced to Brad’s brothers, Luis and Caden. Of course they each get their own book.
Book five comes out, Getting Back To Good. This is Luis’ story. You’ll meet him for the first time in book three. He also works with Kyler at Hessing’s Garage and has a thing for his boss, Royce.
Owen Ashby and Neil’s story comes next. Neil is a farm hand on the Heath’s farm. You met him in book two. He’s the one that helped Greg with his song. They end up singing together at Kendrick’s bar every Tuesday.  Owen is Kendrick’s brother. That’s really all I can say about him without giving way a little of the plot for Book Six.
Book Seven takes place a few months after Owen and Neil’s story ends. JackJackson was introduced in book one. He’s best friends with Travis Heath. He was also in Book two as a minor secondary character. Since book two he has been neglected. He has a thing for the new farm boss, Dakota. Jackson, who has always had things fairly easy in life discovers what it’s like when things don’t go the way he wants.
Book Nine is Carter and Seth’s story. This will be the last book in the series. And will tell Seth’s story. He was introduced in Book two as Carter’s best friend. They lose touch after Seth’s dad sends him away to college. Father and son have a big fight and Seth is one very stubborn man. This shows in his relations with Carter when he comes back.
This will be the last book in the series, except for the small Christmas story called, A Very Pickleville Christmas. That will come out December 15th, tentatively, at eXtasy Books.

Living in Southwest Michigan, April resides with her husband and two kids. She has been an avid reader for several years. Writing her first story at the age of ten, the characters in her head still won't stop telling their stories. If April isn't reading or writing she can be found outside playing with the animals or taking a long walk in the woods.


Scattered Thoughts & Rogue Words
Posted by Diverse Reader at 5:33 AM