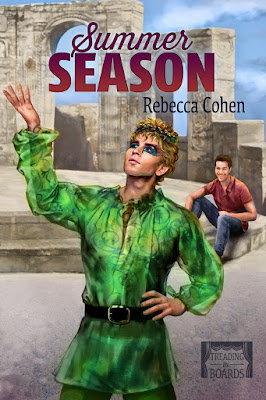 Blurb: A Treading the Boards Novella

Excerpt:
The Sarky Players began to slowly organize themselves. By the way Owen was giving out orders, Stuart suspected that he was the director, but the others didn’t seem to mind being told what to do and began carrying items from the back of the van into the top level of the theater. He wasn’t at all surprised when everything came to a halt as those who’d never been to the Minack before got their first view of the theater.
“Oh my God, look at it!” cried Penny.
The rest of the Sarky Players murmured in agreement at the sight of the amphitheater built into the cliff face and the endless sea behind.
Ryan gasped in awe, and Stuart watched him take a few steps away from the other players, drinking in the theater. Stuart couldn’t blame him.
He knew of nowhere else like it.
Perhaps Ryan wasn’t quite as shallow as he’d assumed.
Owen chivvied his troops, using exaggerated arm movements to herd them back into action. “I know it’s beautiful, but you’ll have all week to stare at it, and just think how amazing it will be to be on the stage.”
The words seemed to do the trick as the players formed a line to pass everything down the steps to the next level. Several more people arrived, making Stuart more hopeful they’d be through with the get-in and stage setup by late afternoon.
Piece by piece was passed down the chain, and having seen other productions of A Midsummer Night’s Dream, Stuart wasn’t surprised at the collection they’d brought with them. Fake trees and rolls of green fabric would be used to dress the stage as a forest. On first glance, the costumes of the fairies were gaudier than he’d seen before, but then every troupe that came down here had to fight to hold the audience’s attention. Picking Shakespeare was always a popular choice, but competing with the elements and the Atlantic Ocean were not battles most plays had to face.
A ripple of laughter made Stuart turn around while carrying a selection of fairy wings. He ground his teeth as he spotted Ryan pretending to balance on an edge of a step and wobbling about.
“Oi!” Stuart shouted, covering the short distance between them in a few long strides. “Be careful.”
Ryan turned to stare at him. “I am being careful. I was just having a giggle to break up the monotony of lugging all this stuff.”
“It won’t be a giggle if you slip and crack your head open on the way to the bottom.”
“Oh please.”
“Look, I know you think it’s a bit of fun, but no one will be laughing if we have to lift you out of here by air ambulance.”
Ryan put his hands on his hips and puffed out his cheeks. “You’re overreacting. I’m not doing anything sillier than anyone else in this line, so why are you picking on me?”
“Because you’re the one acting like an idiot.”
“Who died and made you King Joykiller?”

Bio and Links:
Rebecca Cohen is a Brit abroad. Having swapped the Thames for the Rhine, she has left London behind and now lives with her husband and baby son in Basel, Switzerland. She can often be found with a pen in one hand and a cup of Darjeeling in the other.
Blog: http://rebeccacohenwrites.wordpress.com/
Twitter: https://twitter.com/R_Cohen_writes
Facebook: https://www.facebook.com/rebecca.cohen.710
DSP author page: http://www.dreamspinnerpress.com/store/index.php?cPath=55_462
Amazon author page: http://www.amazon.com/Rebecca-Cohen/e/B007UEFIXS/ref=ntt_athr_dp_pel_1

a Rafflecopter giveaway
Posted by Diverse Reader at 5:39 AM