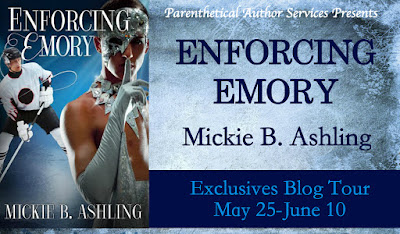 Olympic figure skater Emory Lowe falls in lust the moment he lays eyes on his new neighbor, hockey player Nikolai Vetrov. On the surface, Nik is a typical badass enforcer, intimidating and dangerous, on and off the ice. The only son of Ukrainian immigrants, Nik has been groomed from childhood to fulfill his father’s dreams of seeing him in the Hockey Hall of Fame. Igor guides his son toward that goal with a controlling—and abusive—hand, steering him clear of anyone who might ruin his chances.

Although Emory is the US National Figure Skating champion, he’s in-your-face gay, and his audacious persona rubs Nik and his family the wrong way. Raised by supportive and loving parents, Emory is Nik’s polar opposite in every way but one—his desire to succeed. Underneath the fluff and glitter beats the heart of a fierce competitor, and this side of Emory’s personality begins to close the distance between the two athletes.

While the attraction is one-sided in the beginning, Nik finds himself responding to Emory’s flirting. But before the incongruous pair have a chance at any sort of relationship, they must survive the pressures of career, separation, and most importantly, Igor’s ruthless homophobia.

I’d like to thank Diverse Reader for the opportunity to share an exclusive excerpt of my latest release Enforcing Emory.  This novel is set in a new universe—Olympic figure skating and hockey—so no catching up necessary. There’s an opportunity to win a free e-copy of the novel or a gift certificate by entering contact information in the Rafflecopter.  Enjoy! 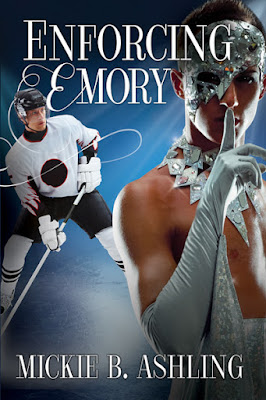 Excerpt
“One of the requests I just tossed was a charity event the Wolves are having for the Special Olympics. They want me to drop the puck at the start of a game to draw a bigger crowd and raise awareness for the cause. What if I took it a step further and offered to play? We can work it out so that the more goals I score, the bigger the donations.”
“Have you lost your damn mind?”
“It’ll be a challenge, but you know I’m always up for that,” Emory stated.
“That’s the craziest thing that’s ever come out of your mouth, bar none.”
“Why is it so unbelievable?” Emory asked with a little more emotion. “I used to play hockey way back in the day. The basics haven’t changed; I’m just rusty. With a little bit of practice, I’m sure I can put on a credible show. If it’s a spectacle people want when they see me, then I’ll give them something to talk about.”
“If you’re craving attention, go on a talk show.”
Emory shook his head. “You don’t get it, Dad. Everyone seems to have forgotten the man behind the makeup. I’m an accomplished skater and have mastered the hardest elements of my sport, yet I’m continuously referred to as that gay skater from Chicago. There’s no respect for any of my achievements. If I ditch the diva and play the hell out of hockey, then I’ll prove there’s more to me than fluff.”
“You’ve got hockey on your mind because of the Ruskie. Where is he, by the way?”
“Toronto. He’ll be home tonight.”
“Make sure and mention this to him the next time you’re over there. He’ll tell you what a bad idea this is. You’ll get clobbered for one thing, and you can’t risk that kind of beating if you want to stay competitive in figure skating.”
“What if I don’t care about figure skating anymore?”
“Don’t be insane. You’ve invested your entire life in the sport, not to mention most of our hard-earned cash. It’s time for some payback, kiddo. I’m not going to sit back and watch you make a fool of yourself because you’re feeling like Rodney Dangerfield all of a sudden. If you want people to respect you, then reinvent yourself as a figure skater.
Purchase Links

Review:
I remember last year when the Olympics was in Sochi. The riots, the violence. When figure skater Emory Lowe (openly gay) goes in hopes to win the gold he's faced with more than he bargained. Back home, his neighbor and lover Nikolai faces life as an in the closet Hockey player and an abusive and homophobic father. These two are put together and pulled apart. I always felt like something horrible was going to happen with each passing page. I was totally scared! Igor, Nik's father, is a horrible man. He's the negative side of humanity while Emory's father is the positive side. Emory's love for Nik gives him an amazing courage to face who he is and embrace it. This is a sweet love story. I loved Nik and Emory's dynamic and thoroughly enjoyed the journey to their happy ever after.

Mickie B. Ashling is the alter-ego of a multifaceted woman raised by a single mother who preferred reading over other forms of entertainment. She found a kindred spirit in her oldest child and encouraged her with a steady supply of dog-eared paperbacks. Romance was the preferred genre, and historical romances topped her favorites list.

By the time Mickie discovered her own talent for writing, real life had intruded, and the business of earning a living and raising four sons took priority. With the advent of e-publishing and the inevitable emptying nest, dreams were resurrected, and the storyteller was reborn.

She stumbled into the world of men who love men in 2002 and continues to draw inspiration from their ongoing struggle to find equality and happiness in this oftentimes skewed and intolerant world. Her award-winning novels have been called "gut wrenching, daring, and thought provoking." She admits to being an angst queen and making her men work damn hard for their happy endings.

Mickie loves to travel and has lived in the Philippines, Spain, and the Middle East but currently resides in a suburb outside Chicago.

Giveaway
Using Rafflecopter below, enter to win one of these prizes (contest open internationally): a $20 Dreamspinner gift certificate, one of five ecopies of Enforcing Emory, or an audio copy of Fire Horse. Must be 18 or older to enter.

May 25 - The Novel Approach

June 9 -  Sinfully...Addicted to All Male Romance