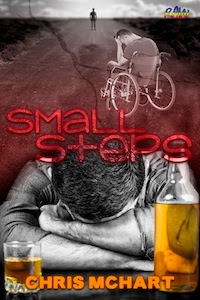 Blurb:
Ben Amann currently hates everything: The accident that temporarily put him in a wheelchair, the fact that he has to go for rehab and live in an assisted living home as well. Sebastian Hofers, the good looking but equally bad-tempered new assistant to his rehab therapist changes that.

Sebastian has two choices after causing an accident while driving drunk: community service hours or go to jail. The decision is a no-brainer, and so he meets Ben at the rehab center. The two of them hit it off and slowly, Sebastian sees more than just a patient in Ben.

But their growing relationship faces hard trials, not only because of Sebastian’s heavy drinking, but also because of the truth: The two of them already met on an icy street, eight months ago.

Can love and forgiveness overcome the overwhelming guilt and resentment?

Contains: Two ill-tempered men, a lot of hang-ups, a shared hope, and a destroyed dream.

Two men, both angry at the world. One, Sebastian, an alcoholic, jerk, bit self-centered. Common alcoholic basically.  Then we have Ben, paralyzed because on Sebastian’s drinking. He’s kinda in the right to being pissed at the world so I gave him that. When Sebastian is forced to work in a rehab center (as part of his sentence) and it happens to be where Ben was… I saw where this was going. Neither knew each other, or the impact they had on each other’s lives.
Watching the friendship blossom was really awesome. Great friends, before the realization. Ben was fabulous and I really loved him. The pacing was a little slow and there was some drag to the book. I liked how it was set in Germany but I didn’t have to scrounge around to know what the heck the author was talking about because it was in English. Reminding myself they weren’t speaking English only hit me when the setting of the story was discussed.

This is a story about two men coming to terms with the cards they are dealt. Having each other help the other be stronger, braver, and believe in turning bad into good.

It’s a love story but it’s more of a living story.


How do I find my titles?
This is one of the hardest things for me. I have serious trouble coming up with them. They should be unique, they should be catching and they should fit. But, how to find them?
Sometimes, the middle trick works. In my finished WIP, I go to the middle and read. Often, there is a sentence in there that brings me to the title. (I stole this from the book: Writing Your Novel From The Middle by James Scott Bell). Sometimes, I play around with the message of the book. That’s what I did with Small Steps.
It’s not only about Ben being in a wheelchair, but it’s about all the small steps you have to tackle in order to get back to life. Ben after his accident, Sebastian with his addiction. Every day is a new, small fight, yet a step towards getting better.
I hope you’ll find the title fits the story, even if it’s not so unique.
How important is the title for you as a reader? And how do you feel if a title doesn’t fit the story very well?

Chris McHart lives in Germany, with her husband, slave, Dom, partner in crime, and muse (all in one person, not even she’s that kinky!). She loves her husband, men in kilts and Scotch Whiskey. Her idea of a perfect evening is to curl up with her laptop and write (the other options are not suitable to post in public).

Giveaway
Chris McHart will be gifting one person a signed paperback copy of Small Steps.
This is an International contest so anyone can enter to win.
Contest will run until September 27th. Winner will be contacted via email so please check
your spam. Thank you, Chris, for being here today. Congrats on your new release!!!