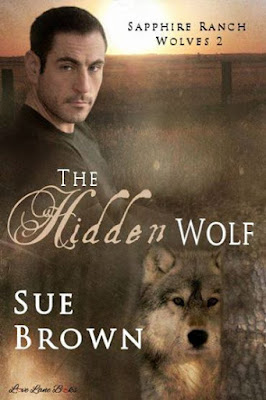 
Blurb: Sheriff Milo Clarke has met his mate, Eli Watkins, and now they're conducting a long distance relationship while Eli runs Cavalry, the security firm protecting Joe and Cal at the Sapphire Ranch from the hunters.
The long distance loving is hard on all three of them, Eli, Clarke and Clarke's wolf, who is becoming more restless as Clarke refuses to shift. When Clarke going to give into the other side of him and how will Clarke and Eli resolve the distance between their lives?

Sheriff Milo Clarke leaned against the kitchen cabinets as he watched Eli Watkins and his team, the Calvary, remove the remains of Randy Streerson from the kitchen of Sapphire Ranch. He’d offered to help and been told firmly to stay the hell out of their way as they committed a felony.
Staying to one side was a damned sensible move. What used to be Randy Streerson, the head of a group of hunters that pursued and killed shifters, now covered the kitchen walls, floor, and dripped from the ceiling after young shifter Callum Pope shot him with one of the hunter’s bullets.
Cal was a distant shifter relative of Milo’s. His father had been related to Milo’s mother. Cal’s father and two elder brothers had been killed by a band of hunters led by the Streerson family. The pack had splintered in an effort to survive, and Cal had turned up on Sapphire Ranch after running hundreds of miles to get away from the hunters, only to discover the owner of the ranch was his mate. A lot had happened in a few days. Eli’s men took away what remained of the body and now they scrubbed the kitchen, surprisingly efficient. Milo didn’t have to be a cop to know this wasn’t the first time the Cavalry had cleaned away evidence that a murder had taken place.
He was stuck between duty and likely survival. On one hand he’d witnessed the struggle between Cal and Streerson for control of the gun before Cal had pulled the trigger. On the other…
How the hell would he explain to his deputies what had just taken place? They would want to know where he’d been hiding for the past few days, why he’d been lying to them, who the victim—who was no fucking victim—was, and what the hell was a shifter?
He was a shifter. At least a half-shifter. His mother had been a werewolf and Milo could change, he just chose not to. Instead he lived among the humans as a sheriff and hadn’t given in to that side of him for over five years except for one glorious moment a few days ago. Milo tried not to think about it even as his wolf grumbled inside.
Milo watched the team—at least he watched Eli. His whole attention was focused on the dark-haired man. Just watching him made his mouth dry and his dick hard. From the second Milo had shifted to prove the existence of werewolves to Eli and his assistant Ross, he’d realized that Eli was his mate.
Unable to resist, he’d trotted up to Eli and laid his head on his lap. Tentatively Eli had stroked his head, and Milo leaned into the caress, wanting Eli to touch him more. Eli filled his wolf senses. He smelled woodsy with a touch of citrus. He smelled good.
“Good doggy,” Eli had murmured.
Doggy? Milo gave a low growl at the insult, grinning in wolfy satisfaction as Eli snatched his hand back. He wouldn’t have hurt him—much.
And Eli had seemed equally drawn to him, finding it hard to take his eyes off Milo, even as they’d talked strategy with Joe, Cal’s mate and the owner of Sapphire Ranch.
But they hadn’t gone near each other, hadn’t touched each other at all beyond that one brief contact. Milo had been relieved because they had needed to focus their minds, not their dicks, to defeat the hunters. Relieved—and frustrated beyond belief to have his mate so close and not be able to touch him.
There was another issue. They hadn’t connected telepathically.
Milo had thought that happened immediately. But he was only a half-shifter, with limited shifter abilities in his human form, and Eli was a human. What would happen if they didn’t connect? Could they walk away from each other? It would make life so much simpler.
Milo caught Eli frowning at him, and he looked away, feeling guilty. Eli didn’t need to know. They hadn’t connected. He need never know. Milo’s wolf howled inside him at the thought of walking away from his mate, and for once Milo didn’t try to hush him. The thought hurt his human side just as much. But Milo had spent his whole life hiding his true nature, and now, through no fault of his own, everything he’d worked to hide was liable to be exposed. Among humans he hid the fact he was half-shifter. Around shifters he tried hard to fit in, even though his human side affected his wolf senses. And with both communities he hid the fact he was gay.
Milo had spent his whole life in hiding and with one phone call Joe had exposed him to humans—both as shifter and as gay. He wasn’t fucking ready for it. And didn’t that suck?

Sue Brown is owned by her dog and two children. When she isn't following their orders, she can be found plotting at her laptop. In fact she hides so she can plot and has gotten expert at ignoring the orders.
Sue discovered M/M erotica at the time she woke up to find two men kissing on her favorite television series. The series was boring; the kissing was not. She may be late to the party, but she's made up for it since, writing fan fiction until she was brave enough to venture out into the world of original fiction.
AUTHOR LINKS
Facebook: https://www.facebook.com/suebrownstories
Facebook Page: https://www.facebook.com/SueBrownsStories
Twitter: https://twitter.com/suebrownstories
Google+: https://plus.google.com/+SueBrownstories/
Blog:http://suebrownsstories.blogspot.co.uk/
Website: http://www.suebrownstories.com/
Email ID: suebrown.stories@gmail.com


May 26: Elisa - My reviews and Ramblings || Wicked Faeries Tales & Reviews


May 29: Cia’s Stories || Fangirl Moments and My Two Cents