Embrace the Fire
Through Hell and Back # 3
By: Felice Stevens
Releasing May 26th, 2015
Loose ID 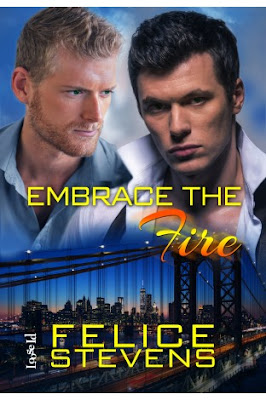 Brandon Gilbert has spent years in hiding, but finally he’s accomplished his dream of working as a public school teacher. When offered the chance to help bullied children, there was no way he could say no. Not to mention that meeting Dr. Tash Weber, the psychiatrist who helps them, a sad yet sexy older man, ignited a spark inside Brandon he’d never had before.


Though five years have passed since the death of his lover, Dr. Sebastian "Tash" Weber has no interest in relationships or love. But young, enigmatic Brandon awakens his heart and his desire. Despite Tash’s best efforts to push him away, Brandon unlocks the passion for life Tash thought he’d lost forever.


Falling in love wasn’t part of the plan for either Brandon or Tash, but neither family disapproval nor self-doubts can stop them from embracing the fire that burns between them. And when Brandon returns home to fight for a future he never imagined possible, he and Tash discover that the one thing worth fighting for has been with them all along.

EXCERPT
A bit apprehensive, Brandon waited for Gage on the corner of Van Brunt Street in Red Hook. He was familiar with the area, having been to the Ikea to buy furniture for his apartment and Fairway to buy food. It had seen a resurgence in the past few years with young people, driven out of Manhattan and other areas of Brooklyn like Williamsburg by high rents, coming to live and work in Red Hook. Still, the overall fog of poverty hung over this corner of the city like a dark shroud.

The nerves had nothing to do with the area; he’d lived on the streets long enough to remember how to take care of himself in most situations. It was putting himself in a new environment, meeting new people. Exposing himself. The potential for discovery was enormous.

Yet he couldn’t refuse Gage. In the back of Brandon’s mind he wondered if he and his brothers had had a place like this when they were growing up, perhaps his family would be intact today.

He drew his resolve around him like a shield of armor and promised to do for these kids what society had failed to do for him.

Protect and save them.

Darkness spread rapidly, and the streetlights glowed on, beaming out mellow golden pools of light down the block. Brandon idly watched a man exit the deli across the street, hefting a bag. He stood under the streetlight, and like a beacon, it shone on his waving brown hair and glinted off his tortoiseshell glasses. He must be close to forty, Brandon mused, taking in the man’s long legs, pausing at his handsome face. Unaccustomed heat flooded through him.

It had been months since Brandon had thought about sex or had a physical reaction to any man. Even when he’d been with Zach, his emotions remained muted, the gropings and mutual handjobs between them merely a means to an end. The times he’d been with Zach had always left him unsettled, edgy, and a bit depressed, as if some glorious secret, the one everyone became all dreamy-eyed about when they spoke of their lovers, remained tantalizingly out of his reach. Brandon yearned for an intimacy he knew was out there yet had never experienced.

Averting his gaze so the man wouldn’t think he was staring, Brandon nevertheless tracked his progress as he crossed the street and entered the clinic. Perhaps he’d be lucky enough to catch a glimpse of him when the meeting was over. He was extremely good-looking.

“I hope you haven’t been waiting long.”

“Did I scare you? Sorry about that.” He pointed at the clinic. “That’s where we’re going. Why don’t we head inside? I can introduce you to Dr. Weber and get you settled.”

Brandon shrugged. “Sure. Is anyone else coming from school?” It still disturbed him a bit that Gage had asked him. As if the man had somehow figured out Brandon had a secret and peeled back the layers he hid behind, exposing his core.

“Nope, only you.” Gage patted him on the back. “You’re my first victim.” He laughed, and though Brandon joined him, that uneasy feeling settled in the pit of his stomach.

They entered the low-rise brick building, and Brandon was immediately struck by the vibrant, almost electric energy inside as Gage greeted the young woman at the front desk. This was a place of action, where things were accomplished, goals were achieved. Brandon came to a standstill, looking at the pictures on the wall behind the front desk of all the doctors who worked there, he presumed.

“That’s Dr. Drew Klein.” Gage pointed to a picture of a dark-haired man in his midthirties with a nice smile and light green eyes. “This clinic was his dream, and he started it and brought his two friends in on it. Dr. Peterson is an orthopedist”—Gage indicated the picture next to Dr. Klein’s of a handsome blond-haired man—“and Dr. Levin is the dentist. The three of them run the medical center.”

Once again, regret pricked Brandon’s heart. If only… But past regrets wouldn’t help present problems. “They sound like amazing people. Not many doctors would willingly come to a poor area and work with people who most want to forget.” He followed Gage down a hallway to the back of the building. They passed examination rooms and offices. Finally they stopped in front of one of the closed doors, marked Conference Room.

“And Dr. Weber, the psychiatrist who is starting this program, is also a great guy.” Gage knocked on the door, then opened it without waiting for an answer. “I have a feeling the two of you will hit it off.”

REVIEW
I'm going to miss these boys. *sigh* Felice has taken us full circle. And I'm going to say that this journey around this circle of fire has been fierce. 3 men, shattered, separated, searching. We followed Ash, and Luke, now we get to follow Brandon. The youngest of the brothers. Oh how I got goosebumps, I held my breath to the point I almost passed out. And Felice didn't disappoint. This was the reunion to end all reunions! You know that feeling you get when you've missed someone, or you've been dying to feel them? With each passing book in this series that need grew and now comes the Embrace. The final hurdle. This series has played with every emotion. I laughed, cried, screamed,and fell in love. Brandon and Tash's story is magical. I adored how Felice closed this series off. No loose ends. Peace, beauty, and a happily ever after. I let the fire lick me, Walked through it, endured the pain After the Fire, and yes, I happily embraced it in the end. Bravo, Felice!!!

Author Info
I have always been a romantic at heart. I believe that while life is tough, there is always a happy ending just around the corner. I started reading traditional historical romances when I was a teenager, then life and law school got in the way. It wasn’t until I picked up a copy of Bertrice Small and became swept away to Queen Elizabeth’s court that my interest in romance novels became renewed.
But somewhere along the way, my tastes shifted. While I still a juicy Historical romance, I began experimenting with newer, more cutting edge genres and discovered the world of Male/Male romance. Once I picked up her first, I became so enamored of the authors, the character-driven stories and the overwhelming emotion of the books, I knew I wanted to write my own.
I live in New York City with my husband and two children and hopefully soon a cat of my own. My day begins with a lot of caffeine and ends with a glass or two of red wine. I practice law but daydream of a time when I can sit by a beach somewhere and write beautiful stories of men falling in love. Although there is bound to be angst along the way, a Happily Ever After is always guaranteed.