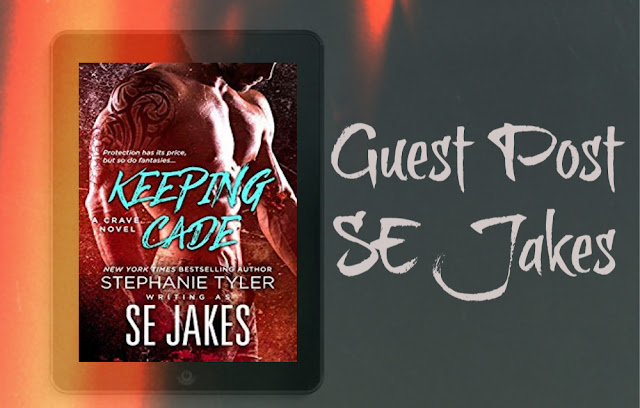 Diverse Reader is super excited to have author SE Jakes (Stephanie Tyler) with us today! I'm a long time fan and when you're a fan you know meeting or talking with your favorite authors is daunting. Well, SE Jakes is probably one of the kindest, funniest, most delightful out there. Her new book Keeping Cade shows you why shes doing what she does. Her talent is amazing! She's got a guest post for you a look at her new book and a giveaway where there are two winners. Check it out!

Thanks so much for having me here at Diverse Reader!

I’m SE Jakes and my new release, KEEPING CADE, is an MMM romance and it’s the 1st book in a new series called Crave.  Crave is the name of a bar / club that readers first stepped into with BOUND BY HONOR: Men of Honor Book 1, which came out 8 years ago this past March. **

Readers have always asked if I’d be writing more in the Men of Honor series, and I was always open to that, if the right story came along.  The right story finally did, but the MOH series had been finished for years…so while Cade and Co. lived in that world, they also had their own energy.

I always say that my characters walk on fully formed, ready to either spill their backstory or sit and stare at me until I yank it out of them. They’re usually broken when they come to me.  Half the time, they fight what’s good for them, because they’ve been fighting for so long, they’re not sure of any other way.

Sometimes, one of them will wait in the wings for a long time, and if that happens, it’s usually because his other half hasn’t announced himself yet.  So we wait, patiently.  Or not.

For example, Cade burst onto the scene, fighting. Literally, that was the first flash of scene I had of him, fighting Vic.  And then Vic was fighting Tegan, and while they all came out of nowhere, they were easy—relatively speaking.  And then more characters came out of the woodwork, like they’d been waiting for me to realize that Crave Club’s been open this entire time and they were ready for me to help them find their other half.  And they all wanted me to write them right now.

And then Strider peeked his head out and glared at me before inserting himself in KEEPING CADE.  And I was like, “this isn’t my fault—I’ve been waiting.”  And I have been.  The files with his original scenes (that will one day end up in his book) are probably from 2013 or so.  I kept presenting him with different options, but he’d turn his back.  I was putting him with the wrong tribe or the wrong person, trying to force things…and he’s been silently judging me ever since.

He’s still judging me, by the way, but from what I’ve heard from readers, they’re pretty happy with him.  It happens that way a lot for secondary characters—I know myself, as a reader, I tend to fall for a lot of them.

So, in order to be eligible to be entered to win one of (2) $5.00 Amazon Gift Cards, talk to me about your favorite characters who started off secondary characters and spoke to you.

** You don’t need to have read the Men of Honor series to pick up KEEPING CADE.  But if you like it and you like Law, you’ll want to pick up at least Bound By Honor and Bound By Law, since that will tell you more about him.

KEEPING CADE is in Kindle Unlimited (and the rest of the series will be as well).  Book 2 is SAVING SWAY and it will be out in late June, followed at the end of August / beginning of September with TAMING THEO, with many more to follow.  The Men of Honor series is now also in Kindle Unlimited for the first time. 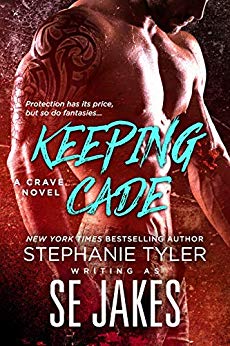 Protection has its price, but so do fantasies…

Fantasy Week happens twice a year at Crave, and it’s always a big hit—a way to live out your wildest fantasy in a safe, sane, and consensual manner.

But when Cade comes in with his Fantasy Week invitation, he’s not happy about it. He’s stoic as hell and his preferences don’t seem to match his fantasy at all…and yet, despite that, he enjoys himself with Tegan and Vic. At least at first.

When it becomes glaringly apparent that the fantasy isn’t something Cade’s comfortable with, it’s confusing for the men he’s been paired with, and Tegan and Vic put a stop to the scene immediately.

What Cade doesn’t know is that Tegan and Vic are not only co-owners of Crave, but they’re also owners of a mercenary group, Gray Ops, that’s run out of Crave. They’ve also been circling each other for years… but nothing sparks until their session with Cade.

What happened in Room 4 is something none of the men can forget…but it’s got nothing to do with a fantasy and everything to do with blackmail. Can Tegan and Vic help Cade keep his secrets, while keeping all of them safe at the same time? Because the threatening to spill out aren’t only Cade’s…

SE Jakes writes m/m romance. She believes in happy endings and fighting for what you want in both fiction and real life. She lives in New York with her family and most days, she can be found happily writing (in bed). No really…
You can contact her the following ways:
She spends most of her time writing but she loves to hear from readers!