Diverse Reader is so thrilled to have author Jodi Payne here today talking with us about her new book, Stable Hill. I for one, am very excited to get my hands on this! There's a giveaway at the end so make sure to enter it. Enjoy!

Stable Hill is centered around a horse farm in rural Pennsylvania and is about three very different men. A widower with a day job and four kids who is trying to sell the farm, a polished realtor that finds most of his dates on Grindr and wants to make a buck, and a young farm manager who has finally found a home at Stable Hill and is worried about losing not just his job, but his home.

Along the horse-barn lines, I’ll tell you my favorite riding story.

I grew up in New Jersey around cow and horse farms. Almost everyone I knew rode except me. But when I got older, I decided to learn as an adult, and I got very comfortable on horseback. I did learn to jump riding hunt seat, but I wasn’t very good at it, and was happy just knowing how to canter and how to handle and care for the horses.

So, on the day before my wedding, the lovely woman that is now my wife and I went riding in Vermont. I was given a sweet old horse to ride named Fred. He was thirty-five at the time – yes, thirty-five, and sixteen hands tall. He wasn’t going to jump or gallop, but he could canter, and he was perfectly happy to take little afternoon trail ride with me.

He was also smart and took care of his rider. We were trotting and he stepped into a hole that neither of us had seen. He managed to get his foot out but stumbled forward and to the side and I was a goner. But to keep me from getting hurt, he hit the dirt with his front end and I was able to half-jump, half slide down over one shoulder. I tweaked my knee and we both limped back to the barn, but we were both okay.

I could have easily gone flying over his head, but he saved me. Fred died a couple of years later and I still think about him. He was a big, sweet, lovable guy and I remember him fondly.

Russ, the farm manager, also has some horse stories. He’s the best of horse people and I loved writing him. I hope you enjoy all three men, but today I’m giving props to Russ. 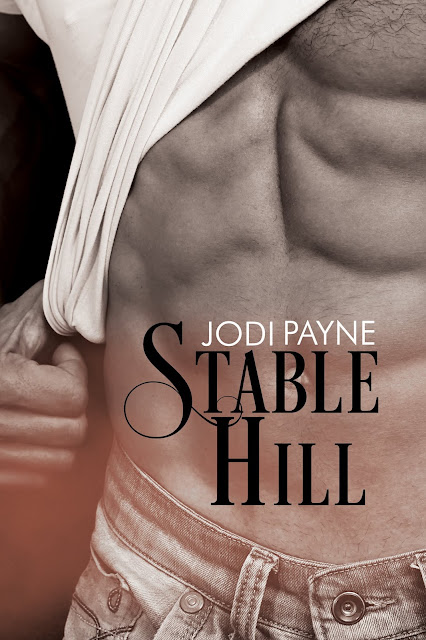 Will three men from very different backgrounds find a home and a future together?

Russell White manages the day-to-day at Stable Hill. Russ had loved Oscar’s dad like a father, and took on even more responsibility when the old man fell ill. He is shocked and saddened by Oscar’s decision to sell.
All three men have a stake in Stable Hill, and it’s not long before they start to invest in one another too. But their complicated relationship doesn’t make having to sell Stable Hill any easier. Will the fragile triad they’re building last when the farm that brought them together is gone?

Jodi Payne spent too many years in New York and San Francisco stage managing classical plays, edgy fringe work, and the occasional musical. She therefore is overdramatic, takes herself way too seriously, and has been known to randomly break out in song. Her men are imperfect but genuine, stubborn but likeable, often kinky, and frequently their own worst enemies. They are characters you can't help but fall in love with while they stumble along the path to their happily ever after.
For those looking to get on her good side, Jodi's addictions include nonfat lattes, Malbec and tequila any way you pour it. She's also obsessed with Shakespeare and Broadway musicals. She can be found wearing sock monkey gloves while typing when it's cold, and on the beach enjoying the sun and the ocean when it's hot. When she's not writing and/or vacuuming sand out of her laptop, Jodi mentors queer youth and will drop everything for live music. She lives near New York City with her beautiful wife, and together they are mothers of dragons (cleverly disguised as children) and slaves to an enormous polydactyl cat.

For your chance to win either a backlist ebook or a $5.00 Amazon GC
Fill out the rafflecopter below.
Contest will end  May 28th
Thank you