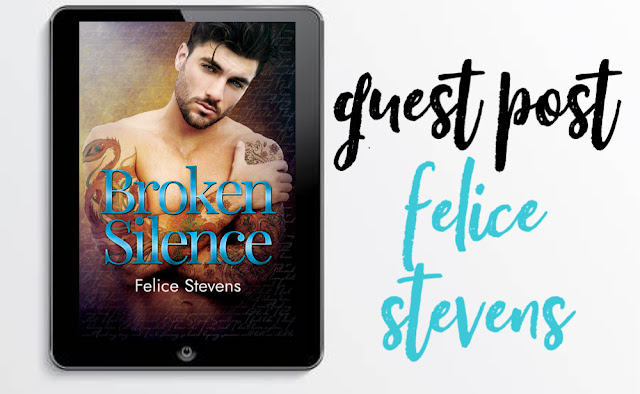 We are so excited to have Felice Stevens here talking about her process, her experiences with writing, the evolution of so many characters we've fallen in love with, and her new release Broken Silence. Get comfy, folks, this is a good read.

I’m one of those authors who, unless I’m writing a series, never really knows what book will happen next. When I finished the Man Up series last year, I knew I wanted to write a few stand alones, almost as a palette cleanser. I wanted to step away from that interconnected world and write something that would have a beginning and an ending for my characters.
I wrote His Uptown Guy in my Landmark series and then the idea for The Coincidence hit me and I had to tell Coby and Eli’s story. But while I was in the home stretch of that, I began to think, “Uh oh. What’s next?” I toyed with several ideas but nothing hit me. I was having a late night chat with one of my book friends and she asked me the same question. When I said I didn’t know what was coming next, she said, “You should write a forbidden romance. Something smutty.”
I like smut. LOL. Not going to lie, I think we can all use a little smutty times in our reading lives. So my friend and I chatted some more and the idea popped up with Professor/Student romance and I said “Huh. I could write that.”
So began Broken Silence, which was supposed to be another stand alone, a short, quick smutty little book. But then I started to write it and there was something about Justin that pulled at me and I had to dig deeper into his background. What made him so prickly? Why did he have all this pent up guilt? And slowly he unfolded.
The same with Foster. He wasn’t going to be that man to use his power to influence a student. From the beginning I wanted him to be as conflicted as possible about his attraction to Justin. The first time a student caught his eye. The first time he’d have a physical relationship with a man. A seventeen-year age gap. In other words, hurdles to overcome. After 86,000 words, I think they made it to their HEA.
Let’s face it I’m not a short writer.
If you’ve read my books, you’ll know how much I love to revisit previous characters. I confess. I have a hard time letting my guys go. So in many books you’ll find a little Easter egg where a character from one book will pop up. Before I published and was a reader, I loved when authors showed me snippets of favorite characters after their stories were finished. I never, ever plan this. It’s an organic process that I, and many readers have told me they love.
Several things happened in Broken Silence. It started out as being a standalone but Harding’s best friend, Ross is way to big a character with an even bigger personality so he will have his own book. But there’s also Benny, my sweet, redheaded Benny who has been angsting over Gino for several years at this point. You met Benny in the book Perfect and I wanted his and Gino’s story from the start.
So as you see, what began as a one book stand alone will now be a three book series. I’ve called it the Rock Bottom series, because all the men have hit such low points in their lives they don’t believe there’s any way to find their way back.

You can find Broken Silence on Kindle Unlimited for a special release price of $3.99.