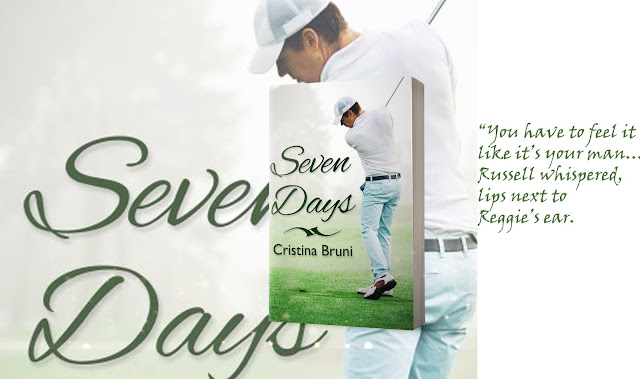 During a golf tournament in Virginia, American golfer Reggie Weston meets Russell Lee, the British former world champion in the sport. The two men hit it off when Russell takes Reggie under his wing, teaching him the tricks of the game.

As their friendship deepens, Reggie finds himself falling in love with the Englishman, though he knows Russell doesn’t feel the same. He’s painfully aware of the fact that Russell isn’t gay.

Is seven days enough time for Russell to break through the years of hurt and accept the new direction fate has in store for him and Reggie?

Reggie looked around, hands deep in his pockets and head up. He had been to the practice area a few times, but under the pale moonlight alongside Russell, the place had a completely different charm.
He caught up with the English player on the green field, but chose to stay a step away from him. He stared as Russell mimed the movement, and thought how charming he looked in the night light: Russell Lee, with a golf club in his hands, seemed to brighten with the intensity of a star, and would continue giving the world his light even if he were gone.
“Hey, Weston. Do you want to come over and play or do you want to wait until they close?” Russell asked, bringing Reggie’s musings to an end. “Let me see how you putt.”
Putting…well, he was a professional player, so he could do it. Or not?
He took the club from Russell’s hands. Then, instinctively, he moved his hand to the back pocket of his trousers: no, he hadn’t

brought his gloves. No need for one for the putter. He blushed. “Does it feel good in your hands?” the Englishman asked
in a kind voice. Russell treated him as if he were a child, and Reggie didn’t know how to react.
“Well, maybe it’s a little too long for me…”
Russell returned the club to its place and brought back another.
“Mmm, so you use a shorter one? After all, you’re dinky.
Try this one. It’s three inches shorter.”
Dinky? He wasn’t as tall as Russell, but “dinky”…Reggie grunted a protest while taking the club.
That was better, at least, it seemed to be. Keeping his hands still, he swung slowly like a pendulum.
“It has to feel it good in your hands,” Russell said. “You have to feel like it’s yours.”
Reggie widened his stance and leaned forward slightly, elbows bent. He swung the club a couple times, but when he was ready to strike, something happened.
Russell stayed his hand with a tight grip.
“You have to feel it like it’s your man…” he whispered, lips next to Reggie’s ear.
Reggie trembled, body shaking as if it were buffeted by a hot and devastating wind.
God, his hands…his hands on mine.
“Close your eyes, Reggie,” the Englishman continued, his hot breath dangerously tickling Reggie’s earlobe.
Reggie, he called me Reggie. Oh my.
He felt Russell coming closer, filling the little space between them. Russell’s pelvis touched Reggie’s lower back, an innocent gesture that confused him totally. And excited him.
Reggie gasped for air, and his heart beat faster as the Englishman’s warmth wrapped him like a soft wool scarf.
“Do you know about lower dantian breathing, Reggie?” Russell asked, blowing on Reggie’s skin.
“I…I’m not sure,” he blabbered. He couldn’t think straight.
Even if someone had asked him when his birthday was, he wouldn’t have been able to remember.

“Before a difficult shot, close your eyes. The world doesn’t exist anymore; it’s just you, your golf club, and the ball. Let yourself go, free yourself, and connect with your breath, Reggie…”
Reggie obeyed. He closed his eyes as if preparing for the most important shot of his entire career. He was completely at Russell’s mercy and, for the first time, he wanted nothing else for the rest of his life.
“For the Chinese, the origin of your breath is here, in the
dantian point.”
Russell’s left hand let go of Reggie’s to gently rest on his belly. His touch was so hot, Reggie could feel it even through the T- shirt. He shivered under the pleasure as turmoil cascaded over him.
Russell’s hand moved slowly, finding Reggie’s belly button, then it stopped.
Reggie swallowed—twice—and his dick yanked in his trousers. He couldn’t deny it anymore. He had an erection, for Russell and in front of Russell, on the practice green. He’d die of embarrassment if he survived the excitement…
Maybe the British player hadn’t noticed it, maybe the soft lights had done their job.
Maybe…
Reggie closed his eyes and moistened his lips. He and Russell Lee—he had never felt as alive as when he was next to the man.
Then Russell drifted two fingers under Reggie’s belly button and left them there.
“Concentrate on your breathing, Reggie. Breathe deeply, until here, in the center of your belly…” He pushed his fingers a little lower than Reggie’s belly button and, under that pressure, Reggie feared he wouldn’t be able to resist. “While you breathe, keep your eyes closed and visualize the right posture, the correct grip, the path your ball will make…”
The more Russell spoke, mouth moving closer to Reggie’s ear, the more his voice dropped to a whisper.
“Hit it, now,” he ordered, letting Reggie go.
Reggie obeyed, mechanically. He hit the ball while keeping his eyes closed, and he heard it roll into the hole, a perfect shot.
Reggie opened his eyes again. His head spun, as if he’d just gotten off a roller-coaster. The Englishman smiled, proud of his teaching, then put one hand in his pocket.
“You know, Westie,” Russell said, bent bending over to retrieve the ball, “one day you’ll win your first tournament and I’ll be there to congratulate you with a pat on your shoulder. Take that as a promise.”

Cristina Bruni lives in northern Italy with her husband and their child. She’s already published many M/M novels in Italy with Triskell Rainbow publisher. Since she was a young girl, her biggest wishes were being a mother and an author and now, after fighting for it for years, she finally succeeded in both. She loves travelling abroad, going to the cinema, reading Sherlock Holmes, luxury bags and playing tennis and golf. She’s madly USA-sick and UK-sick.
She made her debut writing fanfictions and, now, her new wish would be writing love Male-to-Male stories for the rest of her life and living on a beach in Hawaii.
Maybe dreams will come true again, sooner or later...

To win a copy of Seven Days enter the rafflecopter below.
Thanks!

a Rafflecopter giveaway
Posted by Diverse Reader at 10:49 AM